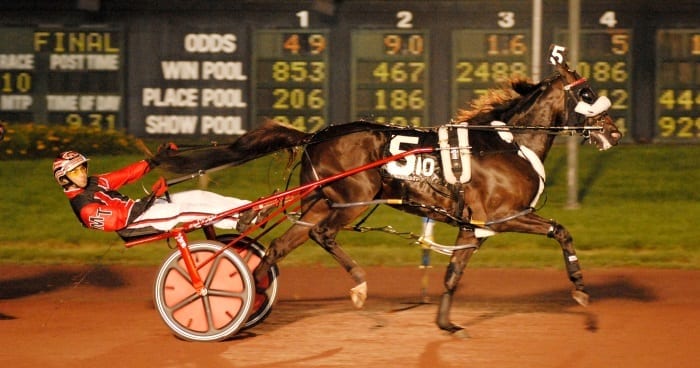 Wiggle It Jiggleit Leaves No Doubt in Hempt

WILKES-BARRE, PA – So, he isn’t perfect. Wiggle It Jiggleit lost claim to that status when beaten in the finals of the North America Cup, where he was a surprising second behind Wakizashi Hanover. So, let’s just say he’s very good. Or very, very, very, very, very good.

Wiggle It Jiggleit moved back on top of the 3-year-old male pacing division with a decisive win over the best of the best in last night’s $500,000 Max Hempt Memorial at Pocono Downs. In the process, he left no doubt who is the best 3-year-old pacer in the land and who is the horse to beat in the Meadowlands Pace.

“He showed what kind of horse he is,” winning trainer Clyde Francis said. “He showed lot of grit in the North America Cup. The other horse tripped out behind him and he got beat. It was just one of those things. He showed he’s a great horse tonight.”

Wiggle It Jiggleit’s 1 1/2-length win over Artspeak was the highlight on a huge and exciting night of racing at Pocono Downs. The festivities included a win by JL Cruze over Sebastian K in the Pocono Downs Invitational, an upset victory by Bettor Be Steppin in the Lynch and a game win by Luck Be Withyou in the Ben Franklin. And what would a big night at the races be without a major win by Jimmy Takter? Takter came through in the Earl Beal, finishing one-two with Pinkman and Uncle Lasse.

Wiggle It Jiggleit had won his first 11 races and, despite his a modest pedigree, some were beginning to believe he might be one of the best ever. The bloom came off the rose a bit when he suffered his first career defeat in the final of the North America Cup. Owner George Teague Jr. never lost any faith in his gelding and thought a rapid early pace might have done his horse in in Canada.

Wiggle It came right back and won his elimination for the Hempt but the real test was last night. Not only would he have a rematch with Wakizashi Hanover but he would also be facing the highly regarded Artspeak and In The Arsenal, another tough customer.

One thing was certain early on, his competitors were not going to take it easy on him. With Montrell Teague driving, Wiggle It Jiggleit didn’t go right to the front, but instead made a brush for the lead pacing past the wire for the first time.

He got to the half in front, but a 53.4 fraction was cause for concern. Longshot Pierce Hanover took a crack at him, but he was done after three-quarters. The real threat was Artspeak. He was sitting in the pocket getting a beautiful trip and ready to pounce. In the stretch, he came alongside Wiggle It Jiggleit but the Delaware-based gelding looked him in the eye and said goodbye.

“This horse never disappoints me,” Teague said. “Even when he lost I wasn’t jumping off his bandwagon. He’s just a good horse. Those were big fractions tonight, so it was impressive that he sprinted home the way he did. I was worried tonight because there were five or six horses in this race that can really go. But he got stung and they looked him in the eye and he still won. He proved me right tonight.”

With the track hit by some rain earlier in the night and with the temperature in the seventies, the Pocono surface wasn’t as fast as it can be. The final time for the Hempt was 1:48.2 and Wiggle It Jiggleit paid $2.60.

Artspeak was second and In The Arsenal was third. Wakizashi Hanover was fourth.
The group will now move on to the Meadowlands for next week’s elims for the Meadowlands Pace. Maybe Wiggle It Jiggleit won’t win everything, but it looks like he’s going to be the horse to beat every time he shows up.

“I felt good (about the Meadowlands Pace) when I first started talking about this horse in January,” Teague said. “You know how cocky I was. I still think he one of the best 3-year-olds to come around in a while. But this is a very good group.”

The race was worth just $75,000, but the Mohegan Sun Pocono Invitational figured to be one of the highlights of the card, and it more than delivered on that promise.

The race was a two-horse race on paper between last year’s older male trotter of the year Sebastian K and the red-hot JL Cruze. After battling an ulcer, Sebastian K was making his first start of the year while JL Cruze had been among the hottest horses in the game, winning 13 of 15 on the year.

The race was nothing short of a barn-burner. Sebastian K, the 9-year-old, took over from Gural Hanover and had the lead turning for home. Driven by John Campbell, JL Cruze took up the chase but Sebastian K spurted away briefly and looked like a definite winner. Instead, JL Cruze fought valiantly in the stretch, surged at the wire and won by a nose.

“My horse just keeps digging,” Campbell said. “I didn’t know how much Sebastian K had left, but my horse gives his all all the way to the wire, so I wasn’t giving up. I knew my horse would give a great effort.”

JL Cruze has been one of the great stories in harness racing in 2015. Trained by Eric Ell, the 4-year-old gelding by Crazed earned just $26,297 last year, but came back this year to dominate a bunch of winter series races at the Meadowlands. Still, it figured he would have his comeuppance once the top horses got going in the spring. Instead, he has kept rolling and, in his last three starts, has now beaten Father Patrick twice and Sebastian K once.

Not that Sebastian K didn’t race well. This was his first start of the year and he got beat by a nose by the hottest trotter on the planet.

“It was a tremendous first race back, especially after his problems with his ulcer,” said co-owner Tristan Sjoberg. “He put in a great effort. I thought he had it won 100 meters out. I still thought he won it (at the wire), but that last step he just turned his head. He was a little but tired and he lost it on that.”

Even Ell wondered what might have happened if this wasn’t Sebastian K’s first start of the year.

“That other horse was tremendous,” he said. “If he had had another start beforehand it might have been a different story tonight.”

This was the race in which Sebastian K trotted the fastest mile (1:49) in history last year. Last night, the winning time was 1:51.

Joe Holloway was ready to give up on Bettor Be Steppin in the Lynch. His filly was buried on the rail and would have to pass a lot of horses to get to the wire first.

“At the half, I thought we were dead,” Holloway said.

In fact, Holloway focused his attention on his other starter, Divine Caroline. But she would wind up getting a rough trip while Corey Callahan was able to get Bettor Be Steppin out of a jackpot, wheel to the outside and gun down the leaders to win by a nose over Single Me.

“I knew we had to get a little lucky tonight and she did,” Holloway said. “I thought she’d have to get a trip to win and she did.”

Stacia Hanover, the even-money favorite, finished seventh after leading much of the way through fast fractions of 26, 54.1 and 1:21.4.

A “Lucky” Win in the Ben Franklin:

Trainer Chris Oakes admitted that his confidence took a hit when Luck Be Withyou drew post nine for the $500,000 Ben Franklin. A week earlier, Luck Be Withyou scored a gate-to-wire win in the Franklin elims from post eight, but Oakes knew the task would be all that much tougher last night in the final.

“I was sitting back all week hoping we drew good,” Oakes said. “If we would have drawn good I would have been real confident. When I saw the nine I thought this isn’t going to be easy. There were great horses in here. But we got it done.”

Driven by George Napolitano Jr., the son of Western Ideal rocketed off the gate to take control of the race. He led by 1 1/4 lengths after a half in 55. Driven by Simon Allard, Domethatagain was second and would not go away. In the stretch it came down to Luck Be Withyou and Domethatagain and the two engaged in a take-no-prisoners fight to the wire, with Luck Be Withyou prevailing by a nose.

“There was a lot of stress after we drew the nine hole,” Oakes said. “I knew we had a really good horse and I knew going in he was at his best, but I thought it was horrible getting the nine hole. I want to win every race and I was 0 for 3 on the night going into this race. At the end of day this was the biggest race and we got it done and that’s what we do here.”

It was a race for 3-year-old male trotters, so of course Jimmy Takter had a say in the outcome. The Takter stable finished one-two in last night’s Beal Memorial as Pinkman just held off a game Uncle Lasse. Pinkman won by a head in 1:51.3.

Pinkman suffered his first defeat of the year last week when second behind Wicker Hanover in the Beal elims, but Takter said the gelding had an excuse as he was sick.

“I was a little concerned because his blood was not as good as we hoped,” Takter said. “Last week he was quite a bit anemic.”

Pinkman’s game is speed and last night he blasted off the blocks from the one post. Fortunately for the Takter gelding no one took much of a crack at him. He got to the quarter in 27.1 and the half in 56.2. Centurion ATM took a run at him, but he was able to put away that challenge. The real threat was Uncle Lasse, who was sitting chilly along the inside for Brett Miller. Uncle Lasse gave it a good fight in the stretch but Pinkman prevailed.

“I definitely can’t complain with the trip and the fractions,” winning driver Yannick Gingras said. “Everything went his way. He has that intimidating speed. He can leave the gate so fast. Last week leaving the gate I knew he wasn’t quite right because he didn’t leave the gate like he can. Usually the first couple steps out of the gate he just snaps right out of there. Today he was back to himself and I don’t think he was 100 percent. I’d say last week he was 50-60 percent and probably 90 percent today. I think Jimmy can have him even better than this.”

It was a big showing from the Takter stable, which has experienced a few bumps in the road on the path to the Hambletonian. But after the Beal, Takter has every right to feel good about his chances in the sport’s marquee trotting event.

“They both raced very good tonight,” he said. “Lasse is a stallion, so maybe it’s more important that he does well. He is out of Solveig, so his pedigree is incredible. I can’t take anything away from him after how well he raced tonight. We have been battling a little sickness in the barn the last three weeks and that has hurt some of our horses. It was nothing too serious but enough that it has taken a little toll on them. I feel very good about our (Hambletonian) horses. They are a bunch of good horses. I am flattered to have all these guys. These two tonight, they are very good horses.”