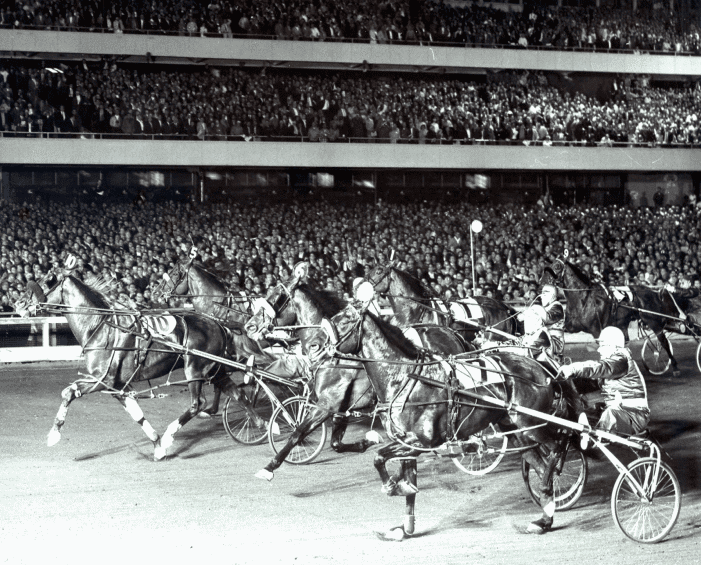 $144 Winners Don’t Come along Every Night

In the spring of 1962, some buddies and I were young wise guy regulars at Roosevelt and Yonkers in New York. That’s what so many New Yorkers, young and old, did in those days. You lived and breathed the racing game and tried to get to the track every chance you had.

My friend the Greek always watched horses during their warm-up miles before he’d place a bet. The drivers always took their horses a trip around 2:25 about three races before they were programmed. The Greek would study how they came off the last turn at Roosevelt to see which horses had the smoothest gait.

On the night of the Messsenger Stakes, Roosevelt was packed. With a purse of $169,431 it was the richest race in harness history and drew not only a big crowd but also a big field of 10 pacers. Most of the bettors put their money on Adora’s Dream or maybe Coffee Break, Ranger Knight, or Lehigh Hanover, The Greek went another way.

“This Thor Hanover is really a good horse,” he said. “He’s been part of an entry, but tonight he’s not coupled. He starts from the second tier, but I think he can win.”

My buddies and I were not convinced. Thor’s driver John Simpson was capable of driving on the mile Grand Circuit track, but in the Messenger he’d be facing the best drivers in the game who were regulars at Roosevelt.

Still, the Greek persisted. We relented. The four of us kicked in 50 cents each and the Greek bet Thor Hanover and waited to watch the race.

It was a competitive race from the start, but Thor Hanover wasn’t part of it. Then in the final strides he knifes through to win. We were stunned. We were even more stunned when we saw that he paid $144.00 to win.

My trips to the track didn’t always work out that well. I lost money more often than I won it. But I loved the atmosphere and the characters you encountered at the track. They were enough to make you forget the stale popcorn and bad coffee.

In the early days, I was just a boy from “da Bronx.” Bronx and Brooklyn boys have a genetic defect: when any one in authority (parent , teacher, policeman etc) says, “You’re not allowed to do that” our brains hear “How can we do it.”

So when parents said that the track was off limits, that was just a challenge to me and my buddies.
At age13, I got my newspaper delivery route. I netted $12-15 a week, quite a jump from a $2 allowance+food costs if I went to movies or ball game. Bowling was expensive, so my buddies and I hopped on the Woodlawn subway line for 15 cents, then took the Express bus to Yonkers. We ponied up $2.10 admission, maybe 25 cent for our bible—the Doc Robbins program. Yonkers had a big open bleacher area by the top of the stretch, That’s where we hung out.

In those days, there were separate windows for $2 win/place/show bets and $5, $10, $20 and $50 betting windows, The cashiers were in different locations. Our youthful stake was limited in dollars, but we had confidence, ignorance, and stupidity in abundance.

The only big payoff wager was the daily double. My buddies used to stand in awe of bettors who went to the big money windows. So we’d talk to guys who were well dressed (we certainly were not) or overweight because we figured these guys had to win a lot to eat so much or wear nice clothes.

Our hit or miss accounting pivoted on the night’s seventh race— the last race we could see before playing Cinderella to get home with school the next day. If we did well during the night, we had moxy that we ”knew ” the game. If we hit that seventh race, it was an emotional high. It was our last chance to win big or recoup losses. One night , we scraped all funds available and jumped in.

Well, you know how these stories often end. You don’t hit a $144 winner like Thor Hanover every night. That night we didn’t have moxy, and we didn’t have money. I know that because I remember walking a mile to the train station because I couldn’t pay the fare for the express bus.