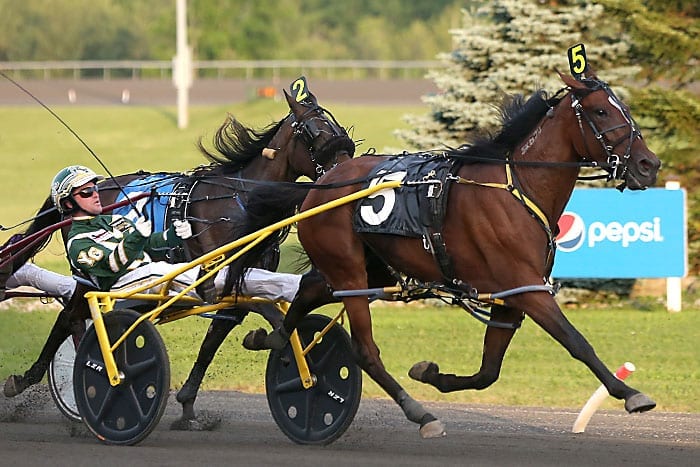 CAMPBELLVILLE, ON – Thirteen proved to be an unlucky number for JK She’salady, last year’s Horse of the Year in the U.S. and Canada, who suffered the first defeat of her career Saturday night at Mohawk Racetrack in her $35,000 elimination for the final of the Fan Hanover Stakes next Saturday for three-year-old filly pacers.

Driven by Tim Tetrick, JK She’slady made a move from midpack going around the final turn and was second in the stretch, but failed to kick into another gear, finishing fourth, 2¾ lengths back of Sassa Hanover, who went postward at slightly less than 7-1. JK She’salady went postward at 3-20.

It was JK She’salady’s first loss in 13 career starts. She is trained by Nancy Johnansson for the 3 Brothers Stable – Alan, Ronnie and Steve Katz of New York – who bred the daughter of Art Major. This was only her second start of the season and first since winning s New York Sire Stakes race at Tioga on May 25.

“She got beat, they all get beat, at least it’s not next week in the final,” Tetrick told Harness Racing Update. “I thought maybe I could be second over…and the horse I was following got to clear on the horse I thought was the one to beat (Bettor Be Steppin) and she didn’t race well and it left me out high and dry from the five-eighths on. It was just a pretty good mile.

“You gotta realize she’s had one start all year. These other mares have had a couple races. Training and qualifying is not like racing where they can be raced tight and ready to go.”

“She should be better for the final,” he added. “No horse is going to go undefeated. We never thought she’d go through her whole career undefeated. We were thrilled it lasted this long. Thirteen wins in a row, you don’t see too many horses doing that. And you what to know something? You’ve got to get lucky. When you’ve got a three-year-old it’s different than two. They’re tougher horses. There’s a lot of racing left, so we’re not down on her or anything like that. We’re looking forward to next week.

“She raced good. It was only her second start of the season. Some of these other mares have had four or five starts. The race came up kind of early on us. We only qualified her two times and had one start in Tioga. We didn’t lose any confidence in her.

“We’re definitely looking forward to the final. We hope she does well. She’ll go back home and be back next Thursday or Friday and hopefully everything works out. If you pick a week to lose, this is definitely the week to pick.”

In the second elimination, Moonlit Dance, driven by James Macdonald for trainer Tony O’Sullivan, won by a neck, after a furious charge from seventh at the top of the stretch. Doctor Terror placed second, followed by Better Said, 8-5 favorite Solar Sister and Storm Point.

Moonlit Dance, by Art Major, covered the mile in a lifetime best 1:50 4/5. She is owned by breeder David Goodrow of Cambridge, Ontario.

The top five finishers in each elimination qualify for the final.