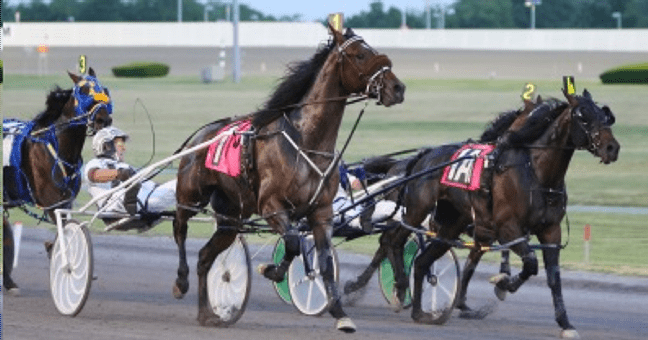 YONKERS, NY – In The Arsenal and Betting Exchange went postward as a coupled entry in the $300,000 Art Rooney Final for three-year-old colt pacers Saturday night at Yonkers Raceway, but what happened in the race will likely be remembered for how it ended. Bizarre. Strange. Odd. Perplexing. Any one of those would sum it up.

Both had the lead at various points, and were actually in an interesting battle in the stretch. It looked as though In The Arsenal, driven by Brian Sears, would win easily, but he started to bear out and took some funny steps. But he was able to hold off Betting Exchange, driven by David Miller, to win by a head.

“With every experience, I look for this colt to get better and better,” said Sears. “He was a little green there at the wire, kind of made a little bit of a right hand turn. Fortunately no one was outside him. He’s done everything we’ve asked so far. There’s times in the miles with this colt that he latches on to you and wants to pace, and when they were pacing past the quarter I was thinking about trying to get Dave, but then they took a shot at me pretty good and I couldn’t open the hole. But I was able to make my move to the front. He felt good right through the turn, the only moment was right at the end where he kind of ran out and I really can’t explain it but he’s done some funny things in races before. Hopefully, with experience he’ll get better and more mature.”

For In The Arsenal’s trainer Kelvin Harrison, it was a glorious win, albeit someone nervewracking.

“I really can’t say what happened,” Harrison said. “Brian didn’t seem to be too concerned about it. I was worried (in the stretch drive), but Brian said the horse was well within himself. I was watching the race on the TV in the paddock and probably had the worst view. After the race, my horse cooled out good. He seemed very, very sharp after the race.

Howard Taylor owns 10 percent of In The Arsenal with breeder White Birch Farm, and 50 percent of Betting Exchange.

In The Arsenal, a son of American Ideal out of the On The Road Again mare Ladyotra, collected $150,000 to raise his lifetime bankroll to more than $580,000.

In The Arsenal went into the race undefeated in two starts this season, including winning his elimination race for the final. He had post position two, which gave him an easier pathway to the front. Betting Exchange, starting from post five in the field of eight, had a more difficult task. Betting Exchange led by a nose after the opening quarter mile while parked, followed by Rock N’ Roll World, while In The Arsenal was a close third. Sears made his move and led through a half in 56 and three quarters in 1:24. He had a one-length lead at the top of the stretch.

Harrison said he will skip the Somebeachsomewhere Stakes this Saturday at Mohawk Racetrack and go directly into the June 13 elimination races for the $1 million North America Cup on June 20.
“I just want to give him the best chance we can give him,” Harrison said. “With the week off he’ll be even better. In a perfect world we’ll go right into the North America Cup, skip the Hempt and go right to the Meadowlands Pace.”

Purffect Bags Is Perfect In Lismore

Purrfect Bags made her season debut a winning one after three qualifiers to win the $117,724 Lismore Pace for three year-old fillies by two lengths.

Driven by Victor Kirby, Purrfect Bags was fifth by 3½ lengths at the top of the stretch, but finished strongly on the outside with a final quarter in 27 2/5 to win in 1:52 3/5, beating 2-5 favorite Sassa Hanover. Purrfect Bags went postward at more than 11-1 odds.

Purrfect Bags is trained by Jim King and owned by his wife, Joann Looney-King, who also trained Tyra, winner of last year’s Lismore.

“Last year I won as a trainer and this year as an owner,” she said. “Winning as an owner is much more profitable. I paid $2,000 for the filly (by Roddy’s Bags Again) and brought her home and my husband was less than thrilled, but she’s been a nice filly all along.”