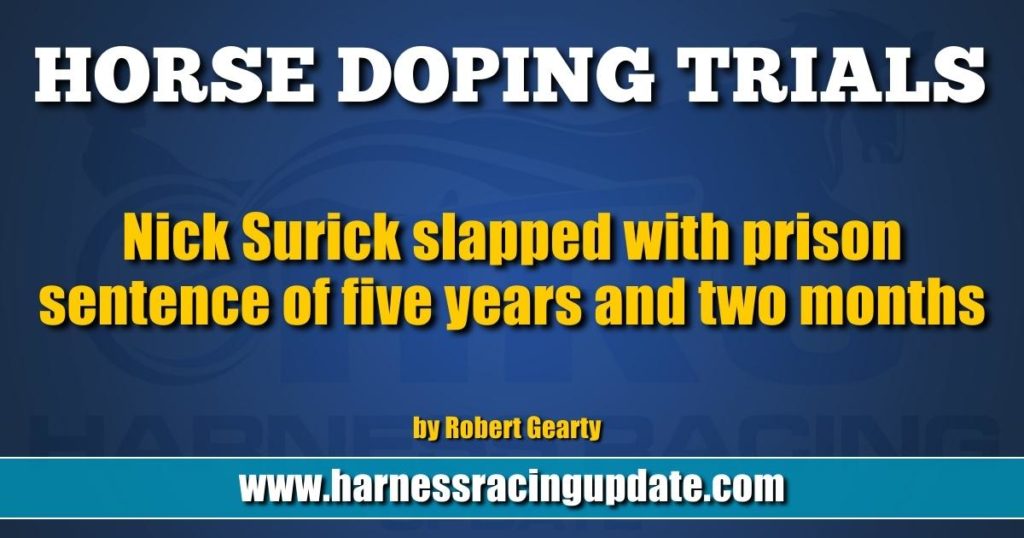 Even though the disgraced trainer ratted out others in the racing industry, federal prosecutors declined to provide him with a so-called 5K1 letter recommending leniency. The Government concluded he had not provided substantial assistance.

Prominent harness racing trainer and thoroughbred owner Nick Surick was sentenced Thursday (Jan. 19) to five years and two months in prison for his involvement in what the Justice Department says is the biggest horse-doping investigation in its history.

The sentencing took place in U.S. District Court in New York, where prison sentences have been meted out to 18 other defendants in the case. Prosecutors have charged 31 individuals since March 2020.

Surick, 34, of Jackson, NJ, wore a suit and tie to court and showed no reaction as the punishment was handed down by Judge Mary Kay Vyskocil. It was one of the harshest sentences to come out of the FBI probe. Probation officials recommended a sentence of six years.

Surick agreed to plead guilty to three felonies as part of a cooperation deal with prosecutors. He began cooperating shortly after his arrest nearly three years ago with most of the other defendants. He told Vyskocil it was tough to provide incriminating information about close friends and business associates but said it was the right thing to do.

He said he was sorry for the crimes he committed. “I hurt the sport I love,” he said.

He apologized to “hardworking” trainers, “the horses themselves,” and regulators.

“I owe an apology to the public,” he added. “They were gambling on a product that was not true.”

Surick added, “I was caught up in this crazy competition to be the best. I lost my way.”

Even though Surick ratted out others in the racing industry, federal prosecutors declined to provide him with a so-called 5K1 letter recommending leniency.

“The Government has concluded that the defendant has not provided substantial assistance in any investigation or prosecution,” prosecutor Sarah Mortazavi wrote in court papers last week ahead of the sentencing.

“This decision was precipitated by the defendant’s inaccurate recounting of a pivotal event involving the doping of a particular horse, Northern Virgin, which was included in a superseding charging instrument on the basis of Surick’s description,” she said.

Mortazavi said Surick told prosecutors that co-defendant Rebecca Linke, a veterinarian, had personally injected Northern Virgin with the banned substance Epogen in December 2018 when in fact Surick had injected the horse himself. Linke received a deferred prosecution agreement from the prosecution.

In court, Mortazavi said that Surick’s incorrect version of what happened so compromised his credibility that prosecutors were unable to use the information he provided to charge anyone else.

Still, she said prosecutors did not believe Surick lied and that it did not warrant ripping up the cooperation agreement. She said Surick still deserved credit for attempting to cooperate at an early point in the case.

In court Surick said to Vyskocil that he had no reason to lie. He blamed a faulty memory for what happened.

“It’s an honest mistake that destroyed the 5K,” he said.

Surick choked up as he asked the judge to sentence him to home confinement.

“I just want to keep going straight,” he said. “I am hoping and praying you give me the chance.”

“This case is somewhat unique, and for the court a difficult case,” Vyskocil said. But she said it was necessary to sentence Surick to prison for his crimes.

“By plying horses with PEDs you endangered horses, other horses, jockeys, and drivers,” Vysckocil said. She said he cheated regulators and the betting public.

“You impugned the integrity of the sport,” the judge told Surick.

She said Surick was different from other defendants because he had been charged with obstruction for impeding New Jersey Racing Commission investigators from testing Northern Virgin after he had been doped with Epogen.

Surick and prosecutors memorialized the cooperation agreement in October 2020 when Surick appeared before Vyskocil and pleaded guilty to two counts of conspiracy to misbrand and adulterate drugs and one count of obstruction. The maximum penalty for those three charges is 30 years in prison.

One of the conspiracy counts related to the doping of horses trained by Jorge Navarro, who is serving a five-year sentence in the case.

The other conspiracy count related to Surick’s doping of his own horses.

Surick was the one prosecutors say was captured on a wiretap claiming to have made horses that Navarro “killed…disappear.”

“You know how many f—— horses he (Navarro) f—— killed and broke down that I made disappear,” Surick was quoted as saying to co-defendant trainer Michael Tannuzzo in February 2019. “… You know how much trouble he could get in…if they found out …The six horses that we killed.”

Mortazavi wrote that during the proffer sessions with prosecutors, Surick minimized his conversation with Tannuzzo.

Surick attorney Timothy Donohue of West Orange, NJ, said about the conversation that it concerned how “broken-down horses” were disposed of by selling them to purchasers in Pennsylvania.

In 2017 Surick trained the 1,000th winner of his career at Freehold Raceway, according to reports. Two years later, he won 367 races in 2019, ranking second in wins among North American harness trainers.

As a thoroughbred owner, from 2014 to 2019, Surick raced horses in 25 races at Gulfstream Park and Monmouth Park. He won seven of those races. He sent most of the horses he owned to Navarro and Tannuzzo.

Prosecutors say the defendants avoided detection by racing regulators because the PEDs they used were not detectable in post-race testing.

Prosecutors had accused Servis of doping virtually all the horses in his stable, including champion Maximum Security, who was disqualified from first in the 2019 Kentucky Derby (Grade 1) for interference. Servis is scheduled to be sentenced May 18 and faces four years in prison.