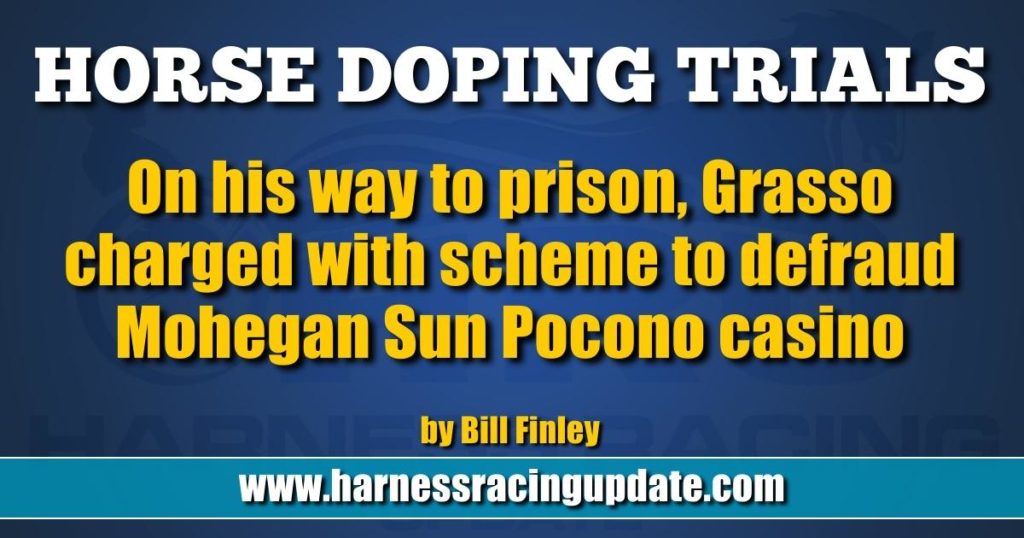 On his way to prison, Grasso charged with scheme to defraud Mohegan Sun Pocono casino

Disgraced vet has gone from pleading guilty for his role in the horse doping scandal to, allegedly, scamming a casino.

Just 18 days before he was set to begin a 50-month prison sentence for selling performance-enhancing drugs, Grasso was arraigned in a Pennsylvania court on Jan. 6 after authorities charged that he conspired with a casino employee in a scheme that netted Grasso $21,646.

According to a story in the Times Leader, Grasso, 66, and electronic craps dealer Jason Kutney worked together to rig an electronic craps game. Kutney was responsible for pushing a button at the end of a 30-second clock allowing patrons to place bets. But Kutney allegedly pushed the button early which allowed Grasso to see the outcome of the roll of the electronic dice before placing his bets.

According to court records, Grasso won $17,521 on Dec. 30 at the machine manned by Kutney and another $4,125 on Jan. 5. Security officials at the casino launched an investigation after realizing that players at Kutney’s table were showing an unusually high win rate. According to the Times Leader, Kutney admitted to pushing the button on the machine earlier than when he should have.

According to the website casino.org, surveillance video showed Kutney hitting the button early nine times. That, the website reported, gave patrons as much as 20 seconds to place their bets even though the dice had already been rolled and the winning numbers had already been displayed.

According to casino.org, Kutney was charged with three felony charges for receiving stolen property, theft by unlawful taking, and conspiring to trick, fraud, or manipulate a casino. Kutney has also been hit with a first-degree misdemeanor for knowingly tricking and/or defrauding a business. The website did not report what charges were being brought against Grasso, but it is believed that they are similar to the charges pending against Kutney.

Grasso is due to appear in Luzerne County Court next on Jan. 17 for a preliminary hearing on the casino charges.

In November, Grasso, a veterinarian who worked in the harness racing industry and was one of more than two dozen individuals indicted in 2020 for their role in a horse doping ring, was sentenced after pleading guilty to one count of drug adulteration and misbranding conspiracy, a felony. The prosecution had maintained that Grasso’s doping led to corrupt trainers collecting over $47 million in ill-gotten purse winnings.

In May, when Grasso entered a guilty plea, the U.S. Attorney’s Office for the Southern District Court issued a press release in which U.S. Attorney Damian Williams commented on the Grasso plea as well as the guilty plea entered by harness trainer Richard Banca. Banca was sentenced to 30 months.

“Grasso and Banca represent the corruption and greed of those in the racehorse industry looking to win at any cost,” Williams said. “In peddling illegal drugs and selling prescriptions to corrupt trainers, Louis Grasso abdicated his responsibilities as a medical professional to ensure the safety and health of the racehorses he ‘treated.’ By injecting horses with unnecessary and, at times, unknown drugs, Grasso risked the lives and welfare of the animals under his care, all in service of helping corrupt racehorse trainers like Banca line their pockets through fraud. These latest convictions demonstrate the commitment of this Office and of our partners at the FBI to hold accountable individuals seeking to profit from animal abuse and deceit.”

Prior to his sentencing, Grasso wrote a letter to the judge asking for leniency because of health issues and his modest financial means.

“I am a physical wreck,” Grasso wrote. “I am not a rich man. I don’t have much in the way of money or possessions. I have no savings, I have little cash available… While I don’t live hand to mouth, I don’t have the ability to withstand any catastrophic events in my life.”