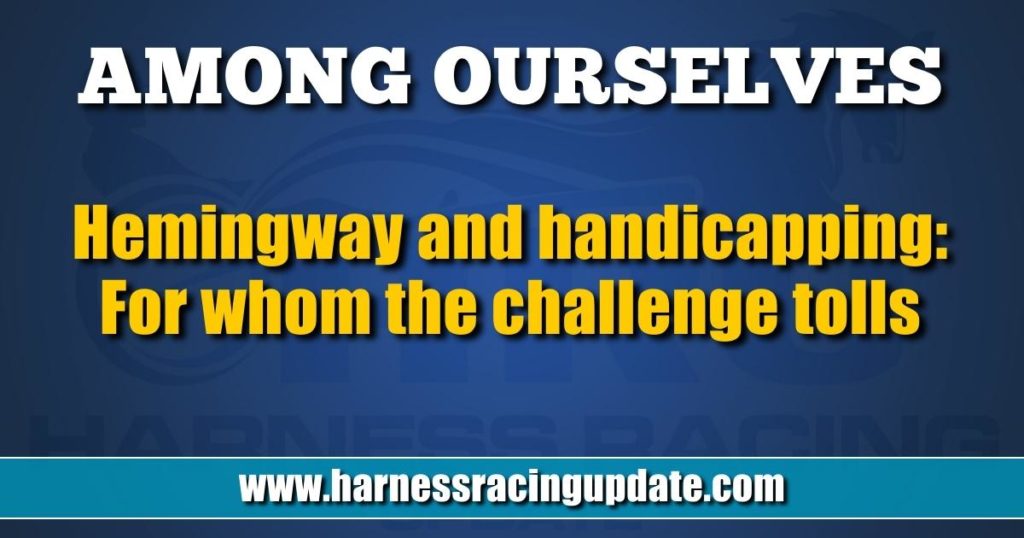 Hemingway and handicapping: For whom the challenge tolls

(Editor’s note: Long-time horse racing handicapper and columnist Frank Cotolo has opted to start a new iteration of his previous HRU column Alternative Actions for 2023. He’s now calling his column Among Ourselves, one of many translations of the French term ‘Pari-Mutuel.’ Cotolo promises to incorporate harness (and t-bred) thoughts and memoirs on betting and journalism, personalities, friends, bettors (big and small) and so much more.)

Ask any horseracing handicapper, professional or amateur, whether Ernest Hemingway had anything to do with betting on the races and odds are long the person answers correctly.

The revered author was a student horse race handicapper during his early years living in France. He wrote about it years later. Not much about it, but just enough to get my attention.

In his memoir, A Moveable Feast, Hemingway wrote he found horse racing “beautiful.” But, “It was not really racing either. It was gambling on horses,” and, “To make it profitable was more than a full-time job and I had no time for that… It is complex and difficult to keep track of it all.”

He called attention to “the racing paper,” which presented facts and figures for handicappers. He called it “the best fiction ever written.”

How much information Hemingway thought was enough to make betting the ponies worthy of his time is disputable. But his comment affected me greatly in the early 1980’s as I applied it to my own handicapping methods. What became evident to me was not the importance of accuracy in the information available; it was how accurately could I measure each element’s importance per race. That was and is where the fiction is created and passed on from each lost generation to the next lost generations, per se.

I reached out to fellow handicappers. I asked each one how they calculated basic handicapping elements like speed, class rises and drops, surfaces, post positions, etcetera.

At dinner one night, interviewing Andy Beyer in Los Angeles for Gambling Times magazine, he swore his speed figures weighed the heaviest of all other elements when he made his wagering decisions. Though, he also said the figures were miserable guides during his West Coast betting campaign as opposed to their success at eastern tracks.

Professor Alexander [Delaney] of UCLA told me making such calculations as Beyer was doing could not possibly be accurate due to a fundamental mathematical relationship called “the uncertainty principle.” Delaney said it had to do with the quantum world of particles, a phrase never appearing in a Dick Francis novel.

Most of the nighttime punters I asked while strolling the apron at Hollywood Park Western Harness Racing were certain about how they measured handicapping elements.

“It’s the driver, always, that wins a race” said one.

“The quarter times,” said another, “because in harness racing it’s not like the runners. They go as fast as they can always. Harness horses are rated in each quarter.”

“Post positions,” said another. “A horse travels more ground the farther out he starts.”

And then there was Al Lewis, the actor known for his roles in the TV sitcoms The Munsters and Car 54, Where Are You? He looked at me and said, “I don’t measure nothing.”

I have my own theory about Hemingway’s retreat from horse racing, one that fits the lifestyle he chose and everything we know that is true about him.

He admitted to having an uneasy relationship with horse racing as a handicapper and bettor. Unlike his calling to write, he could not exercise control as a handicapper. This made him feel weak; and that was not a comfortable pose for him. Horse racing of any kind was too mild and meek a sport for Hemingway. He was a man placing great importance upon brawn over brain.

Over the years, which included being a hospital driver on battlefields of World War I, he developed an old-fashioned machismo. Male superiority. A state of mind thriving on sports displaying sexual prowess, definitive results for the high and mighty, so to speak, those fueled by negative cognitions and emotions.

He was drawn to sports that physically demand male strength and often include violence. He wrote about boxing, bull fighting, deep-sea fishing and hunting wild animals. He participated in a few of those sports, though to what degree we may never be able to prove. Perhaps he did so mildly, almost passively, merely to collect subject matter for the profession he was sure he commanded, writing. And then, writing more fiction than non-fiction, that is, thriving in more passive than active endeavors.

The specific lessons I learned from the Hemingway example allow me a strong tolerance for the lack of particular knowledge others feel I need to trust making comfortable wagers on horse races. I avoid strict handicappers praising their skills when correct and creating fictional excuses for failure. Handicapping is about making decisions using unreliable sources.