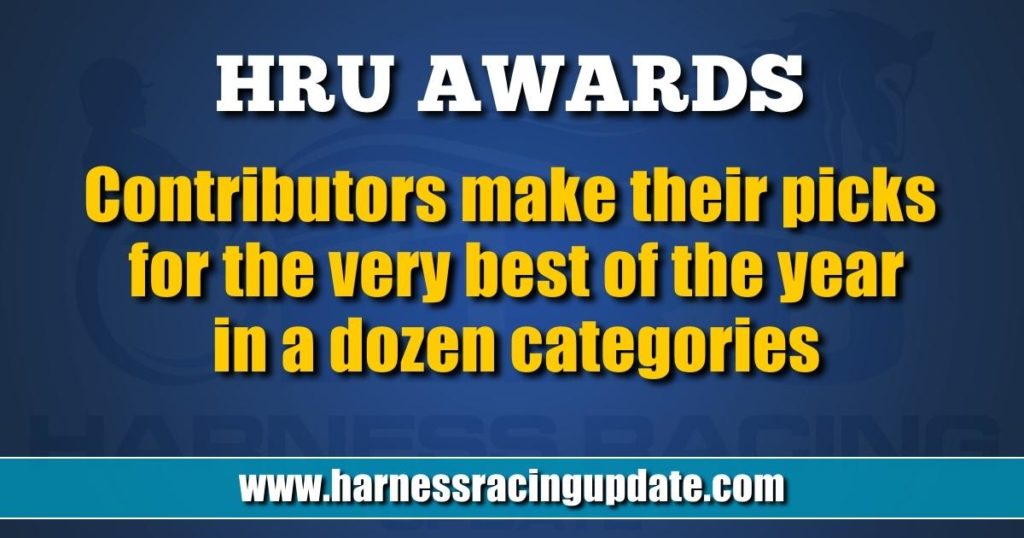 In the second annual edition of The HRU Awards, our contributors make their picks for the very best of the year in a dozen categories.

Harness Racing Update is proud to present the second edition of The HRU Awards.

We asked our contributors to give their picks for the best of 2022 in 12 categories.

Keep in mind, we purposely left the interpretation for each category up to the contributors. Some chose to think nationally or globally, some chose to think more regionally, focusing on the area they cover or to which they are most familiar. Contributors that felt they could not provide an educated opinion for a question left it blank.

1. HORSE OF THE YEAR

Brett Sturman: Bulldog Hanover. If there’s any justice he’ll be the first unanimous Horse of Year. Accomplished the best single-season ever.

Bob Heyden: Bulldog Hanover. This absolutely has to be the first ever unanimous winner. Mr. Mueller who tossed a wrench into the works voting for 2-year-old champ French Chef in 1980 at 270-1 against Niatross had limited backlash to deal with in a pre-Internet age. That simply won’t fly in 2022.

Victoria Howard: Bulldog Hanover. In the 40 years I’ve been in the sport I have never watched a more powerful athlete than Bulldog. His presence alone speaks for himself.

2. PERSON THAT MADE THE BIGGEST CONTRIBUTION TO HARNESS RACING IN 2022

Dean Towers: Jack Darling. Although Bulldog Hanover was a fantastic racehorse in Ontario, he was a relative unknown. Jack mapped out his coming out party in 2022, and handled the pressure associated with it brilliantly.

Brett Sturman: Dave Brower. His untimely passing and the void he leaves illustrates just how much of a contribution he was to the sport. A terrific ambassador to the sport, his handicapping style and broadcast excellence made the sport that much better.

Bob Heyden: Jack Darling. He was into sharing / showcasing / and answering his mail. Not every request, but he did what he could. His management of Bulldog in 2022 was second to none.

Trey Nosrac: Adam Bowden, this dude is always trying something new. In 2022, he stood the first pacing stallion in Kentucky, did a cool program called Crossover Racing, has an interesting video series titled Creekside Chat with his sidekick Shawn and his farm is doing some foreign horse breeding. Adam is like the guy in the bar who says, “hold my beer.” I love that guy.

Melissa Keith: Jack Darling’s sportsmanship in bringing back Bulldog Hanover resulted in history being made. Being voted into the Canadian Horse Racing Hall of Fame and winning his second Dan Patch Good Guy Award underscore that 2022 was a very good year for Darling.

3. TRAINER OF THE YEAR

Dean Towers: Sometimes I wonder if this is a volume or lifetime training award, but this year, certainly on the latter category, Jim Campbell fits the bill. His big horses were super once again, and that’s no accident.

Bob Heyden: Jack Darling. One horse isn’t enough, you say? It didn’t seem to matter for Ivan Sugg in 2003 with No Pan Intended or Bruce Saunders in 2010 with Rock N Roll Heaven. Jack Darling cannot win enough awards to satisfy me.

Victoria Howard: Jack Darling has always been a top trainer, but keeping his horse Bulldog Hanover in top shape week after week like he did was by far his greatest achievement surpassed by none.

Melissa Keith: John Bax announced his semi-retirement last week, not long after winning his first Johnston Cup as top Ontario Sires Stakes trainer, and the passing of his 31-year-old champion Goodtimes. It’s impressive that he had his highest UTRS (.307) and earnings ($1,936,494 Can.) in his last regular season, led by OSS 2-year-old filly trotting champion Righteous Resolve.

4. DRIVER OF THE YEAR

Dean Towers: Dexter Dunn continues to be the most sought after driver in the sport, and that tells us something.

Brett Sturman: Dexter Dunn. A sensation that continues to impress, taking his fourth consecutive formal award as driver of year. Honorable mention to Tim Tetrick for cobbling together a season with 1,000 more drives than Dunn, 250 more wins, only to fall less than a million short of his rival in earnings.

Bob Heyden: Dexter Dunn. An ascension unlike one I’ve seen. He is about to be the first driver in half a century to be first or second in the HOY balloting four straight years. A boatload of division titles. A patience and sense of the horse and the race almost beyond comprehension.

Thomas Hedlund: Dexter Dunn. Everything he does in the bike seems to be so easy and I really like his style and touch.

Trey Nosrac: Trevor Smith, one of the large flock of drivers in Ohio with the surname of Smith. My recommendation is based on the incredible feat of Trevor catch driving a racehorse of my ownership in my only winning race since 2018.

Melissa Keith: James MacDonald (UDRS .338) is the only Canadian-based driver to make the top 10 by wins in North America this year. His eight-win night on Dec. 5 at Woodbine Mohawk Park; reaching his 3,000th career victory Oct. 22; his third consecutive Ontario Sires Stakes Lampman Cup… Not bad for the MacDonald brother who told me he “didn’t have as much interest in it as Mark and Anthony” in a 2014 interview.

Thomas Hedlund: All the hard-fighting owners that don’t always end up in the winner’s circles after big stakes wins.

Dean Towers: Ray Cotolo loves harness racing and it shows. He has a good cheer about him, witnessed in his race calls this year at Rosecroft, and he deserves more and more chances to shine.

Brett Sturman: Jordan Ross. The 25-year-old has earned more in purses this year (over $1.2 million), than his entire career combined prior to this year. A name to watch in the Midwest.

Bob Heyden: Lucas Wallin was 30 as of Dec. 28 and came through big time in his final year eligible. Jordan Ross gets a nod for honorable mention and is odds-on in 2023.

Thomas Hedlund: Too many in my mind. I have to mention Swedish trainer Daniel Wäjersten, who improves his trainer’s results dramatically 2022. $2,104,000 is a strong result for a young trainer in Nordic countries in Europe,

Bob Heyden: Walner with dad Chapter Seven an eyelash back. Twenty-six of 40 freshman and sophomores in the 2022 Breeders Crown were Walners (15) or Chapter Sevens (11). None of the nine filly yearlings by Walner sold for less than $110,000 at Harrisburg.

Thomas Hedlund: Maharajah dominates in many European markets and his quantity of offspring racing is impressive.

Dean Towers: The Dayton Derby was one of my favorites in recent memory. Bulldog Hanover was up against it, and the field made him work hard, yet he destroyed them with a move home that simply said, “I’m way better than you.”

Brett Sturman: William Haughton Memorial. 1:45.4 mile by Bulldog Hanover broke a barrier that few thought was possible. Most memorable race of the year.

Bob Heyden: 1:45.4 Bulldog Hanover at the Meadowlands in July. It is now our version of “31 Lengths in the Belmont by Secretariat”

Thomas Hedlund: The one that comes to mind is the $300,000 Jubileumspokalen at Solvalla in August when Björn Goop’s San Moteur played with the opponents and came home in an impressive mile rate of 1:52.1 over 1.3 miles.

Dean Towers: Hambletonian Day. The races were terrific, culminating with Cool Papa Bell’s longshot win. In my view, this sport has to do everything it can to keep this day just like it is, year after year.

Brett Sturman: The harness racing community rallied around Bulldog Hanover. It created a genuine buzz throughout much of the year and helped the sport get as close as possible to mainstream coverage.

Bob Heyden: Linda Toscano’s pair of racing/siring standouts dominating the trotting game — Chapter Seven and Walner. We’ve seen first crop dominance from both before on the track and then at the sales-but never with the same trainer like this.

Thomas Hedlund: Astonishing performances worldwide. This is proof of the advancements in breeding in basically every harness racing country.

Trey Nosrac: The yearling sales. Attending my first sale in several years, I forgot how much fun they are. The tsunami of money spent at the sales was impressive. Hopefully, the lusty yearling purchases were not backed by non-fungible tokens.

Melissa Keith: Nat Day not only captured her second consecutive OLG Ontario Women’s Driving Championship Series, but did so with six consecutive winning drives in the Oct. 14 finals at The Raceway at Western Fair. Seeing it from the announcer’s booth was a bonus.

11. WHAT CONCERNS YOU THE MOST ABOUT THE FUTURE OF THE SPORT?

Dean Towers: Just like every year for me – the lack of change. We seem to stumble along, hoping for something better, and each year nothing appears to get done.

Brett Sturman: Continued lack of transparency. And unfortunately the title “Horseracing integrity/HISA” may prove to be more a euphemism, not directly related to real accountability in the sport.

Bob Heyden: General managers. Other than opening the doors and getting out of the way and letting the slots money fund the show, what exactly are they doing? T-shirt giveaways? Time-worn driving contests? Formulaic handicapping contests? Overpriced dining IF the restaurant is even open? Time to step up.

Thomas Hedlund: Young people that don’t show up at the tracks anymore. Young bettors exist, but where are the people under age 40 who are interested in horses? Big concern for the survival of the sport.

Melissa Keith: Reliance on tired tropes to market harness racing to groups who remain unresponsive in any meaningful way (e.g. opening an ADW account and using it; betting/dining at the track/OTB more than once a year; full or fractional horse ownership.) Losing customers to sports betting as established racetracks continue to shut down (RIP Pompano, Exhibition Park).

12. WHAT GIVES YOU THE GREATEST REASON FOR OPTIMISM ABOUT THE FUTURE OF THE SPORT?

Dean Towers: Despite competition, new mediums to wager, sports betting on all the major sports networks seemingly 24/7, we still have a few racetracks that draw big handles. Without this foundation, positive change can never come.

Brett Sturman: If you looked just at race purse levels and sales figures, you’d think the sport has never been in better shape. Those numbers continue to give a lease on life to the sport, but more must be done to capitalize from a wagering standpoint.

Bob Heyden: Kids 2-18 loving their time with horses. I see it. We need more, more, more. A full throttle intro to the sport. The business starts with those in this age range.

Thomas Hedlund: For now, that mankind soon understands the greatness of an analog world where contact with other people and, in this case, horses, are important factors for our future as sound human beings.

Trey Nosrac: The participants. Harness racing people may be reflectively small in number, but they are amazingly nice, and they are tougher than Truck Stop $2 steaks. They stay and play like crazed Keith Richards.

Victoria Howard: The growth of Kentucky which has greatly changed the game; and the strength of the Midwest tracks that has enhanced our sport for the better, giving us hope for better days.

Melissa Keith: The harness horseplayers and horsepeople who are literally invested for the long haul. A greater openness to women in non-traditional roles (e.g. drivers, race callers) where performance is more important than appearance. The evolution of the modern standardbred, even over my lifetime.