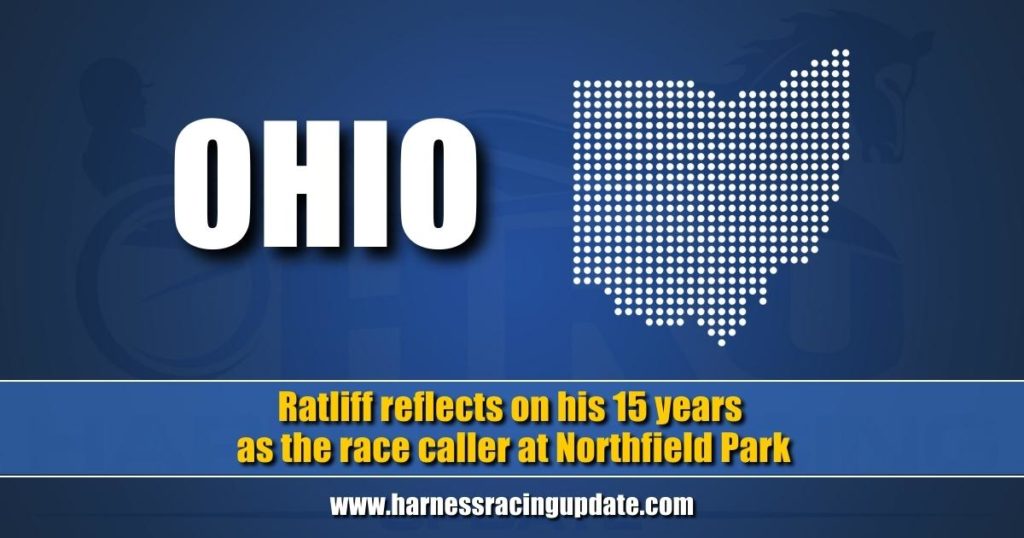 Track announcer Ayers Ratliff recently announced he is leaving MGM Northfield Park after calling tonight’s card of racing. It brings an end to his 15-year chapter at the northern Ohio facility.

Ratliff began his first full-time journey into announcing at Eldorado Scioto Downs in 2005. After leaving the Columbus, OH track to call the races at Northfield Park in 2007, he was hired as the announcer at the thoroughbred plant Thistledown in 2008. He called the races at both northeast Ohio tracks for six years. In 2014, he elected to call Northfield Park exclusively.

The affable Ratliff may be the busiest announcer in harness racing. The Marion, OH resident makes a 216-mile round trip to Northfield Park to call the races, create tip sheets, work in the race office and write and release media notices.

He is just as busy off the track. He has represented the Second Ward on the Marion City Council for more than 11 years. As a tax preparer, he filed more than 1,000 tax returns last season. He recently started substitute teaching in the Marion City School system.

Ratliff will start his new position with the Ohio State Racing Commission at the start of 2023 and his last night at MGM Northfield Park will be December 30.

Ratliff recently took some time to look back at his Northfield Park career.

Do you have a favorite race call at Northfield Park?

“I don’t know that I really have a favorite, but one that was truly unique was the 2010 Cleveland Classic (One More Laugh – 2010 Cleveland Classic – YouTube). It was snowing so hard that you literally, could not see the stretch well, let alone the backstretch. I called the vast majority of the race trying to see shadows and using my handicapped predictions of One More Laugh, who was the lead horse, holding on. I guess you would have to see it to really understand how hard it was snowing, even the camera men lost the horses around the track.”

Are there any races you would like to have back?

“Another one was at Northfield with a horse named Blueridge Pushy. My call was supposed to be, ‘and they’re all chasing Blueridge Pushy.’ However, you can probably guess how ‘Pushy’ came out. I was pretty embarrassed after that race. However, no one said a word. So, on my way home I thought that nobody must have been listening. But, the next morning Ryan Stahl, who was driving Blueridge Pushy, called me laughing saying he can’t quit watching that replay.”

I was surprised to see that you were only the third full-time announcer in Northfield Park history after Andy Cunningham and Greg Young. I knew you looked up to Greg. What are your thoughts or reflections on Greg Young?

“I grew up listening to Greg and have a tremendous respect for the job he did at Northfield for 28 years. I believe that he has the best voice of any announcer in the history of harness racing and he was a hard act to follow. It took a long time for people to start to associate my voice with Northfield races.

“When I hear some of his old calls, it is odd to me how similar my cadence is to his, and it has to be because he was the primary announcer I heard growing up. He and I have very different voices and styles, but our cadence and rhythm are pretty spot on.

“He taught me a lot about respect for other announcers, especially when you are filling-in for them. When you fill-in for someone, it is still their show and you are to do things the way they do them. It makes for smoother transitions for people who watch the product on a daily basis. Still to this day the Northfield post parades and reading of the prices are the exact way Greg did them – and I have been the announcer there for almost 16 years.”

Almost all of Northfield Park’s signature races were for pacers and you have been fortunate to call some of the great ones. If you had to put together a ‘fantasy race’ of the best eight horses you called at Northfield Park, who would you include?

“I am sure I am leaving some out, but in no particular order – Foiled Again, Wiggle It Jiggleit, Charlie May, All Bets Off, Bythemissal, Southwind Amazon, A Rocknroll Dance and Downbytheseaside.”

The county fairs have always been important to you. Do you plan to keep your fair schedule in 2023?

“Summer as usual for me. Nothing will change as far as my fair schedule and I will be excited to be back to calling the races. I have always enjoyed calling at the county fair level and love watching the babies develop into racehorses. I announce at about 17 county fairs and will be excited for July to roll around to call the Marion County Fair.”