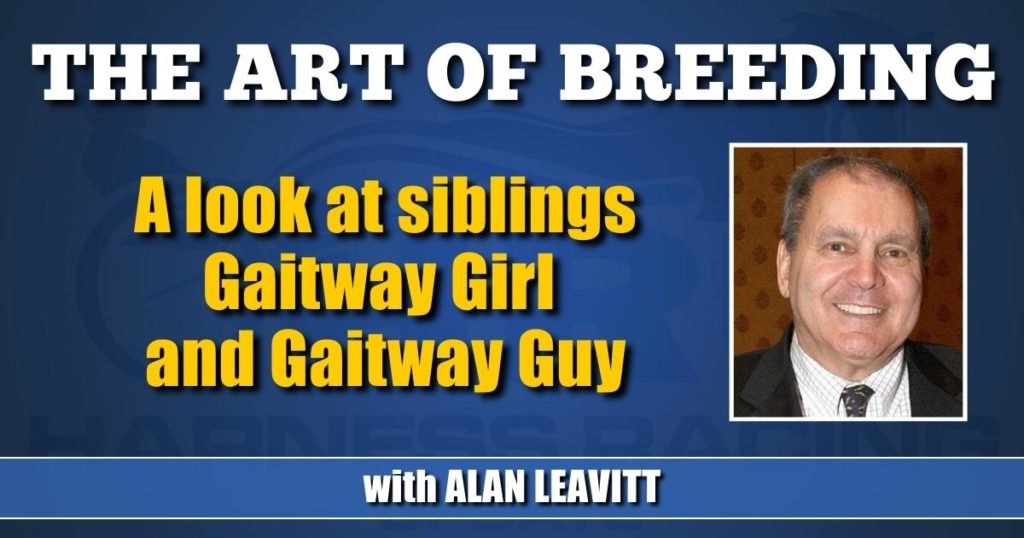 The Delaware Standardbred Breeders Fund Series for 2 and 3 year old pacers has been dominated by siblings Gaitway Girl and Gaitway Guy.

Both of them are homebreds for the GTY Stable, obviously a successful breeding and racing operation. Their success is a tribute to the value of state sponsored breeding funds.

Both of the Gaitways are by Delmarvalous, and out of Brussels Hanover, by Bettor’s Delight.

Brussels Hanover was no slouch on the racetrack, with a 3-year-old record of 1:53.3f and earnings of $326,912.
Here again, we see the significance of the first two foals of the dam. Brussels Hanover is the first foal of Barcelona Hanover and she won $326,912. Barcelona’s second foal won $133,362. None of her next seven foals won as much as $30,000, and there was only one who did that, and six of them earned next to nothing.

I know I’m shouting into the wind when I say that the odds
are top-heavy in favor of any mare’s first two foals. Sure, there are later foals who go on to win stakes races, but if you’re picking yearlings, you’ve got a much better chance of hitting a jackpot with one of the dam’s first two foals, especially the first one.

It’s also important not to confuse a mare’s phenotype with
her genotype. Phenotype means the living horse, which includes her racing performance. The Genotype is her genetic profile, and within it is her speed gene, and her ability to pass it on.

I like to think of every horse’s genetic makeup as a deck of playing cards, running from the lowest card of Two to the highest card of Ace.

When a foal is conceived, each parent contributes exactly half of the foal’s genetic makeup. In the case of a great producing broodmare, she always contributes a high speed card. If she’s mated to a stud with his own loaded speed deck, the result will be a top racehorse.

Even if such a mare is bred to a mediocre sire, you’ll still wind up with a good enough racehorse to make money at the raceways.

The point of all this is to disabuse someone, or everyone, of
the notion that a fast, stakes-winning mare will reproduce those qualities in her foals. I just read that When Dovescry has been retired to the stud and will be bred next spring. She brings back pleasant memories of watching her race, and especially of the time I spent visiting with Besim, trainer Brett Pelling’s right and left hand man, when she was laying up at the Red Mile.

But her future success, which she may well enjoy, will
depend on her Genotype, meaning how high a speed card she’s blessed with, not her Phenotype, which is her great racing career.