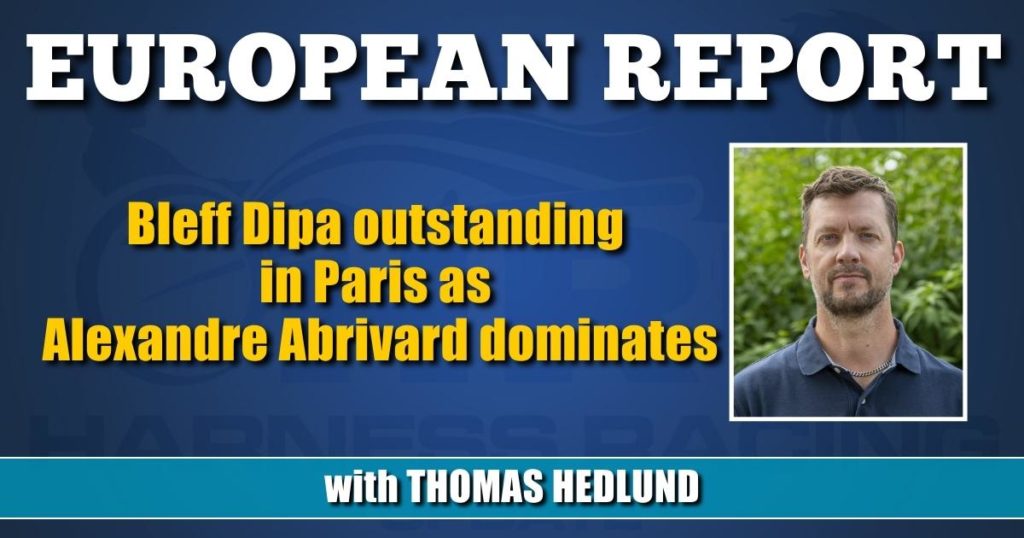 Holger Ehlert trained Bleff Dipa (Mister J.P.) dominated the $125,000 Prix Doynel de Saint-Quentin at Vincennes in Paris on Saturday’s (Dec. 3) race card and the victory was taken from the lead.

Driver Alexandre Abrivard hit the front after a quarter of a mile and Bleff Dipa was superior his opponents as he came home in a mile rate of 1:58.1 over 1.7 miles.

Five-year-old Bleff Dipa has fought in the top of the Italian ”B-crop” with a Derby win as his highest ranked victory. In Saturday’s race he bested some of the most merited French bred 5-year-olds, so the future looks bright for the Italian trotter.

The combination of an Italian-bred and Abrivard was even successful in a monté race, the $125,000 Prix Doynel de Saint-Quentin, the same day. Balsamine Font (Filipp Roc) sprinted to safe win after a third over trip and the 5-year-old mare won in strong mile rate 1:55 over 1.3 miles.

The $125,000 Prix Raoul Balliere for 3-year-olds under saddle ended the top races at Vincennes and the winner was… Abrivard, who sat on Joyner Sport (Dollar Macker), trained by Philippe Allaire.

On Sunday (Dec. 4), Vincennes played host to another race card with high staked races. It all started as the previous day ended, with a big triumph for Abrivard. This time in $125,000 monté race Prix Philippe du Rozier, where Abrivard sat on Laurent-Claude Abrivard’s 4-year-old Inshore (Real de Lou), who finished best after an inside trip and won in a mile rate of 1:54.4 over 1.3 miles.

The $158,000 Grand National du Trot, the race series that basically includes France’s all regions throughout the year, closed with the final at Vincennes and Jean-Michel Bazire picked up his seventh consecutive win in the race.

His weapon this year was Gently de Muze (Perlando), who had everything under safe control from the lead for Bazire, who is also his trainer. Bazire didn’t have to remind his 6-year-old trotter significantly on the stretch and Gently de Muze won in a mile rate of 1:58 over 1.7 miles.

The victory became safe when first choice Bengurion Jet was beaten in the last turn after a first over trip and Usain Töll held on to a 1:56 win for driver Vincenzo Piscuoglio Dell’Annunziata.

Italian Derby runner up Denzel Treb (Nuncio) has moved to Enrico Bellei’s barn after a year in Massimo Compangno’s training. Denzel Treb was undefeated in eight starts as a 2-year-old and he has had 14 starts with eight wins so far in his career.

Interantional Trot winner Zacon Gio (Ruty Grif) is another Italian top trotter that will change location. Alessandro Gocciadoro will train the 7-year-old colt who can look back at 31 wins in 67 starts and a lifetime earnings of $1,595,750. Holger Ehlert trained Zacon Gio until recently.

AMERICAN-BRED IN B-RACE IN PARIS

American trotter Beads (Archangel) tries to grab a spot in 2023 year’s edition of Prix d’Amérique as he’s in the entries list for Sunday’s (Dec. 11) $125,000 Prix du Bourbonnais at Vincennes.

Sixteen trotters are in the race and as usual, the top three will secure a number in next year’s Prix d’Amérique.

Beads has left Norway and Frode Hamre’s stable and Jean-Michel Bazire is the horse’s new trainer. The start in Prix du Bourbonnais will be Beads’ first attempt on French soil. Bazire has three horses in the race. Zarenne Fas and Hooker Berry join Beads from the same barn and Abrivard will drive the American bred trotter in Sunday’s race.