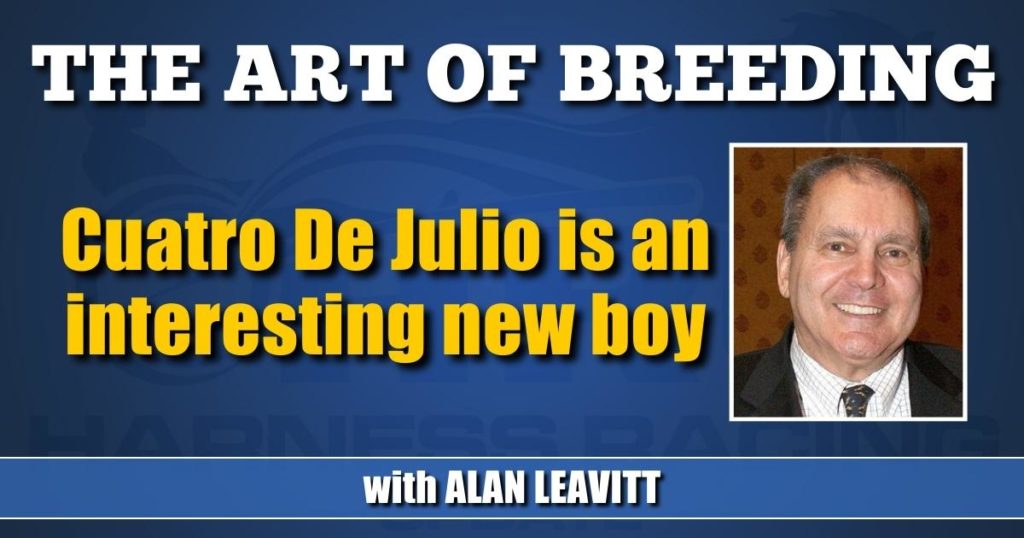 With a number of interesting trotting stallions entering the stud in ’23, I’m starting with Cuatro De Julio since he was a proud product of Kentucky.

Cuatro is sired by Trixton, and out of Clarabelle, by Ready Cash. For those of us with long memories, Clarabelle was a famous cow in someone’s advertising campaign in days of yore. He was foaled in 2018, has a record at 4 of 1:51, and earned $879,061.

He was trained by Marie Ortolan Bar, a French trainer who relocated to Kentucky. For those who share my conviction that brilliance at 2 is the best signpost of future success in the stud, Cuatro comes with great creds.

He raced 14 times at 2, starting at the Kentucky fairs where the tracks are far from ideal for a young trotter. Obviously they didn’t bother him, because he was close to invincible there. When he graduated to the Red Mile stables, he showed both his speed and his class when he won in 1:51.3 in his division of the International Stallion stakes.

With this kind of accomplishment, it is hard to understand why some smart breeder didn’t pick up on this colt then, after his 2-year-old season, but they didn’t. It’s a given that the big outfits are somewhat conservative and wait till a horse has come back and raced well at 3.

But if you’re smaller, and smarter, Cuatro is just the kind of future sire you should be looking for. Again, in the words of Augustus Caesar and Matt Damon, luck loves the bold.

Cuatro’s pedigree is well worth a closer look. On the top, he is purely American-bred, for which this kid takes a little credit. His sire, Trixton, is by Muscle Hill, a great example of a horse with a superior Genotype.

To review quickly, every horse has two aspects, the Phenotype, or living horse, and the Genotype, the genetic profile. I envision every horse’s Genotype as a deck of playing cards, running from a low card of 2 to a high card of Ace.

At the time of equine conception, each parent contributes 50 per cent of its genetic makeup, and they blend to establish the Genotype of their offspring. Envisioning each parent’s speed gene as a card in the genetic deck, Muscle Hill clearly has a genetic range that starts with a high card.

That means that even if the mare only has a speed gene range that has no high cards, Muscle Hill’s high card speed gene means the foal they produce will, at worst, be a decent trotter who can hold his or her own at the raceways.

But if the mare in the hypothetical mating contributes a higher-than-average card, the result is a stakes horse who can win at a high level. Which is why Muscle Hill sires such a high percentage of stakes winners, and always will.

Cuatro’s dam, the unfortunately bovine named Clarabelle, is by the top French sire Ready Cash. His top line, or Tail-Male side of his pedigree, is strictly French. On the bottom, however, or Tail-Mare, there’s a heavy infusion of good American blood.

Clarabelle’s second dam is sired by Defi D’Aunou, whose sire is the Hambo winner Armbro Goal, a blueblood by Speedy crown and out of the great mare Armbro Flight.

Armbro Flight was a daughter of Helicopter, who happened to be the first standardbred bought by Elgin Armstrong, of the Canadian Armstrong Bros. dynasty. Elgin had stopped at Ben White training center, in Orlando, FL. After watching all the horses training on what was then the “Winter Capitol of Harness Racing,” he introduced himself to Delvin Miller.

Before the day was done, Miller sold Elgin a promising trotting folly just turned 3 for $8,500. That was Helicopter, who won the 1953 Hambletonian and started Elgin Armstrong on his way to becoming one of the foundation pillars of our sport.

Helicopter’s daughter, Armbro Flight, lost the Hambletonian to Egyptian Candor in an epic race-off. Egyptian Candor was trained by Stanley Dancer but driven by his close friend, Del Cameron, because Dancer had the big favorite, Noble Victory, who couldn’t handle the heavy going after a day of rain before Hambletonian Day.

To which, let me say, Thank the Lord, because if Noble Victory had won the big race, I would never have gotten the chance to syndicate him a year later for a million dollars. He was the first horse to sell for a million, and he got me started as a respectable player in The Big Time.

Back to Cuatro, there’s one more notable aspect. Clarabelle, Cuatro’s dam, is out of Rebelle, whose dam is out of Island Dream, by the great Coktail Jet, one of many masterpieces created by J.P. DuBois. DuBois is unquestionably the greatest French standardbred breeder of all time, and one of the most influential in the overall history of our breed. His hand was felt in the breeding of Cuatro De Julio, and, I believe, also in his training.

So now, a prediction; Cuatro De Julio will be a success as a sire. His name in translation, is Fourth of July. When the first foals of his hit the tracks in 2026, I predict it will be Christmas in July.