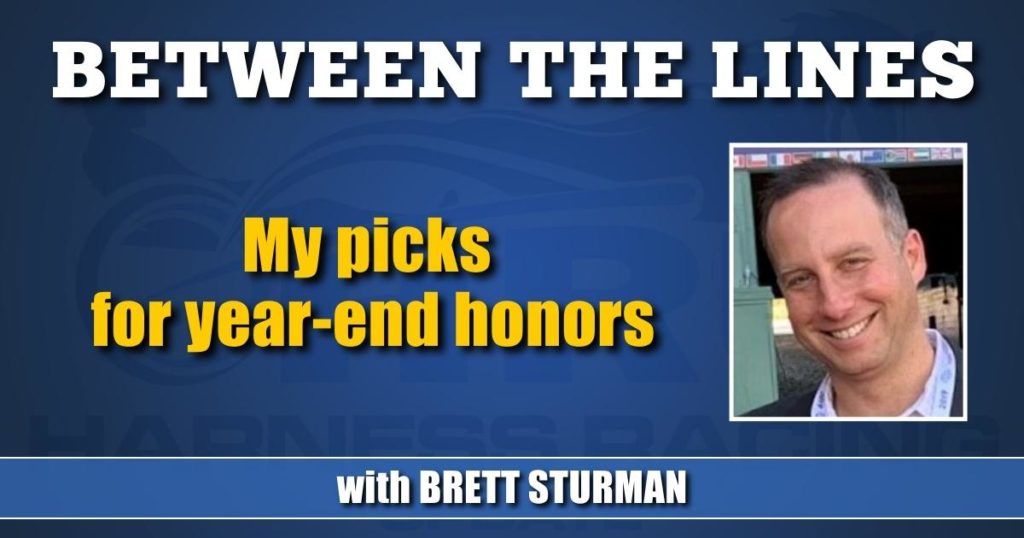 My picks for year-end honors

One of the great things about this particular column topic each year is all the differing opinions because of the highly subjective nature of determining which horses are award-worthy in their respective divisions. Though I’m most often right (naturally) in my own leanings, it’s not always clear cut and opposing viewpoints can also be valid.

In making their decisions, I’d imagine that every U.S. Harness Writers Association voter for the Dan Patch awards has different sets of criteria used in their decision-making process, some more thoughtful and detailed than others. But what if there was a way to make the assessment process consistent and help remove different biases by having more objective statistical metrics and other supporting data.

Drawing from other sports, being able to quantify things like strength of schedule, non-conference schedule (non-sire stakes schedule) key wins, head-to-head results, quality of wins and losses and put those into ratings are all completely applicable across a lengthy harness racing season. With that in mind, here is how I see each division.

Beginning with what might be the most open division, I’d give it to Stockade Seelster on the strength of his win in the Metro final (over Save America). A winner of 8 out of 11 races this year, he stormed through Ontario Sires Stakes competition including a win in the Super Final. Having never raced outside of Canada though, I could see him being overlooked a bit by some voters. Save America put together a string of big wins in the Nassagaweya, Champlain and Metro elimination, but went 0-for-6 since that time. Ammo shocked in the Breeders Crown for what was his second win of the year; would have likely won this division with a win in last week’s Governor’s Cup.

Another 2-year-old who has raced exclusively at Woodbine Mohawk, her accolades against the open 2-year-old filly ranks speak for themselves. Only an unfortunate race circumstance away from a perfect record, she closed out her season with a win in the Breeders Crown following other wins in the She’s A Great Lady, Champlain, and Eternal Camnation.

Another extremely tough call. Having won seven times from nine starts, the way he closed out the year with that dominating win in the Kindergarten Final followed right back up by overcoming post 9 in the Valley Victory Final (over Kilmister), has left a lasting impression. He also has an International Stallion Stake to his credit (over Winners Bet). New Jersey Sires Stakes and New Jersey Classic champion Oh Well also won the Mohawk Million which are big wins on paper; had the misfortune of breaking stride shortly after the start in the Breeders Crown. Kilmister sports a similar profile to last year’s divisional winner, King Of The North. Both had early season success including wins in the Peter Haughton before tiring somewhat towards the end of the year; not sure if Kilmister has done enough to hang on.

This one could get interesting, but Special Way has done enough to win over the late emerging and Svanstedt stablemate, Bond. Special Way has beaten top competition all season long including five straight wins over the highly talented Walner Payton, and her win in the Breeders Crown over nearly all the sports best 2-year-old trotting fillies (including over Champlain and Peaceful way champ, Righteous Resolve) was her seventh consecutive victory; deserving winner. PA-sire stake standout Bond closed out her season with wins in the Kindergarten Final and then an even more impressive one in the Goldsmith Maid; a similar route that Volume Eight took on the male’s side.

This division has been a 3-way battle throughout much of the year but should ultimately go to Pebble Beach. His wins in signature races such as the North America Cup at the start of the season and then again in the Breeders Crown at the end of the season, combined with a win in the Tattersalls Pace give him the nod. Beach Glass did put away Pebble Beach to close out the year in the Progress Pace, but I have a feeling that the Meadowlands Pace and Cane Pace winner may fall just short. Bythemissal was in control of this division following his win in the Little Brown Jug and looked to further solidify his status following his Breeders Crown elimination win but had too much ground to make up in that final; a race that would have unquestionably gotten him there. Still, a close call all around.

Maybe I’m missing something here as Treacherous Dragon is nowhere to be found in the final Hambletonian Society/Breeders Crown final poll, but I think she’s done enough to earn the top spot for this division. A winner of the Fan Hanover in June, she went onto sweep the Jugette (over Sea Silk), and then won the Breeders Crown (over Niki Hill). You can’t fault Niki Hill whatsoever for what she’s accomplished in minimal starts this year having overcome injury, but I don’t see her 3 wins measuring up to the 9 of Treacherous Dragon.

In almost direct contrast to how he won his division last year, King Of The North has been resurgent at the end of this season and that should be enough to propel him into the top spot as a repeat winner. A close-but-no-cigar type throughout much of the year, he didn’t even win his first race until his Breeders Crown elimination. But he followed that up with a no-doubt win in the Breeders Crown final and from there came right back days later to win the Carl Erskine at Hoosier. A win in the Matron would have put him closer to “lock” status, but that runner-up finish to close out the year to Double Deceiver shouldn’t hurt him. Cool Papa Bell could have taken this with a win in the Breeders Crown where he wound up fourth; that Hambletonian win alone (plus another surprise in the New York Sires Stakes final at Tioga) likely won’t be enough. Rebuff had his season end a tad early; 1:49.4 and sports fastest 3-year-old trotter will garner consideration on strength of his wins in the Kentucky Futurity and Stanley Dancer.

If there’s one selection that I’m least confident about, it’s probably this one. Jiggy Jog and Joviality have traded barbs with each other throughout the season, but Jiggy Jog closed it out in head-to-head competition with wins over her
rival in the Kentucky Filly Futurity and then again in the Breeders Crown. It seems like ages ago now, but Joviality’s earlier win against males in the Yonkers Trot may carry additional weight.

Pacer of the year – Bulldog Hanover

Trotter of the year – Bella Bellini

Horse of the year – Bulldog Hanover