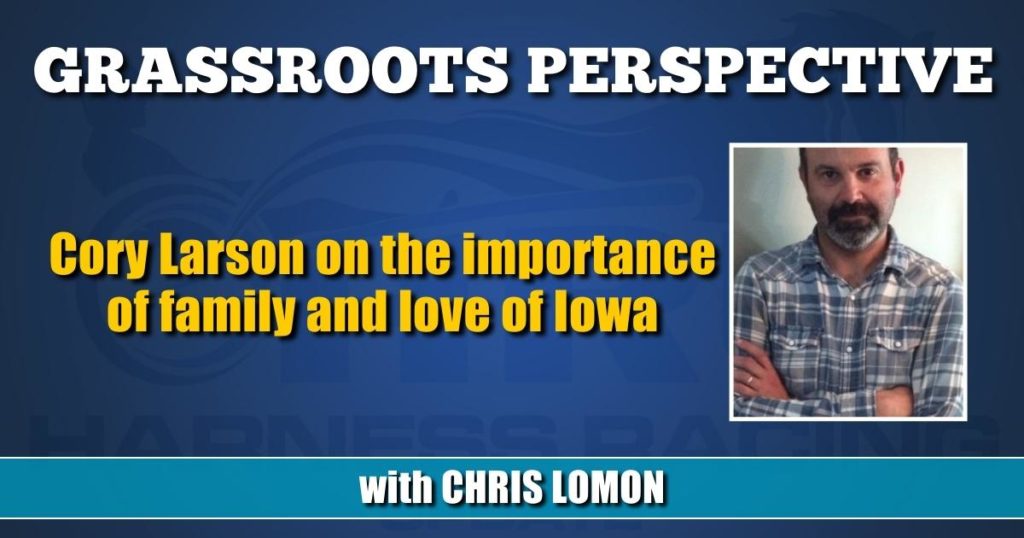 Cory Larson on the importance of family and love of Iowa

Family remains at the core of Cory Larson’s standardbred life.

There was never a sense of obligation that he had to follow in his father’s footsteps. Instead, the kid from Iowa found his own love for horses and horse racing early on.

“My dad [Brian], he’s been in racing ever since I was a baby. He got involved in the sport with some neighbors of ours, the Lems family, in Canton, South Dakota. That’s where my parents are from. Dad used to be a rodeo guy. He did everything with horse-drawn carriages, stuff like that, but then he found out that for him, the horse racing world was much more fun. He got into it, I grew up doing it and it’s what my family did every summer. Once you feel that adrenaline, it’s pretty much all you want to do.”

And so that’s precisely what Larson has done as a driver, trainer and owner.

His brother, Casey, eight years his senior, initially took the reins as the assistant to their father, a role that would eventually be taken on by Cory.

“Casey graduated high school and moved out to New York to race, so dad needed an assistant trainer. We had a horse, Holls Park Place (a pacing daughter of Park Place), and he said, ‘Well, you get to go train that one for your first couple times.’ Even though the horse didn’t show much – and only would go in about 2:08 – that was the most fun I ever had. I could hardly fit in the stirrups in the bike, I was going 2:10, and all I could think about was, ‘This is awesome.’”

Father and son eventually bought horses together. While the first few they purchased didn’t pan out on the racetrack, luck would soon come their way in the form of Boom Boom Shaboom.

A daughter of General Aidid (MN), the pacing mare delivered the Larsons several big moments right up until her final start on Sept. 15, 2018.

“She was amazing. She made that money mostly at Running Aces and the fair circuit in Iowa. She was the horse the taught me how to drive, and how to race. She could do no wrong. She would almost drive herself for you. She was laid-back and calm. For me, she was the perfect horse to learn on. It just happened that she was a really good one and taught me everything I needed to know.”

Larson headed off to college soon after that thrill ride.

It was there where he met his future wife, Katie, who quickly developed her own interest in the horses and standardbred racing.

“Katie, my dad and I bought a horse together. It was her first one. The horse’s name was Dakota Ole. He ended up being okay. When he was two and three, there were six or seven horses that were all the same class of horse. One week you could win and the next week you could be last. You never had any clue how it was going to go.”

One sure thing was the shared joy of racing between husband and wife.

Their affinity for the sport has grown exponentially since they started working together.

“She really does love it. She trains every day with me, jogs horses, works in the barn, and has started doing her own training trips. She’s hooked.”

Currently, the couple has four racehorses, four broodmares and four weanlings. All live together on a 30-acre farm in Marshalltown, about an hour’s driver northeast of Des Moines.

The goal is to expand the operation, albeit modestly, in the coming years.

“Now that we live in Iowa, we can have broodmares, raise our own racehorses and every year, have about six to eight horses competing. That’s our hope. So far, we’ve been pretty fortunate with how things have gone. We’re both on the same page with how we want to run the operation. Luckily, the horses that we have now have helped pay the bills, and kept things going for us.”

Larson has high praise for the racing product in his home state. Two things in particular come to mind.

“The camaraderie amongst the horsepeople and the fact that we actually have good purse money are what makes racing here so good. We race every weekend. My full-time job is a farrier. I shoe horses, all the way from racehorses to barrel horses, show horses and riding horse. My wife is in the financial industry and works for a top company in Des Moines. On the weekend, we get to load up, go to the races, show up, and everyone is friends. We have a 10-month-old daughter, Eva, and everybody treats her as their own kid. At the same time, we get to go out there and race for good money. It’s hard to beat that.”

And it’s a big reason why Larson is happy to call the Hawkeye State his home base.

While he does race his horses outside of Iowa, there is plenty, on and off the racetrack, to keep him content right where he is.

“It’s been a great situation for us, both racing and as a family. My brother went to New York to race and raise a family, but they ended up coming back here. For me, it’s important to be able to balance my career and my family. In Iowa, we allow that to happen. I guess you could say that it’s family racing.”

When they aren’t at the racetrack or in the barn, the Larsons have their own personal fishing spot on their property.

It’s become a go-to place for the family.

“We love it. We take our Ranger out there and our daughter loves that. We go out there together and we’ll fish for about 45 minutes, maybe an hour, and just relax and have some fun.”

With every fishing spot comes a fishing tale.

And Larson has one.

“I had the biggest bass on the line that I was ever going to have. Before we could get it in, and before dad could get over to help me, it broke my line. So, we’ll blame it on him for moving to slow.”

Thankfully, the Larson horses have shown a penchant for a solid late brush, coming up big when it counts the most.

All of it the end result of a familiar family effort.

“When you can involve your family with racing, it really is something special.”