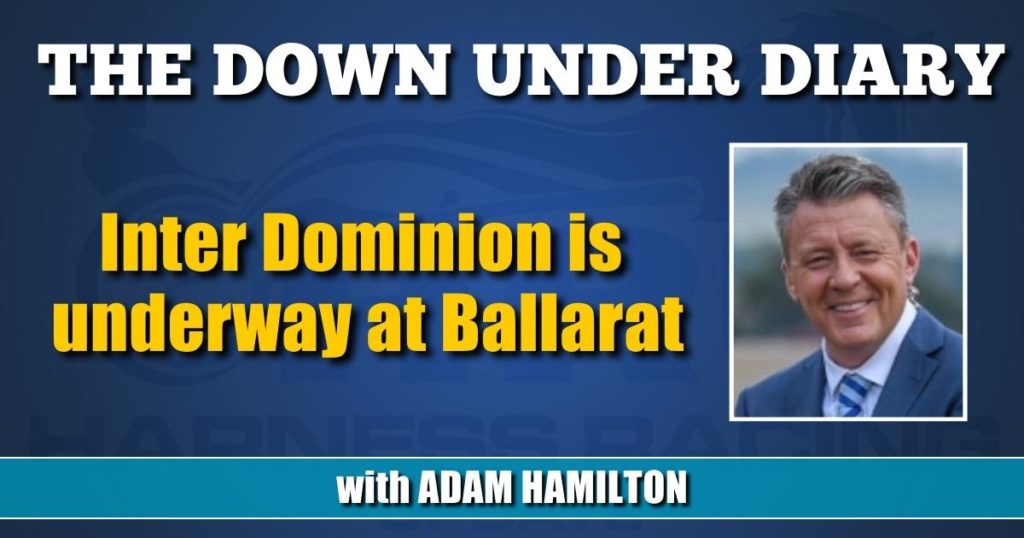 Inter Dominion is underway at Ballarat

The famed Down Under series kicked off Saturday night.

It is harness racing’s most gruelling test and it’s not for every horse.

Four compulsory races in just 15 days at four different tracks – some as much as a five-hour return drive – and over varying distances ranging from 1690m to 2760m.

To be crowned champion you not only have to relish the three qualifying races in the first eight days, but be the best to then back-up a week later and win the Grand Final.

And there are two divisions – for pacers and trotters.

Some of Down Under’s most gifted pacers – notably Popular Alm and Christian Cullen – simply haven’t coped with the format. Others, headed by the incomparable Blacks A Fake, absolutely thrived on it.

There is definitely no Blacks A Fake in this year’s Inter Dominion, which kicked-off at Ballarat on Saturday night (Nov. 26).

The series gets its name from the rivalry between Australia and New Zealand – hence the Inter Dominion – but Kiwi participation is thin this year.

NZ’s major hopes sit with superstar trotter Bolt For Brilliance, but he went into the series under a health/fitness cloud after illness sidelined him during the recent huge NZ Cup Week Carnival in Christchurch.

There was no runner in either division under more scrutiny when the Inter Dominion kicked-off at Ballarat last night.

Opinions varied from Bolt For Brilliance being overrated to him simply having to bring anything like his best NZ form and he’d toy with his rivals.

Herlihy, one of NZ’s most decorated horsemen, was sporting a big grin when Bolt For Brilliance worked to the front soon after the start and won as he liked.

The times were slow and the opposition nothing amazing, but the simple fact he’d turned-up and won after his health issues and the trip across from NZ was a key moment in the series.

“It’s always as much relief as it is excitement after something like that,” Herlihy said. “Everything seemed good again with him back home, if we’d even seen one thing to worry about, he wouldn’t have come.

“It’s an ideal way to start the series… a win and a soft run. He should really build through the series now.”

Herlihy is chasing a remarkable fifth Inter Dominion Grand Final win with Bolt For Brilliance, but his first since 2006 on the trotter Delft.

Victory will make him equal second with greats Brian Hancock and Natalie Rasmussen on the all-time winners’ list. Only Mark Purdon has more with seven wins.

The series continues quickly for Bolt For Brilliance and all horses with the second round of heats over the sprint 1690m distance run at Shepparton on Tuesday night (Nov. 29) (Australian time).

Even after just one round of heats, the trotting series looks thin at the top. Bolt For Brilliance is a hot favorite from Just Believe and Queen Elida – who ran first and second in the opening heat – and next best is Majestuoso, who ran a fair third to Bolt For Brilliance last night.

Crucially for the powerhouse Kiwi, the final is over a gruelling 2760m distance at Melton.

The pacing equivalent of Bolt For Brilliance going into Saturday night was the enigmatic Expensive Ego.

Maybe enigmatic is harsh, but Expensive Ego looked the sport’s next big thing this time last year. He’s only won two races from nine starts since.

There’s some redemption on the line for him, too. Expensive Ego won his three heats and was first past the post in last year’s Inter Dominion final in Sydney, only to be stripped of the crown on protest for interfering with runner-up Boncel Benjamin in the closing stages.

Debates still rage over whether that was a fair ruling or not.

Champion driver Luke McCarthy, older brother of Andy and Todd, found himself having to defend Expensive Ego after a mystifying flop when seventh after leading in the Group 1 Victoria Cup at Melton on Oct. 8.

The big, burly entire bounced-back with a Menangle win since, but all eyes were on him on Saturday night.

Expensive Ego didn’t win, but his monstrous second was THE effort of the night. On a very wet track, the 5-year-old sat parked, mauled the leader and favorite Mach Dan, and was just edged-out late by the classy Act Now, who had the cold sit on him.

“It was a terrific run, but only what we expected,” McCarthy said. “We’ve been happy with him all along, but the Victoria Cup run baffled us as much as anyone.

“We brought him in a bit on the big side, like all our horses, so they could improve through the series. It’s a great start.”

Expensive Ego moved into favorite for the Grand Final.

Champion training couple Emma Stewart and Clayton Tonkin are best known for their success with younger horses, but took a giant step to tick the “open-class” box by winning two of the three pacing heats at Ballarat Saturday with Act Now and Honolua Bay.

The other stars of the night were husband-and-wife, Greg Sugars and Jess Tubbs, who combined to win two heats at their first tilt as a stable at the Inter Dominion. Just Believe won his trotting heat and is second favourite for the final, while Better Eclipse won his pacing heat and his third favourite in that division.

Sugars tasted his first Inter Dominion success as a driver when he won the trotting final on Maori Law for an outside stable.

“That was terrific, but teaming-up with Jess and our horses is something special,” Sugars said. “It’s exciting to get a couple of wins on night one and both of them had pretty comfortable runs.”

Opening night taught us a lot, but Inter Dominion history tells you things can evolve quickly.

But for now, Bolt For Brilliance is a standout in the trotting series, while Expensive Ego and tough stayer Majestic Cruiser look the top picks in the pacing division.