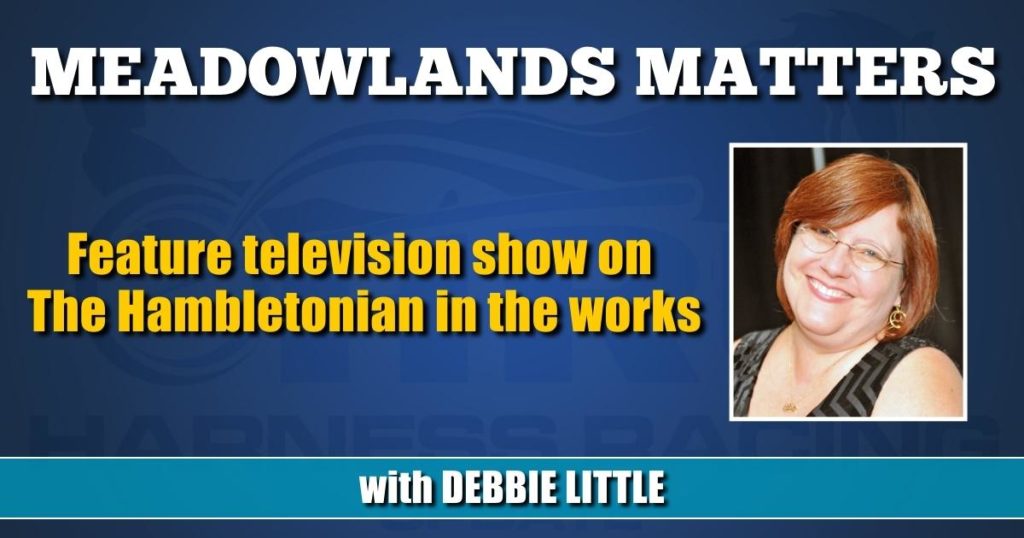 Curtis MacDonald’s Cujo Entertainment is producing an
hour-long Hambletonian show that will air in two weeks’
time on the CBS Sports Network.

Up until this point, the Hambletonian has long had its own TV show, even if it wasn’t always live.

For a brief time this year, there was a real possibility that the streak would end, but the show will go on.

Curtis MacDonald’s Cujo Entertainment will be producing the show that will be shot on Hambletonian Day and aired on the CBS Sports Network (CBSSN) on Sunday, Aug. 21, from 5:30-6:30 p.m.

“It’s more of a historical hour that features the 97th Hambo and Oaks,” said Moira Fanning, director of publicity/chief operating officer of the Hambletonian Society.

With so much content flooding the tube these days, it was initially difficult to get an hour-long block of time for the historic race. For example, at 6:35 p.m., off time for the Hambletonian on Saturday, Aug. 6, CBSSN will be showing 3ICE, live three-on-three professional ice hockey action.

“When the planning started for the Hambletonian, I was asked to do the cable cam again and then we threw around the idea of maybe COSA-TV coming down to do a show because I believe at the time CBS didn’t have airtime for the Hambletonian,” said MacDonald. “Moira wanted to do more than just a simulcast show. A simulcast show serves a purpose for handicappers, but she wanted the
entertainment value of a network-style show like what we do for COSA-TV.

“If you’re betting, the simulcast show is great because Dave [Brower] and Dave [Little] and whoever else give you what their selections are and all the handicapping type things, but a lot of people just want to sit back and watch it. They want to be entertained. Whether it’s two, three, four hours, whatever it is, they want something to be entertaining and that’s where COSA-TV kind of has a bit of a niche. We do that. We cover all kinds of events in Ontario, where we do it strictly for the entertainment value. Now yes, we do show the odds and we talk about handicapping, but we focus on the people in the paddock. We focus on the stories. We typically will do a feature or two per show where we highlight the horses in the race. So, it’s kind of more of an entertainment show than a simulcast show.”

With CBS originally off the table, the Hambletonian would still be shown live on Fox Sports 1 [FS1] as part of Saratoga Live presented by America’s Best Racing, but it wouldn’t be a standalone production.

“But then CBS came back and said, ‘We’ll give you a primetime hour the following week if you want to do a kind of historical Hambletonian and recap of the Hambo Oaks,’” said Fanning. “We all agreed that the Hambletonian deserved a little more focus than whatever America’s Best Racing could squeeze in or not squeeze in and to look at the 97th Hambo, you shouldn’t have to page through 16 Meadowlands races to find it.”

For MacDonald, it’s a great honor to be producing the sport’s biggest race and to again be part of their biggest day.

“It’s actually funny,” said MacDonald. “I was talking with my wife [Jaimi] about this the other day and I said probably in 2018 – or something around there – we went and did work for Harness Racing Update to cover the Hambletonian. And every year since, minus COVID, it seems like we’ve been more involved with the Hambletonian. In 2020, Greg [Blanchard] and I went out and shot a feature on Luc Blais, because they won in 2019 [with Forbidden Trade]. So, we shot a feature on Luc Blais and Bob McClure to show on the CBS Hambletonian show. Then, in 2021, I went down and did the cable cam and now this year we’re doing a show. It seems like we went from just watching it on TV here in Canada to having a little bit of involvement and now we’re really heavily involved.”

Just as he did for the 2021 Breeders Crown, MacDonald will be live streaming on Hambletonian Day as part of COSA-TV, which will broadcast live from 3:00-5:15 p.m., then take a 45-minute break where they will show the feed of the Big M simulcast show, before coming back live at 5:55 p.m. with the show for CBSSN.

Throughout COSA-TV’s broadcast, which will be hosted by Greg Blanchard, with Michael Carter in the paddock, MacDonald will utilize additional equipment, such as a super slow-motion camera at the finish line, to add to the experience.

“We add a bunch of extra cameras that don’t necessarily fit in simulcast, because with simulcast you want to see the race,” said MacDonald. “You want to see where the horses are at all times because you’ve got money on that.

“We’re trying to entertain you and give you those up close, tight shots that are more entertaining to watch than a simulcast-type show.”

For the CBSSN hour-long delayed retrospective, Greg Blanchard and The Meadowlands’ own Dave Brower will be at the desk with Michael Carter in the paddock.

The Meadowlands’ Jessica Otten, along with Gabe Prewitt, will once again be doing the Saratoga Live show, which will air on Fox Sports 2 from 12:30-5 p.m. and on FS1 and SNY from 6-7 p.m.

As always, The Meadowlands simulcast show, hosted by Brower and co-hosted by Little, will be live on Facebook and YouTube starting with the pregame show at 11:30 a.m.