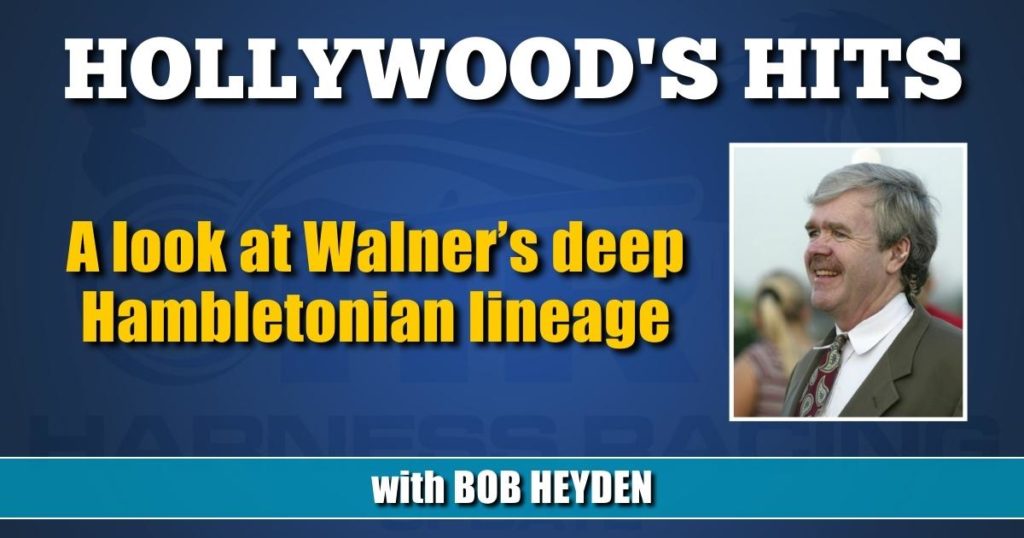 Six of the 20 horses in either the Hambletonian or Hambletonian Oaks were sired by Walner and come from his first crop — three in each race. A look at the strong Hambletonian heritage of Walner and it is easy to see why.

In 1929, Volomite was second in the Hambletonian. He sired…

Worthy Boy, who was second in the 1943 Hambletonian. He sired…

Stars Pride who was second in the 1950 Hambletonian. He sired…

Super Bowl, the 1972 Hambletonian and Triple Crown winner. He sired…

Garland Lobell, who did not compete in the 1984 Hambletonian, but he sired…

Conway Hall, who was fourth in the 1998 Hambletonian. He sired…

Windsongs Legacy, the 2004 Hambletonian and Triple Crown winner. He sired…

Chapter Seven, who was fourth in the 2011 Hambletonian. He sired…

Walner, who did not compete in the 2017 Hambletonian.

Super Bowl is next on that list with six Hambletonian winners. His 23 checks are the all-time most.

Conway Hall had one Hambletonian winner.

Windsongs Legacy had one Hambletonian winner and died prematurely at age 8.

Chapter Seven and his son Walner placed 18-of-36 in the elims combined and now have 9-of-20 in the Oaks and Hambletonian combined in 2022.

SIRES THAT WON THE HAMBLETONIAN VIA THEIR SONS

And it never once happened when the race was held in DuQuoin, IL. All 24 winners were sired by a horse who did race in the Hambletonian.

Here’s a list of the last 11 times the winning sire did not start in the Hambletonian:

WALNER IS IN GOOD COMPANY IN THE FIRST-CROP DEPARTMENT

First crop sires who have taken down the Hambletonian in the last 50 years:

Andover Hall in 2007 with Donato Hanover. The sire also won the Oaks with Danae.

Victory Dream in 1999 with Self Possessed

Valley Victory in 1994 with Victory Dream.

Mystic Park in 1987 with Mack Lobell.

Dexter Dunn in 2019 was fourth with Soul Strong

Jason Bartlett in 2017 was eighth with Guardian Angels S

Joey Bongiorno in 2016 was seventh with Make Or Miss

Corey Callahan in 2012 was sixth with From Above

Yannick Gingras in 2020 was seventh with Hard Livin

Matt Kakaley in 2015 was seventh with Habitat

Mark MacDonald in 2016 was sixth with Reigning Moni

Andy McCarthy in 2017 was sixth with Sortie

Matias Melander in 2020 was 10th with Rome Pays Off

Andy Miller in 2007 was ninth with Xactly Hanover

Ron Pierce in 1991 was ninth with Can’t Be Jimmie

Jimmy Takter in 1989 was eighth with Classic Air

Tim Tetrick in 2007 was sixth with Pampered Princess

Scott Zeron in 2015 was eighth with Billy Flynn

Simon Allard in 2019 with When Dovescry

Andy Miller in 2008 with Creamy Mimi

Luc Ouellette in 1998 with Fern

Wally Hennessey in 1996 with Moni Maker

Mal Burroughs in 1994 with Gleam

Bruce Riegle in 1992 with Worldy Woman

If Jimmy Takter drives in the Oaks, he will become the first driver to participate in the Hambletonian Oaks in five different decades. His first was in 1989 with On A Cruise. He was 28 in 1989 and 61 now. Yet, Takter has never won the Oaks as a driver.