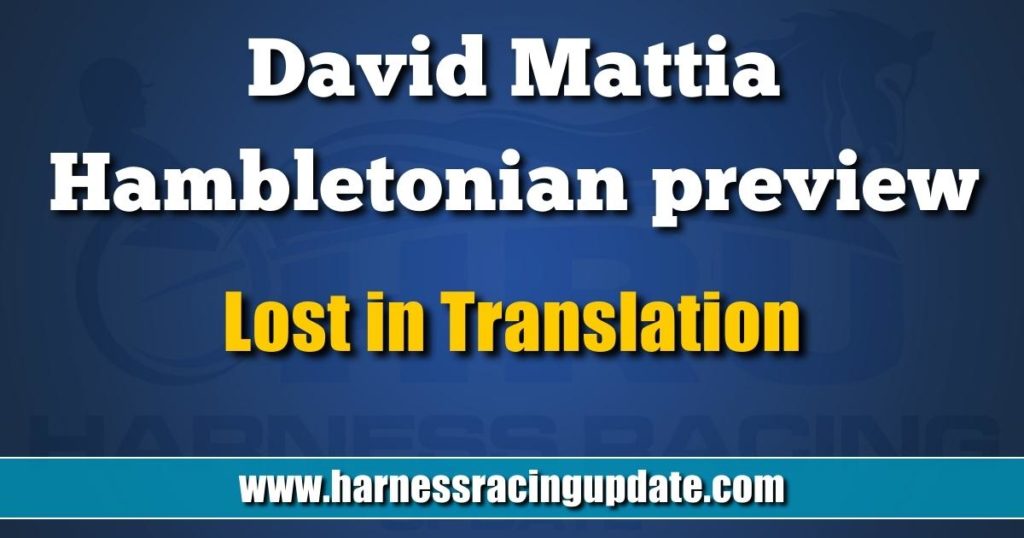 How Svanstedt Stable assistant Christian Giallorenzo took a 30-year vacation in Sweden and returned to the United States in time to help send out Jiggy Jog S and Justice in this Saturday’s Hambletonian eliminations and Baptism in the Hambletonian Oaks eliminations.

by David Mattia for the Hambletonian Society

It’s said that life takes you to unexpected places, but it’s love that brings you back home again.

Such is the case with the intrepid Christian Giallorenzo, who currently works in New Jersey for the Ake Svanstedt Stable as a trainer, a general manager, and just about everything else a multi-talented and trusted horseman could do in a top-tier racing stable where excellence and integrity mean everything.

It’s very hard to find anyone in the harness game who doesn’t know Giallorenzo, but some backstretch die-hards, especially those on the East Coast of the United States who can harken back to the late 1980s, wonder why Giallorenzo went missing for nearly 30 years. How did a Pocono Downs backstretch brat, a kid who was working everywhere, all the time, vanish into thin air only to return nearly three decades later working at the top of the game in harness racing? How did this happen?

It’s an interesting story that began in Huntington, NY, a small city on Long Island where Giallorenzo was born and raised.

“My parents divorced when I was a kid, and my father (Lou Giallorenzo) took me on weekends to Pocono Downs where he worked as a driver and trainer. I think I started working with harness racehorses when I was about 7 or 8 years old,” Giallorenzo said.

“When I got a little older, I started spending entire summers grooming, jogging, and training for my father and for other people stabled at Pocono Downs. I dropped out of high school when I was 15 and went to work for Roy Marohn at The Meadowlands and I lived in the racetrack dorms. After that, I went to work breaking babies in Florida for a guy named Bill Lambertus who I knew from Pocono. I think I was about 19 at the time. I did this back-and-forth thing for about two years, but it was difficult, and I was lonely, so I went back to Pocono Downs.”

Not long after returning to Pocono, Giallorenzo got his first job as a trainer working for Per Eriksson in Florida and New Jersey.

“Working for Per Eriksson was my first job as a second trainer,” Chris said. “That’s when I became addicted to trotters. I always was partial to trotters but breaking and developing juveniles for Per, in a stable that was dedicated exclusively to trotters, is when I realized that was the way to go. That’s what I wanted to do, but then I got sidelined by what was supposed to be a vacation in Sweden with my girlfriend who was Swedish.”

“Sidelined” turned out to be an understatement, and that’s where the mystery of his disappearance begins.

Giallorenzo took that vacation with his girlfriend, but he didn’t come back – not for a long time.

Though he may not have realized it at the time, Giallorenzo’s dream was coming true, but like all worthwhile dreams, it came true in the long and serendipitous way most worthwhile dreams are realized. His vacation in Sweden landed him 6,000 miles from home in a country he didn’t know, hearing a language he didn’t understand, and where the only person he knew was his girlfriend.

“I’d lined up a training job with the famous Finnish trainer Pekki Korpi back in Florida, but when I realized I wouldn’t be going back to the States, I had to rethink my options,” Giallorenzo said.

“The next thing you know, I ended up in a town called Linköping. In a few weeks I started working at this place where they repaired and maintained camping trucks or caravans. It’s not what I wanted to do, but it was a job.

“I started learning to speak Swedish formally, but the thing that worked best, especially when I worked around older people who didn’t speak English, was to speak whatever Swedish I could to my co-workers and insist that they spoke Swedish to me. I assume I must be good at languages because I learned it quickly.

“Kids in Sweden today learn English in school, but the older men I was working with came from a time when the schools didn’t teach English. Gradually, at a job where I was surrounded by people who spoke only Swedish, I learned the language to the point where I became fluent.

“In fact, now that I’m with Ake, I sometimes translate for him when we have our weekly meetings. Ake speaks English well now but sometimes he comes upon a word or phrase he doesn’t know, and I fill it in for him. I guess you can say that another part of my job in the Svanstedt Stable is working as an interpreter or a translator. My Swedish friends joke about how I speak Swedish with a New York accent, but that’s gradually fading.

“Anyway, after two years in Linköping, I started getting my life together. You know, the normal things. I found an apartment and got set up in general. My girlfriend and I had a baby, my daughter Sandra. She’s 27 now and training to be a police officer in Sweden. Later on, we had two more children; my son David who’s 16 and my son Kevin who’s 20.

“We were content, but the weather was tough, at least for me, or tough enough that I had to get used to it, which I did. Living in Sweden was much more laid back than it is here in the USA. On the job you get about seven weeks of vacation per year, and a lot of paid sick days. I know that when I worked in the States that there was practically no such thing as a vacation or a paid sick day – especially if you worked in racing.”

Despite the cushy aspects of working a job in Sweden, it didn’t take long for Giallorenzo to ditch the Winnebago repair gig. He found a training job with the great trainer Roger Grundin – a master reinsman who is one of the most famous names in Scandinavian harness racing.

“Working for Roger Grundin at that level, and I did that for a few years, I started to understand that there was a huge difference in the way they train horses over there,” Giallorenzo said.

“I mean, I already knew that the Swedes had their own system for training, but the obvious thing, the thing that really stands out, is that pacers do not exist over there, and no one has any interest in them. The training itself is more about conditioning the horse. You jog and train longer distances and you do it on softer tracks. The horses become very socialized because they jog in large packs. It’s not unusual for 10 to 20 horses to jog together. It’s totally different in a way that’s hard to describe. You don’t see it, but you feel it. It’s like my life experience in Sweden in general. If you don’t live it, you might not get it.

“You have to understand that harness racing in Sweden, and in all the Scandinavian countries, is like baseball in the United States. It’s a national pastime. It’s an important part of the culture. Everyone you meet knows about harness racing. Horses become celebrities. It used to be like that in the USA, but now it’s not.”

After 20-some years, Giallorenzo started thinking about coming back home to America, but he had a family to support. Sadly, his partnership with the girlfriend who took him on this long vacation, came to an end. Still, he had three children who needed him and any thought of leaving for America was put on a shelf.

“Not long after my breakup, I met my current wife, Camilla,” Chris said. “We got married and had two more children. My son Justin is now 11, and my daughter Jaquline is 10.

“Camilla knew that my dream was to return to America, and she encouraged me to do it. She told me to do it before I got too old. So, I got everything set up in Sweden for my whole family and lined up a job with Erv Miller in Pennsylvania. My plan was to work for Erv and then, as I set myself up over here, I would send for my wife and children… and that’s what I did.”

Giallorenzo returned to the USA in 2012 and began working with Miller.

“I was surprised to see that racing in the United States was about the same as it was when I left, but I had to readapt. Erv Miller is an old-school trainer, but it was like learning to ride a bike for me. I never forgot the old ways. My biggest trouble when I came back had nothing to do with going back to American horse training. The real trouble was that when I returned to America, I found out that I had no credit score. I didn’t exist. Renting an apartment and utilities is almost impossible when you have no credit score. I had to live with Erv until I could straighten that out.

“Things finally worked out and I sent for my wife and my two youngest children, but after only two years, we had to return to Sweden because my wife’s father was sick. I came back in 2019 and went back to work for Erv.

“Right after that, I heard about an opportunity to work as a trainer for Ake Svanstedt and I jumped on it. I love it here and it was the greatest move I ever made. Ake is beyond exceptional. He is beyond great in terms of horsemanship. He sees things that no one else can see. We have about 80 horses in our barn, and he knows everything about each one of them. It’s amazing how he’s on top of everything that’s going on.”

On the day we spoke to Giallorenzo, he was returning home from The Meadows where three of the many horses in his charge had raced. His day had started at 4 a.m. with the long ship to The Meadows and now, returning to the Svanstedt Stable late into the evening, he was happy to report that all three fillies, Virgin Mary S, Ebbies Lady, and Red Light Lady had finished second in each of their Pennsylvania-sired events.

“I love these three fillies and I love my job,” Giallorenzo said. “It’s easy to say that maybe I am using this experience to eventually go out and have my own stable. I mean, that’s a possibility for every trainer who works for a top stable, but I’m in no hurry to move on. I’ll stay here another 10 years or more and be perfectly happy.

“It’s the perfect place for me. I’m back home in the USA, but as far as the horses go, I’m kind of still in Sweden. I love my wife, I love my children, and I love my life. I couldn’t possibly ask for more. It’s really a dream come true even though it took a long time.”

Okay, so now we know all about the mysterious disappearance and reappearance of Christian Giallorenzo. He simply went on a very long vacation to Sweden and returned with some priceless souvenirs – beautiful family, a full heart and a full life.

That’s a nice vacation, isn’t it?