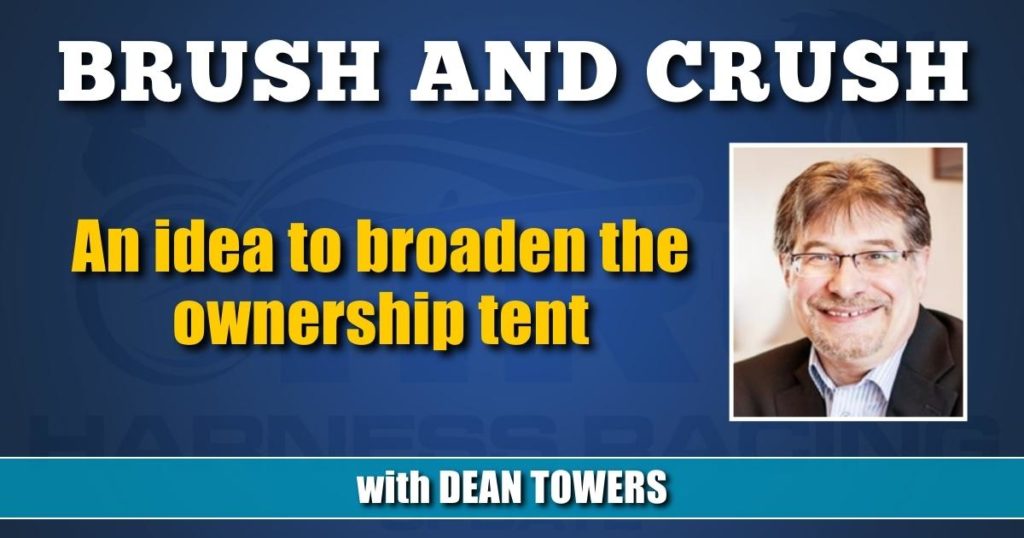 An idea to broaden the ownership tent

Based on a suggestion by Eric Cherry, how one long-term condition sheet change
might signal to the grassroots that the sport is open for business again.
by Dean Towers

My phone rang last week and it was someone many of you know – Eric Cherry. I am not sure how or why (as Cherry is pretty ubiquitous in the sport) but it was the first time I’ve ever chatted with him. He, like many of us, thinks way too often about harness racing, and I was privy to a long chat, filled with ideas. One of them made me pause, because it’s a topic I’ve thought about a lot over the years.

We all know foal crops have been down for some time. We also know in some jurisdictions it’s not primarily because of a lack of effort, or purse money, and there are glimmers of hope. Ohio’s sires stakes program has done remarkably well with fair racing, the Buckeye Stallion Series and open Sires Stakes. Perhaps this is a big reason why Scioto and Northfield have little trouble filling cards. It’s big tent; everyone can play.

But we have not seen similar success across much of this hyper-competitive, inflation spiraling market.

If we look at yearling prices, the top of the food chain appears to be fairly healthy. But the bottom – the mom and pops, the low-cost sire, the mare bred by one-time owners who can’t afford Captaintreacherous – doesn’t seem to be faring too well.

Helping them out is where Cherry’s idea comes in.

What if there was purse money set aside for non-winners one and two, and maybe even three, restricted to horses sired by a stud standing for less than, say, $2,500?

At Mohawk that would be a nice-sized purse of $12,000-$18,000, something many people dream about with a small sire, or dam, who normally toil at the B tracks or Fairs. At the Meadowlands it would mean being able to race at the Mecca of the sport, for good-sized purses that can make most of your year’s expenses.

Most importantly, these smaller-time trainers would not have to race a $600,000 Luc Blais yearling, or $800,000 Nancy Takter buy. In fact, since I don’t think Luc or Nancy have had a horse sired by a $2,000 stud in their barns since, well, probably forever, they would not even have to race anything trained by them. In addition, Ron Burke is not heading to the sales to take advantage of this edge either. He’s got bigger fish to fry.

Why this would have to be a long-term commitment is pretty obvious. It’s likely the classes won’t fill for a little while. But with the certainty this money is there, it could change the way a lot of smaller trainers and owners who have been priced out of the business think, and act.

Perhaps it could introduce some new sires. Maybe it could increase prices for broodmares at the low end, or for a partnership that owned a cheap mare that they enjoyed, it gives them a chance to get into the breeding game for a modest investment.

Why Cherry’s idea makes philosophical sense, in my view, is because it allows harness racing to be exactly what it is.

This sport is not, and never will be thoroughbred racing. Our Triple Crown will not be covered on NBC or ABC. Sheiks will not have a large stable at Yonkers, and the Queen will probably not be starting up a trotting club. What harness racing has always had, is grassroots horsepeople in almost every state and province. Historically, it’s the sport where a mom and pop with a broodmare could breed a horse and compete, and have a little fun; while paying the bills, and sometimes getting lucky with a home run horse.

That’s the sport we all grew up with. That’s the sport that I think we all know we’ve lost a piece of. And that’s why I thought Eric Cherry’s one little idea was worth writing about.