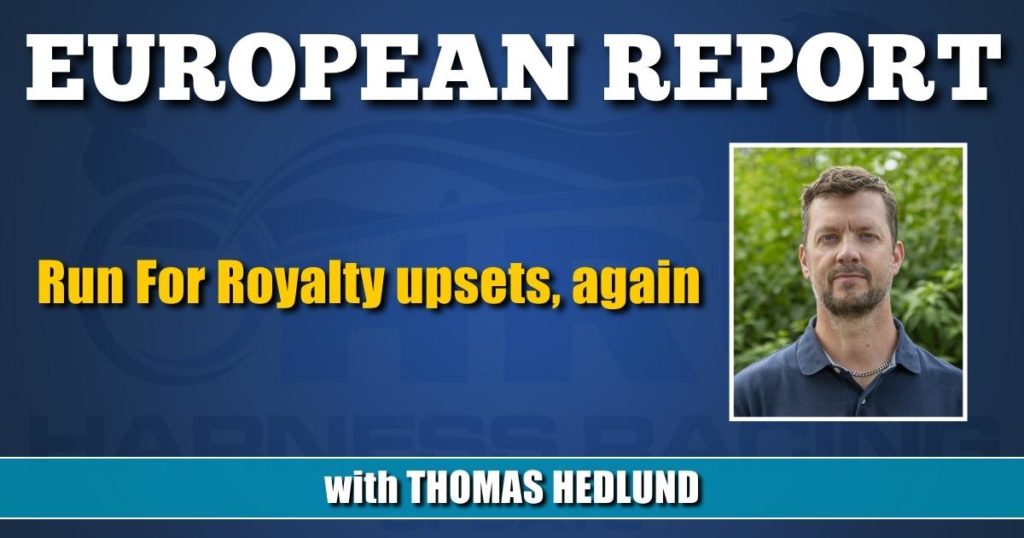 Pekka Korpi trained Run For Royalty (R.C.Royalty) came back strong after the “two races in two days-triumph” in Suur-Hollola in Lahti, Finland two weeks ago. On Sunday (July 17), 8-year-old trotter followed that up with a mild upset in the $140,000 St Michel-Ajo mile race in Mikkeli.

Global Withdrawn flew to the front after 300 meters in battle with quick starter and early leader Next Direction and the pace was set high throughout the race. Next Direction’s driver Hannu Torvinen opted for an offensive tactic as he defended position first over when first choice Mister Hercules attacked three wide, aiming for that position after 500 meters. Mister Hercules was, by then, more or less without a chance threatening for the win and leader Global Withdrawn kept the pace high in front.

But behind the leader, Janne Korpi found the right path with Run For Royalty and the duo attacked just as the stretch approached. Run For Royalty disarmed a brave leader and Janne Korpi had control over the rest of the opponents. Makethemark finished strongly between horses as runner up for driver Ulf Ohlsson.

Run For Royalty must by now be considered the best older trotter in Finland since he has claimed two of the country’s biggest races within two weeks. When he hit the wire as winner in Sunday’s race, he did it in 1:52.1.

Leader Global Withdrawl held to the bronze medal and the race became a great success for the Finnish harness racing business. As told before, Run For Royalty was one of his crop’s best trotters as a 3-year-old and it seems like he has found the peaking level as racing horse now, as an 8-year-old.

The race was quite sparkling as leader Floris Baldwin, driven by Kristian Malmin, defended his position in front when outside trotters Usain Töll, Milliondollarrhyme and Click Bait challenged for a spot in the lead. Don Fanucci Zet, who started behind horses had problems following during the race’s first quarter of a mile and when the field hit the first 600 meters, driver Örjan Kihlström tried to make a move three wide with the first choice Don Fanucci Zet.

The 6-year-old Hard Livin son fought bravely three wide at the back stretch and he reached a position outside of leading duo Floris Baldwin and Click Bait as the field turned into the last turn. From a third inside position, Magnus A Djuse steered his drive Brother Bill out in the last turn and when Milliondollarrhyme couldn’t keep his pace, Brother Bill was all of a sudden three wide, covered by Don Fanucci Zet. At the top of the stretch, leader Floris Baldwin was beaten by Don Fanucci Zet, but on the outside Brother Bill attacked with great speed. Brother Bill’s driver Magnus A Djuse did not care to keep Brother Bill in the right lane over the stretch, but let the horse run while he got closer and closer to the far outside lane. Brother Bill finished strongly by that move and it was basically impossible to decide which of the two horses reached the wire first.

Don Fanucci Zet raced the last kilometer three wide, Brother Bill was served a perfect inside trip by his driver and the two trotters were almost inseparable even when the photo was looked at. By a nose, Don Fanucci Zet hit the wire first and Redén’s horse has now claimed two big races in Sweden after the mishap in the Elitloppet final, where he made a break from the start.

The mile rate over 1,640 meters was 1:53 and Don Fanucci Zet’s next objective is Hugo Åbergs Memorial at Jägersro on July 26.

Usain Töll had no luck with the trip (interfered in the last turn), but finished great as third for driver Björn Goop.