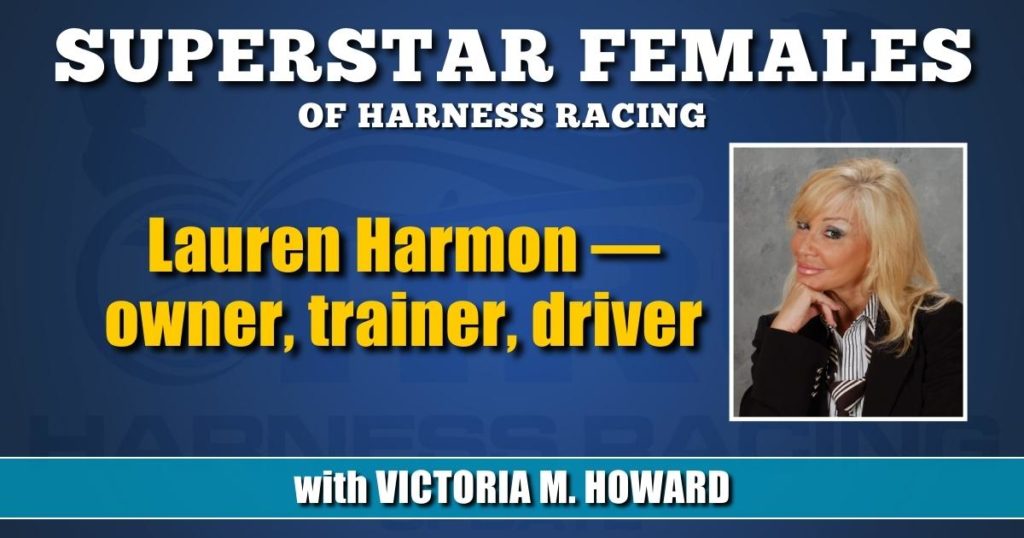 Does the name Harmon sound familiar? If you’re involved in harness racing it should. The Harmons, originally from New Jersey, have made a name in the sport. Now, third generation Lauren Harmon is carrying on the tradition by following her family’s footsteps.

“I was born in Jackson, Michigan, not too far away from the old Jackson Harness Raceway. My father and his family moved close to Michigan when he was young, so I grew up there.

“My grandfather, Reid Harmon — my father’s dad — owned, trained and drove standardbreds, as well as my father, Don, and his brother, Rob. My father’s wife, Krista, was also raised in harness racing.

“Presently, dad races at Hoosier, and Uncle Rob races mainly out east. Growing up on a farm was heaven and ever since I can remember I wanted to work and race horses.

“I would see the horses turned out on the farm and run around with them pretending we were in a race. I followed my dad to the track and fairs all the time for I didn’t want to do anything else — even at that young age.”

“I got my drivers/trainers license in August of 2018, just after I turned 18. At the time, I co-owned a horse named Static Camber with my step-mom and drove him in a qualifier at Hoosier Park; and again at the Van Wert County Fair, finishing third.”

Lauren has 14 wins on her resume and has driven both pacers and trotters. Presently, she is stabled at Northfield Park. Lauren owns and trains one horse, Emerald Chip, who she recently won an amateur race with at Northfield in 1:57.2. She also works for trainers Anthony MacDonald and Jason McGinnis of TheStable.ca.

“My plans are to continue working under MacDonald/McGinnis, as well as grow a small stable of my own. I am learning so much.”

Lauren credits most of everything she knows from her idol —her father, Don.

“I’ve always looked up to him and want to be as successful as he is. I’m grateful for all his constructive criticism, for it has helped me along the way. I go to my dad for everything.

“He usually calls me after my drives to discuss the race and how or what I could have done differently.

“He can be hard on me at times when it comes to training and driving. He teaches me to learn from my mistakes and how to fix them or what I could do different.

“I remember him telling me stories of his racing adventures in Michigan, Ohio, Florida, New Jersey and California. He raced all over the United States. If it wasn’t for my dad I wouldn’t be the driver or trainer I am, let alone had the courage to follow my dream.”

Lauren’s older brother also helped out at the barn before enlisting in the service, and her younger half-sister, who lives with Lauren’s father and stepmother, helps with the horses as much as she can.

“I think my sister will be a better driver than me one day,” Lauren said.

“I get such an adrenaline rush when I win a race. My biggest thrill was driving one of my uncle’s horses in an amateur race in the GSY Series at The Meadowlands. It was my childhood dream come true to have driven there.”

“Seeing someone organize such a large operation racing in many different tracks across the States. I’ve learned so much from Anthony — from caring for the horse to training and driving.

“The best part about The Stable is the variety of horses they have. There are babies to aged racehorses and claimers to sire stake horses.

“Not only does Anthony manage over 100 plus horses, he also deals with hundreds of owners. Watching and listening how he communicates with his owners has helped me learn how to communicate and explain things differently.

“It’s so gratifying and reassuring knowing I’m working for people that want me to be successful.”

I asked Harmon if the male drivers intimidate her.

“Not really. If you let them intimidate you, you will be intimidated. I think if you have confidence out on the racetrack and behind a horse, as well as the determination to be the best you can be, no one can intimidate you. I’m definitely my own worst enemy,” she said, laughing.

As far as her future plans and goals, the young woman said, “My goal is to obtain my own small stable to train and drive, and hopefully continue my career and success in the business. I want to keep the family name going and hope to be as successful as they are.”