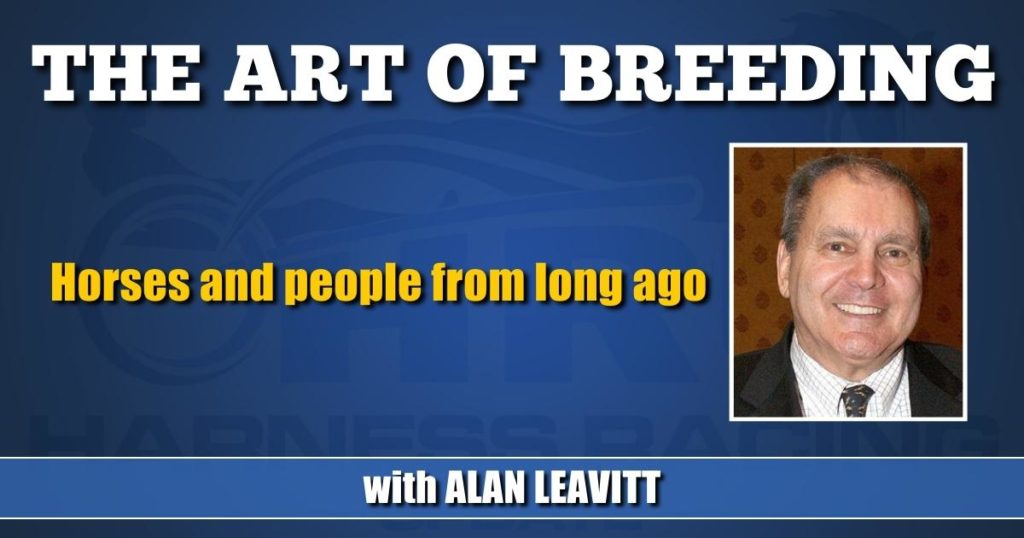 Horses and people from long ago

Just the mention of a horse’s name is enough to send this kid compulsively running its five generation pedigree on Pathway. Which is how I came to be studying the five generations of a trotting filly with the intriguing name of Samosa.

The only semi-close cross in her background is her 3 by 4 link to Garland Lobell. And how Garland Lobell came to be is a story unto itself.

In 1981, Jim Harrison was running Lana Lobell for me. Our two top trotting sires were Speedy Crown, probably, overall, the best trotting sire who ever lived, and his great son, Speedy Somolli, a Hambletonian winner himself who sired three winners of the Big Dance.

I happened to get a call from a very persuasive horseman from Illinois, whose name is lost, at least to me, in time. He told me he had a 4-year-old horse by Speedy Crown who was about to beat 1:58 next week at The Red Mile. And being the generous fella that he was, he’d let me have his colt’s full sister, a 3-year-old, for the bargain price of $20,000.

So, like a trout going for a dry fly cast by Brad Pitt, I snapped her up. To the chagrin, to understate it, of Jim Harrison.

“What the hell am I supposed to do with a mare by Speedy Crown when we’re not only standing him but his son, Speedy Somolli?” Jim said.

Plus a few other things that didn’t reflect well on my intellect. Jim did not subscribe to the current belief that one should never say anything that might cause the hearer pain or embarrassment. In his defense, three years as a tail gunner in a Marauder bomber could give a man a more realistic view of life than those lucky enough not to have helped fight the Second World War.

In any case, we also had another trotting stallion in our stud barn who had no Speedy Crown blood, ABC Freight. He was by Noble Victory, and out of A.C.’s Princess, by A.C’s Viking. ABC Freight was the best 2-year-old trotter of his year, winning the only big money stakes for 2-year-old trotters at Roosevelt, and then time trialing in California for Joe O’Brien in 1:57.2.

That shattered the previous world record, which was at least two seconds slower. But although he still could show blinding speed on those nights when the stars were properly aligned, he never came back to his earlier glory at 3 or 4. He finally wound up in the stud at Lana Lobell, on a lease deal, where he never got the popular support any stud needs at least a little of if he’s to succeed.

But ABC Freight did get a few of our mares, and one of them was Gamin Lobell, my Speedy Crown purchase that, like the legendary Hot Rod Lincoln, almost “drove Jim to drinkin.’” Little did we know that the result of that breeding would change the course of the American trotting breed forever.

On a different note, the Lexington Junior League Horse Show is going on this week at the neighboring Kentucky Horse Park. I’ve gone over and watched a few classes, mainly to watch my wonderful new partner in two baby trotters who also shows a great string of saddle horses.

Looking back more than 60 years, it’s hard to remember how caught up I was at the time in the show horse world. My idol at the time was Earl Teater, the trainer for Dodge Stables, the nom de exposition of Francis Dodge Van Lennep, also the owner of Castleton Farm.

As I got a little older and actually competed against Teater, I earned the right to hang around the little group of horsemen who always surrounded him. I hung on every word out of his lips, and they were so indelibly etched into my memory that I still can call them up.

The first memorable quotation I didn’t actually hear, but I know that he said it. This was in 1947, after the gaited stake at Madison Square Garden, where Frank Bradshaw, on Easter Parade, defeated Teater’s Wing Commander, for the second and last time Wing was beaten in an eight-year campaign.

After the class, Bradshaw, a true gentleman, came up to Teater, extended his hand, and said: “No hard feelings, I hope, Earl.”

Teater shook his hand, and said: “No hard feelings, Frank, You got the ribbon and I got the champion.”

Later, when I attained listening status, I heard his answer to the question of whether it was really thrilling to show his world champion three gaited mare, Meadow Princess;

“About as exciting as kissing your sister.”

But as the years passed and the horse shows were behind me, I’d still stop at the Castleton Saddle Horse barn whenever I was in Lexington. One time I mentioned that we had a close call with a ship-in mare that we caught in time that had Strangles.

“When I was on that job in Tennessee,” Teater said, “One year we had strangles so bad I couldn’t eat white gravy for two years from all the throats I lanced.”

The most vivid picture of the true horse business you’ll ever hear.

But the one that has stuck to me the most is from when I made the mistake of asking him how old his champion mare Bell of the Dell was?

“Old enough to sleep by herself,” he shot back, and I’ll stand by a slightly altered version of that answer whenever anyone wants to know how old I am.