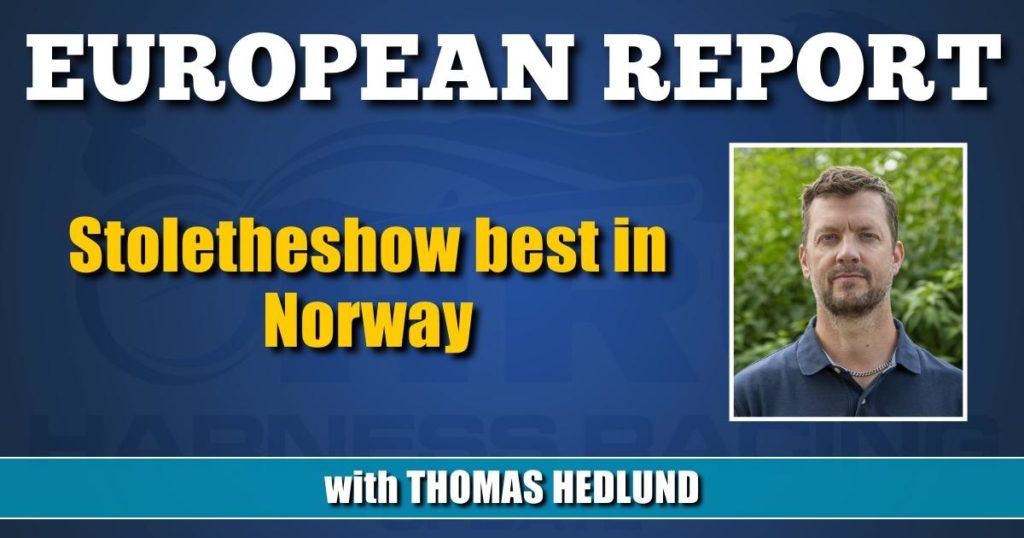 Hamre sat in the bike behind his Dream Vacation son and as in the Oslo Grand Prix, success was earned by a trip in front where Hamre could control his opponents all the way.

Stoletheshow is definitely the top trotter among the older horses in Norway at this moment and he continues to show that he is hard to beat when racing in front.

However, there was excitement in the race when Officer Stephen became a serious threat attacking on the leader’s outside during the race’s last half kilometer. In fact, Officer Stephen even got some meters advantage at the top of the stretch and it seemed like Stoletheshow was beaten, but Hamre acted in the bike and Stoletheshow showed great moral to come back on the inside and win easily in a mile rate of 1:53.4.

Stoletheshow was successful as a 3-year-old in Norway. Under Marcus Lindgren’s training, he won the Norwegian Kriterium, the biggest race for 3-year-olds and now, as a 7-year-old, the horse has shaped up to be a top trotter among older trotters in Europe.

Philippe Allaire-trained Hohneck (Royal Dream) has been one of the most successful horses in the French ”H-crop” of 5-year-olds, and when the $100,000 Prix de la Communate de Communes Thierache Centre was held in La Capelle in northern France on Sunday (July 10) afternoon, Hohneck was outstanding from the lead.

Older trotters gathered in La Capelle and when Hohneck hit the lead paired with Francois Lagadeuc, the race was over. The Royal Dream son left the opponents over the home stretch and Philippe Allaire’s trotter hit the wire in 1:54.4 over the mile.