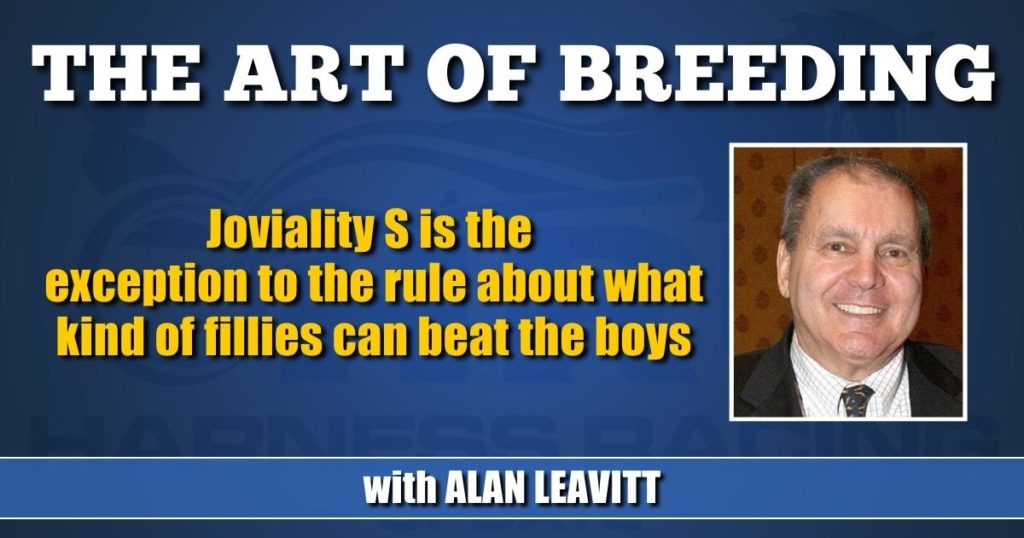 Until I was able to ask a few questions of Marcus Melander, the trainer of Joviality S, I was prepared to advance the thesis that it was only big, stout, masculine-looking fillies that could hold their own against the colts. But that went by the boards when Marcus told me that his filly was on the small side, and quite feminine.

So that leaves me with no explanation for why, only very occasionally, we have a trotting filly who can whip the trotting colts.

In this kid’s defense, during Deweycheatumnhowe’s racing days all of us who owned him felt blessed that he never had to face Snow White at 2. She was probably two seconds faster than our colt.

However, Snow White didn’t come back at 3, and then, when she was tried as a broodmare, it was discovered that her chromosomes were somehow messed up, and she was technically a male.

But Joviality is all girl, and yet she will go to the Hambo as the betting favorite.

This whole Joviality caper did direct my attention to her trainer, Melander, a 30 year-old Swede. It’s a rule of thumb that no trainer is any better than the horses he has to work with, but Melander has already had more top horses than some trainers have in a life-time. They include Greenshoe, Gimpanzee, and now, Joviality S.

(The genesis of the expression “Rule of Thumb” is the ancient British law forbidding a husband from beating his wife with a rod wider than his thumb. One does not believe that that law is still enforced in England.)

No matter how patriotic, or chauvinistic, one is, it’s an undeniable fact that transplanted Scandinavians are dominating the American trotting scene.

The only Scandinavian trainer I was ever close to was Per Henriksen, when we both were training stables at the same little training center in New Jersey. Henriksen had a lot bigger stable than I did, and he developed two top trotting colts the same year, one of them was the Hambletonian winner Nuclear Kosmos.

There was a story with his win, because Henriksen got Ulf Thoresen to fly over to drive in this Hambletonian. Bea Farber — one of my dearest friends and herself a great driver — had competed against Thoresen in an international driving competition. She told me that Ulf Thoresen was the best driver she ever saw, and she knew about him first hand from competing with him.

Here, a quick digression about a continuing injustice. Farber proved to the world that a woman could be just as good a driver as any man, and better than 99 per cent of them. Yet she has never been elected to the Hall of Fame. There finally are a few women there, but not Farber, who really was the Queen Bea, and she belongs there, too. Anybody who has any doubts about whether misogyny is alive and well in our sport need look no further than her exclusion from the Hall of Fame.

Back to the Scandinavian trainers. I learned 36 years ago from Henriksen how important a straight track was as a training tool. Now they’re greatly improved, with the name Euro Strip, but the primitive one Henriksen used was good enough to produce a Hambletonian winner.

The best of all the Scandinavian trainers, in my humble opinion, is Jimmy Takter. He not only trained, and drove, a Hambletonian winner, he also developed a pacer who won the Little Brown Jug. My friendship with Takter goes back more than 30 years to the days when he and Per Eriksson would drive up to look at the Lana Lobell yearlings, and then stay and join me for lunch. Those were wonderful days for me. I hope they remember them the same way.

Now on to a touchy subject. I love being in the Red Mile stable area on the mornings that there’s stakes racing at some other track, maybe Oak Grove, or even Scioto or Hoosier. The other morning I had to wait my turn to drive in through the stable gate while two beautiful big trailers were pulling out, on their way to the races at Oak Grove.

When you’re in the barn early on those mornings, the excitement is palpable as the bikes are loaded on top, then the harness bags in the front, and finally the horses are carefully walked up the ramp and into their stalls.

And this leaves me with a question, which up till now I have never heard answered. It would be wonderful for the horse industry, not only in Kentucky, but in the larger sense, if the Red Mile would stay open year-round. I should quickly add that I mean stay open on a basis that not only would all expenses be covered, but a profit be turned for the track ownership.

When I say all expenses covered, I only leave out depreciation, because that will continue whether the plant is open or closed.

On the basis I’ve proposed, my question is; Why shouldn’t the Red Mile stay open year round?

I can’t come up with a single reason. If there is one, I wish someone would tell me what it is.