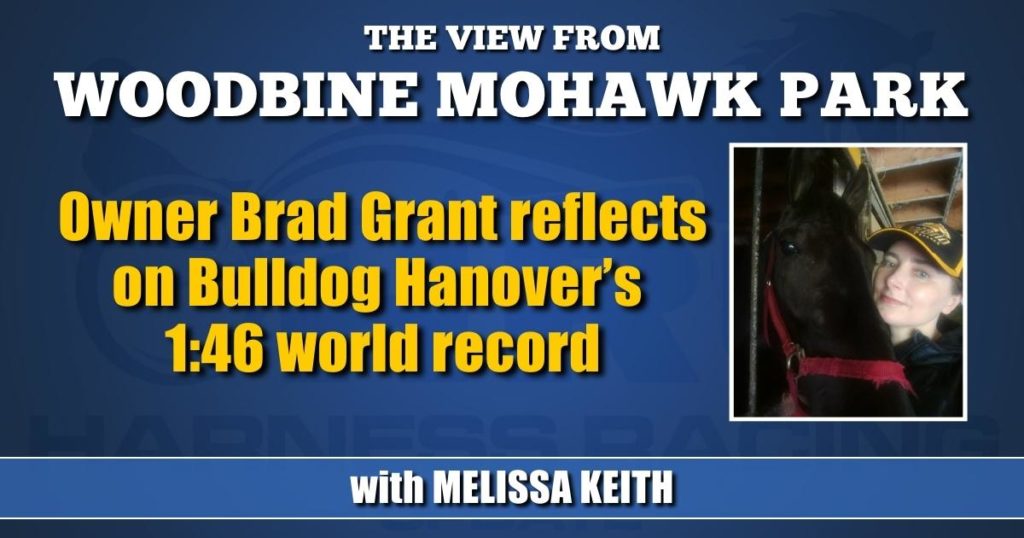 The Jack Darling trainee joins Always B Miki and Lather Up as the fastest horses in harness racing history.

After the smoke cleared last weekend at The Meadowlands, the sport’s third 1:46 pacer took his place in the record books, alongside world champions Always B Miki and Lather Up. In the second division of Saturday’s $99,500 Roll With Joe Open Pace, Allywag Hanover (Todd McCarthy) was first off the gate, with 1-5 favorite Bulldog Hanover (Dexter Dunn) in hot pursuit to the :26.2 opening quarter, then gliding past at the :53.4 half. When first-over Abuckabett Hanover (Tim Tetrick) loomed a closer third near three-quarters, Bulldog Hanover shifted into another gear, confidently holding off Allywag with a :25.3 last panel.

Every horse in the field of seven paced home in :26 or faster, which makes Bulldog Hanover’s world record somewhat different from those of Always B Miki (in the 2016 Allerage Farm Open at Red Mile) and Lather Up (in the 2019 Dennis Drazin Graduate Series Final at The Meadowlands). Only Backstreet Shadow (third to Lather Up) closed in sub-:26 style in either of the other two world champion’s record miles, while Bulldog Hanover (Shadow Play–BJ’s Squall) outsprinted a wall of late speed.

Bulldog Hanover’s part-owner Brad Grant was not at The Meadowlands for his stallion’s fourth-consecutive victory.

“I was watching it from home,” the Milton, ON resident said. “I thought he had a good shot of winning the race, but I didn’t think he had a 1:46 in him. When they hit the three-quarter pole and they were still going at it, the way the horses had been coming home all night… I think about halfway down the lane, I was wishing I could’ve seen the teletimer, because I figured it was getting close.”

Although Noel Daley handles training duties south of the border, “It’s really Jack Darling and his people that put this horse together and made him the horse he is,” said Grant. “Jack was good enough to let me get on the wagon and be part of it. I’m just a cheerleader – the credit needs to go to other people.” Grant joined Cambridge, ON-based Darling as co-owner prior to Bulldog Hanover’s 3-year-old season, in which the colt won 10 of 15 starts, including three Ontario Sires Stakes Gold legs, a Somebeachsomewhere division, and his North America Cup elimination at home track Woodbine Mohawk Park.

“I’ve done business with Jack in the past and I had watched [Bulldog Hanover] as a 2-year-old. We tell the story that I gave Jack a call and said if there were any interests [available], I’d be interested. Five minutes later, we had a deal done. That’s just the way Jack and I both work, on a handshake and a verbal [agreement]. That was it, and since then it’s been a lot of fun.

“I bought horses from Jack in the past and had some real good luck. They come from a good barn, good quality racehorses.”

The high-speed Ontario-sired son is Canada’s fastest-ever older stallion on a half-mile track, having won a May 15 elimination for Flamboro Downs’ Charles Juravinski Memorial Cup in 1:49.3h.

Bulldog Hanover was “very well received” in his first season standing stud at Seelster Farms in Lucan, ON, which overlapped with his 4-year-old racing campaign.

“Jack and I believe that he didn’t get enough credit [in 2021], and probably that’s one of the reasons both he and I believed he would be a great older horse,” said Grant. “It was Jack that came forward with the idea that we look at breeding him…The horse only goes about 10 minutes up the road to the clinic [to be collected]. He does his thing and comes back. He goes about his business. He’s a professional, on the track, in the barn, and in the breeding shed.”

Grant said he considered the stallion’s 2021 North America Cup elimination to be his best performance.

“After that race, I truly believed we had the winner of the North America Cup. And I don’t usually go into a race overconfident, but I might have, on that one.”

But when some top sophomore pacers’ careers were winding down, Darling and Grant’s colt was only getting started.

“He raced late in the fall at Hoosier and he went in :48 in the mud [winning a division of the Circle City on Oct. 29]. After the race, Ron Burke texted me and he said: ‘Great mile on a good track. He’s a 1:46 horse.’ I just thought, ‘Well, that’s pretty fast. And when the horse crossed the wire the other night, I turned to my wife and said, ‘Remember that text from Ron, when he said if that had been a [fast] track, he’d have gone in 1:46? Maybe he saw something we didn’t.’ To do it last Saturday night, one of the first things that went through my mind was his message to me when he won that stake race in the mud.”

There is only one Canadian mile among current major world records – it’s Dr J Hanover’s 1:46.4s mark for 4-year-old geldings, set in a Graduate Series leg on June 3, 2017 at Mohawk. Grant also shared ownership of that world champion, witnessing his record mile in person.

“Just luckily enough, I was there that night,” he said. “Coming off the turn they were flying, and coming down the lane they were flying. I was kind of watching the teletimer and watching the race. I thought he was going to hit around 1:47. That was just an exciting, exciting race. [Trainer] Tony [Alagna] believed that the horse had more speed in him than he had ever shown. He showed it that day.”

“I think he was a half-mile specialist. I got him a little later in life, but you know, Tony always felt that in his day, he was probably one of the best half-milers,” said Grant. The Somebeachsomewhere–So Perfect gelding’s fastest victory on a half was a 1:51.1h win at Yonkers, two years after taking his Mohawk mark, but he enjoyed success in three legs of the 2018 George Morton Levy Series, finishing fifth in the final.

In 2019, “the partners and I all agreed it was time to retire him. [Trainer] Tony’s mom [Donna Lee] has him as a riding horse. Donna loved the horse all the way along, so it was a perfect fit.”

“I think it will. We have to keep in mind, the horses are getting faster. They’re elite athletes – they’re not just horses. Under the right conditions, you know, Dr J’s record will be broken. There’s no doubt about it. Hopefully by Bulldog Hanover. Records are made to be broken. Some of them aren’t, but for the most part, the way the tracks are being looked after, and the way the horses are being looked after, breeding for speed and everything else, it’s gonna come.”

That doesn’t mean it will be easy.

“Everything has to be perfect,” Grant said. “When [tracks] get the big races going, they may tend to pay a little more attention or give a little more TLC to the track [surface]. If the weather’s right, the temperature’s right… everything. Look at the miles on Saturday night [at The Meadowlands], Rockyroad Hanover, :46.2. I owned him at one time too. It was just a perfect night for racing.”

Bulldog Hanover is the current big dog in his division, with the $250,000 final of the Graduate Series next on the dance card.

“As long as the horse is healthy and able to compete, then I think you’ll see him in all the big races this year,” said Grant. “He’s got the Graduate final this weekend [July 9 at The Meadowlands], and then he’s got the William Haughton [Memorial],” July 16 at The Meadowlands. At Woodbine Mohawk Park this October, it all comes down to the 2022 Breeders Crown for the Bulldog. It’s always nice to win it on home turf – it just seems to be tougher.”

While many in the industry consider earnings the better measure of a horse than a fast mark, world records still have meaning, even in the era of abundant speed. What does a 1:46 flat mile mean today, to Grant?

“It means you’ve got a damn good racehorse!”