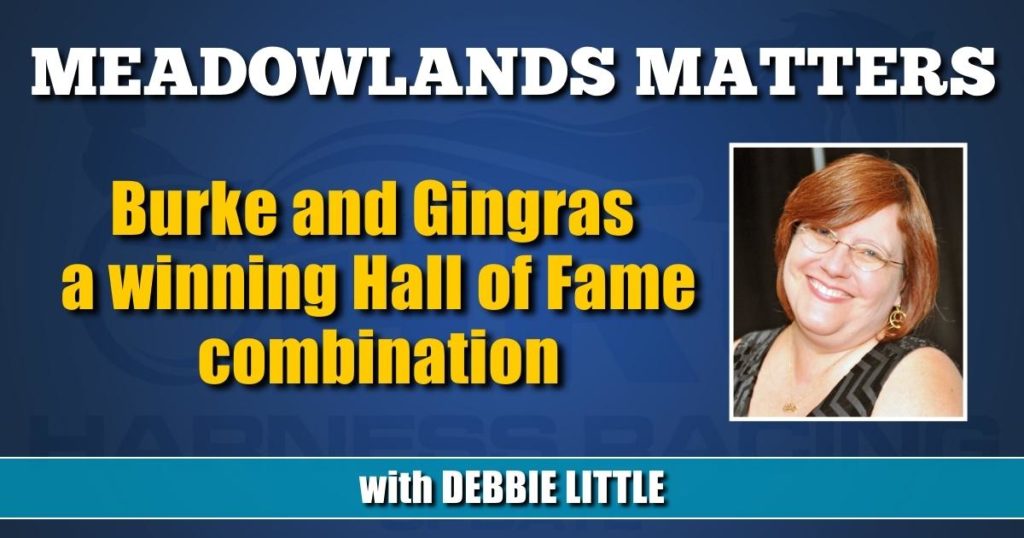 BURKE and GINGRAS a winning Hall of Fame combination

Fittingly, the trainer and driver will both be inducted into tonight’s harness racing’s Living Hall of Fame class of 2022, along with George Teague, Jr. and Chris Boring.

Approaching their Hall of Fame induction, trainer Ron Burke and driver Yannick Gingras shared thoughts about themselves and each other.

How do they feel about being inducted, let alone together?

“I’m thrilled, honestly,” said Burke. “As it gets closer, actually, I think I’m even more happy about it than I thought I would be. Honestly, it would have been more special to go in with my father, because I feel he’s worthy, but right behind it would be Yannick.”

“Obviously, it feels great,” said Gingras. “Growing up it’s not something I really thought about, especially being from Canada. I feel I’m not done but it’s great being recognized by other people that I’ve had a good career so far.

“[Ronnie] has been tremendous for me on so many different levels, not just giving me great horses to drive. There are so many other things as well. And to go in at the same time as him definitely makes it extra special.”

“He talks a lot,” Burke said of Gingras. “You know, it’s probably the same with me. We probably have a lot of talking, not a lot of listening, going on with us.”

“What sticks out in my mind with him is how easy going he is to drive for,” Gingras said of Burke. “He never calls. He never tells me how to drive. Never bitches after a race. It makes my job so much easier. I don’t tell him how to train, he doesn’t tell me how to drive. He’s just tremendous to work for.”

Each other’s best qualities as individuals and as horsemen?

“He’s an understanding person and he’s loyal to my family and to Foiled [Again] and he tries to do the right thing,” Burke said of Gingras. “And sometimes, he f – – – – up, and he’ll admit he does, too, and I’m the same.

“As a driver, he enforces his will on other drivers. He makes people do things they don’t want to do. At one point, I thought it was his ability to make horses go fast. I think that’s been surpassed, he’s now more of a thinking man’s driver, than even he is at making hard speed. He can still make speed, obviously, but he has become much more about strategy and putting people in wrong positions.”

“He’s a great horseman,” Gingras said of Burke. “He brings horses back year after year after year after year. The way he does things it’s unreal really. Foiled Again is one example. And it’s obviously not easy but Foiled’s not the exception, he’s kind of the rule. Because he’s got so many other ones that are just like that: Atlanta, This Is The Plan, Maltese Artist, Won The West. It just speaks volumes on how he does things and the program that he has.

“As far as a person, he’s a family guy and I think that’s part of the reason why we get along so well because he understands that I want to have a family life as well. Of course, driving great horses for him is important, but he understands that I want to spend time with my kids, that I want to see them grow up. I can take a week off and I come back and I’m listed on all of the horses the following week and it’s something I can never thank him enough for because no other trainer would do that, realistically.”

“It was 2012 and it’s the only time that (Burke) has ever called me after a race,” said Gingras. “I won the Canadian Pacing Derby with Foiled Again. He wasn’t super sharp at the time. I got away like seventh or eighth with him, went through the inside, squeezed through traffic at the top of the stretch and just got up near the wire to win the race. He left me a message, I’m guessing, just as I crossed the wire. And I still have that same message saved on my phone. I could hear in his voice that he was a little emotional and that meant a lot to me.”

“Last year, we were boating in Florida by the training center and probably had too much to drink and Yannick dove out of the boat to grab an alligator,” said Burke. “And I was like, ‘This simple idiot,’ and I had to grab him and yank him back into the boat while he was trying to swim after an alligator. I thought, ‘What are you doing?’ The next day we were talking and I go, ‘Do you remember jumping in after the alligator?’ He goes, ‘Yeah. Thank God we were not the driver of the boat.’”

BEING ON TOP AGAIN AT THE MEADOWLANDS THIS SEASON?

“Me and Yannick consider that our track so obviously we want to do well there,” said Burke. “When Jeff [Gural] writes those letters bitching at everybody he should put at the bottom, this doesn’t apply to Ronnie and Yannick, they participate at all times.”

“For me, I want them to think (Gingras) did it the way he thought it should be done and did well doing it,” said Burke. “I didn’t go everybody else’s way. My barn is obviously not patterned on anybody else’s. Obviously, we did it differently.

“For Yannick, I think he’d want people to recognize that he became a great big-race driver. When his career is over, then hopefully he would have won them all, and people will say that guy was money in big races. I think there’s more to come with this kid yet. He’s a young 43 because he didn’t start like the other guys at 18 and 19 on the Grand Circuit. We still see improvement there with him. I feel like this year more than ever I’ve seen him be more patient with babies. Yannick’s still going to get better.”

“Obviously, I want people to see that we had tremendous careers,” said Gingras. “But also, that we were consistent year after year we did our things. I’m loyal to him and he’s loyal to me and I wouldn’t want to do it any different. I wouldn’t want to be driving for 25 different barns. And the honesty is part of the reason I think both of us get along so well.”

“He’s a tremendous guy,” Gingras said of Burke. “To me, the most important part, like I said earlier, is the family part of it. It’s not just him, it’s his whole family. It’s his dad, his mom, his sister, his brother, the Burke Brigade and I’m just so happy to be part of it. I’m just a small part, but I feel like they’re family to me, too.”

“We’ve been friends for a long time and it’s not always easy,” said Burke. “You know, sometimes he has to pick [other] horses or we have to change drivers and neither of us like being second choice ever.

“The best part is when the other one was wrong, we don’t throw it in their face. It’s been good for me because with him being 10 years younger, by the time he’s ready to quit, I’ll at least be ready to slow down.”