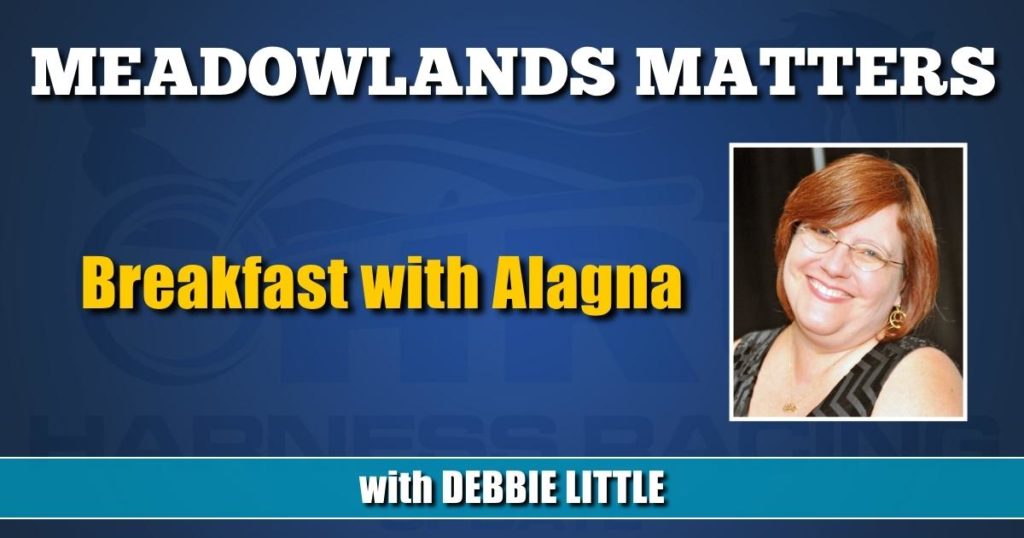 The “Alagna Armada” was locked and loaded for “Breakfast With The Babies” on Saturday, June 25 at The Meadowlands.

Trainer Tony Alagna’s pupils participated in 12 of the 14 baby races, but with 24 competing, how did Alagna get not one, but two, races off?

“They wanted me to get something to drink and stay hydrated,” said Alagna with a laugh.

Anyone who’s followed these freshmen events this month, knows that Alagna has averaged 22 starters during the three weeks he’s competed, so this is nothing new to the staff of 18 he had with him that day.

“My crew is very efficient,” said Alagna. “They get it done. A couple of weeks ago we brought 31 up here and it went without a hitch.”

In addition to 23 babies, on June 11, Alagna’s well-oiled machine also had eight horses competing in four races for 3-year-olds and up.

Last Saturday, more than a third of Alagna’s 65 babies were on display, and even though education is more important than winning, some happily did both that morning.

“We’re just trying to see where they’re at fitness-wise, manner-wise and everything else,” said Alagna. “We’re not out to win baby races just to say we won it, so as long as the horse performs, that’s what we’re looking for.”

In more than half the races, Alagna had multiple starters, which, although not being a perfect scenario, was a better choice than racing elsewhere.

Racing so many requires a lot of planning because no matter what you do, one go-to driver can still only drive one horse.

“In one race, Andy [McCarthy] had a bunch and they were all mine, so I put Dexter [Dunn] and Todd [McCarthy] down because I use them quite a bit as well,” said Alagna.

However, Alagna will use other drivers, especially if he has a horse that he thinks specifically fits someone. There was such a situation when he put Scott Zeron down on 2-year-old pacing filly Bankers Luck.

“And he’s done a great job with her,” said Alagna. “She’s two-for-two in baby races.”

In 39 babies races this season, Alagna has won 17 times, including a few that were featured on “What’s Otten Spottin’?” a new segment this year hosted by Meadowlands’ social media supervisor, marketing coordinator and TV talent, Jessica Otten.

“I look for something that catches my eye,” said Otten. “If they come good back halves or good last quarters. Famous siblings, big prices, first crops. Anything to make it interesting.”

Three of the four winners showcased by Otten last week were Alagna trainees, including the aforementioned Bankers Luck.

As nice as it is to win and do so in a good time, it’s not what’s most important in a baby race to Alagna.

“I’ve had fillies come up here and the first week they went in 2:02 and I was tickled to death, even though we trained them much faster than that at home,” said Alagna. “It’s all about mannering. Getting behind the gate. It’s a whole different adrenaline rush for them coming up here.”

Alagna wasn’t the only one enjoying their Saturday morning at The Meadowlands.

Patrick Ryder was in colors and ready to drive just in case his dad, trainer Chris Ryder, needed him to go with anything.

Patrick, 27, was obviously still elated from finishing third at The Meadowlands the night before with Lisa Lane, a 2-year-old pacing filly trained by his dad, that they co-own.

It was Patrick’s first official drive at The Meadowlands, even though he had driven his filly twice in baby races.

“She always felt good in the baby races and she never really opened up,” said Patrick. “Racing her last night, she opened up and gave us even more than we expected. She had the nine-hole so we were thrilled with [finishing third].”

Alan and Ronald Katz of the 3 Brothers Stable were there to watch their 2-year-old pacing colt Tickertape Hanover.

“We enjoy the babies,” said Alan. “The excitement. Dreaming. He did good two weeks ago so we’re hopeful.”

The son of Huntsville finished third that day.

“The dream starts when the purchase is made,” said Fred Wallace, co-owner of 2-year-old pacing filly Cultured, who was racing that day.

“Her qualifier last week was unbelievable,” said Harvey Nagler, who co-owns the filly with Wallace.

“I thought, let me see for myself,” said Wallace, who drove over from Manhattan.

The partners’ presence was rewarded as the daughter of Captaintreacherous won her second straight baby race.