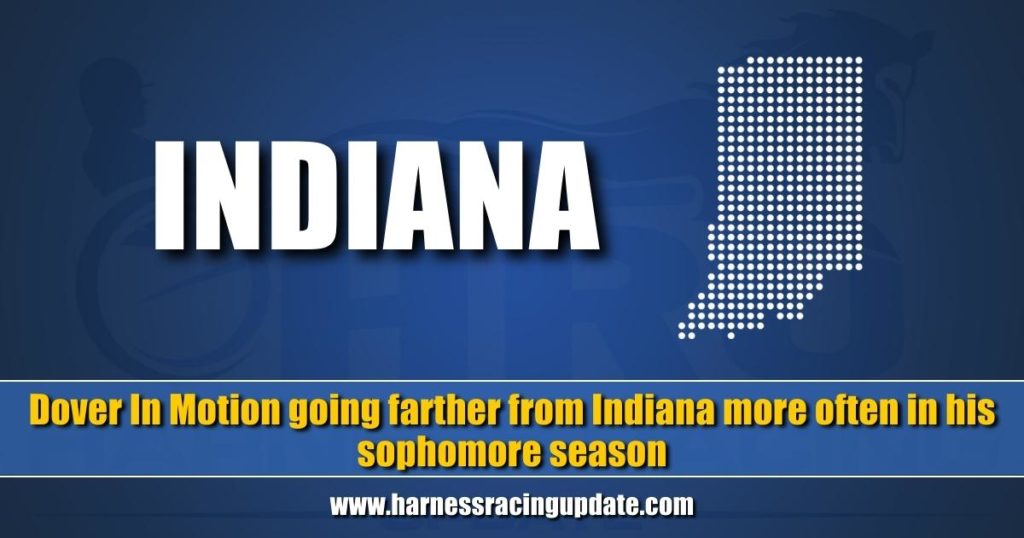 The first leg of Indiana Sires Stakes competition for sophomore trotters and pacers was contested during a special Memorial Day card Monday, May 30 at Harrah’s Hoosier Park Racing & Casino. Over the course of 10 divisions, favorites claimed victory in all but one race. Dover In Motion, last year’s freshman trotting colt champion, produced the most dominating performance, winning his $50,000 division by more than five lengths for driver Ricky Macomber Jr., trotting a 1:52.4 mile in his sophomore debut.

“I told Ricky after he warmed up, ‘He’s really good. I expect a new lifetime mark tonight,’” trainer Jamie Macomber said of her charge. “I expected him to be very full of himself and confident in himself. When it came up in (1):52 with the earplugs in and Ricky shutting him down, that was impressive. You just can’t wait to go tell the horse thank you and good job.”

Since Dover In Motion first stepped on the racetrack in 2021, the son of Dover Dan—Keystone Sadie has proven nearly flawless. At 2, the gelding produced an unblemished record over the Hoosier Park oval. He prevailed in each of his eight Indiana starts, including victories in each of six Indiana Sires Stakes legs before capturing the $270,000 Super Final. That night he established a new speed record for 2-year-old gelding trotters at the track with a 1:53.2 mark.

His only defeat last year came when owners M&M Racing and Norbert Maza took a chance and entered Dover In Motion in the Mohawk Million, where he raced sixth while battling sickness.

“I think everything played out that he was 2 and it was his first time shipping. He was sick. We got stuck at the border for a while. I don’t know that there was that much to learn other than it was a bad experience for him. Just a baby trotter shipping for the first time,” Macomber recalls of the trip north of the border.

Dover In Motion finished the season with $309,400 on his card and divisional honors in Indiana. In turn, the partnership rewarded Macomber for the special season. She was given a 10-per cent interest in the trotter, no questions asked.

“Isn’t that awesome? There was no conversation. They just said we are giving you 10 per cent,” Macomber said. “Shocked. Speechless. You have a horse that just made $300,000 and they say you now own 10 per cent. Thank you is not enough.”

The trotter was turned out at the farm of Ora Miller, one of Dover In Motion’s partners, in northern Indiana after the season. When he returned to Macomber’s barn at Hoosier Park to begin preparations for the 2022 campaign, the conditioner was pleased with what she saw in the champion.

“He came in and his chest was so much bigger and his butt was so much bigger. I was so happy to see how well he wintered in the field,” she said. “As soon as he hit the track, it was never enough work to make him happy. Every day. You start slow miles and build up. He was just shaking his head, saying ‘Come on, let’s keep going!’”

If there was a challenge for Macomber this spring, it was that her pupil came along so quickly and with such ease, she had to work to keep him happy as she mapped out a schedule to his first start on Memorial Day.

“When he started training, he always wanted to go faster or go more. It was so awesome to see that he came back with the same attitude that he left with last year. His work ethic is amazing,” the trainer said. “I had him ready way early. I had to qualify him because he was so mad at me for continuing to shut him down training. Then I turned him out for two weeks after I qualified the first time because my only option at Hoosier Park was the open.”

Last year the connections took a conservative approach with the gelding, opting to race him outside Indiana only once. When it came time to stake Dover In Motion this year, the idea was the same: focus on Indiana Sires Stakes and Hoosier Park open stakes and take a few select shots on the Grand Circuit. The sophomore’s dance card includes the Yonkers Trot, where he was supplemented for $6,000, Stanley Dancer Memorial, W. N. Reynolds Memorial and Earl Beal Jr. Memorial.

“Ora and I both agreed to write down what we wanted and then we went over it and we made adjustments. I didn’t have the Yonkers Trot on my sheet, but he really wanted to try it,” offered Macomber. “We both agreed on a light staking schedule this year in hopes of keeping him forever and having a good racehorse when we’re done with his stakes season.”

After his impressive Memorial Day performance, Dover In Motion will compete in the second leg of Indiana Sires Stakes action Wednesday, June 15. Then he ships to the East Coast where eliminations, if necessary, will be held for the Yonkers Trot June 24, with the final slated for July 1. The Reynolds, also held July 1 at the Meadowlands, is Plan B should the gelding not make the final. The Stanley Dancer Memorial is two weeks later.

Around the barn, Dover In Motion is entertaining, making each day an event. The conditioner admits he is very similar to Beckhams Z Tam, whom she previously trained and sent out to victory in the $527,500 Breeders Crown final for sophomore pacing colts in 2017.

“As personalities go, they’re the same. They know when to rest, they play all day. They both have their head out over the gate all morning. ‘Come pet me, come play with me. Let me bite your shoulder. Let me lick your jog cart.’ As soon as the barn work is done, the lights are off, and their lunch is complete, they just go to sleep,” she said. “The horse makes me happy every time he steps on the track. I’m so lucky to have one of the best Indiana breds in the state.”