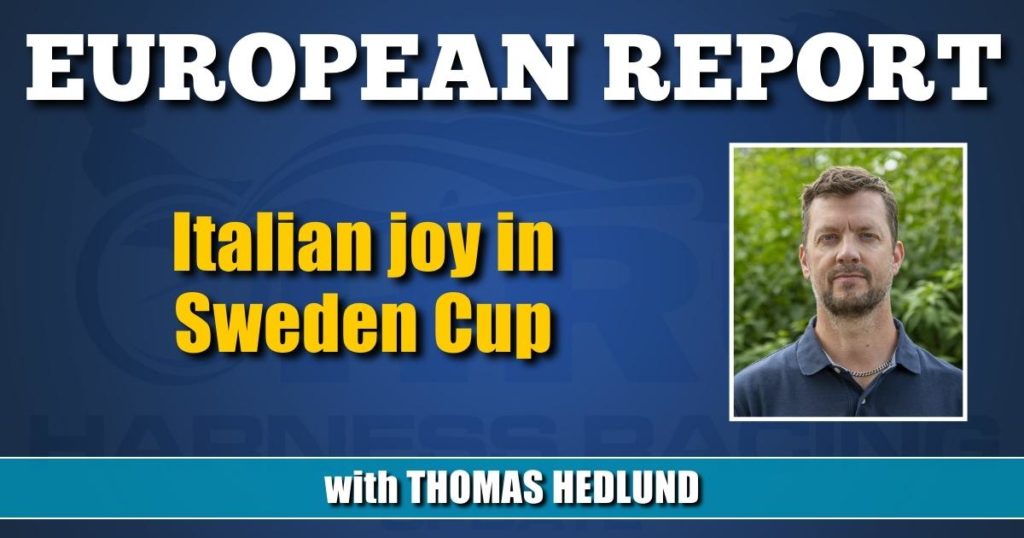 Alessandro Gocciadoro dominated Saturday’s (May 28) $125,000 Sweden Cup at Solvalla and after an impressive wire-to-wire win in the elimination, Gocciadoro drew number 1 in the final, which was important since the other two elimination winners are well-known quick starters.

Officer Stephen (Pastor Stephen) and trainer Dion Tesselaar played with the opponents from the lead in the first heat, while Usain Töll (Googoo Gaagaa) used the same recipe in the third elimination.

But when Gocciadoro was the lucky guy in the draw ahead of the final and got post 1 with Bepi Bi (Donato Hanover), pretty much the race’s outcome was determined. Bepi Bi managed to defend himself against outside trotter Officer Stephen when the car accelerated at the back stretch and when Gocciadoro was allowed to keep the pace at an unusually low level, Bepi Bi was outstanding in the pouring rain at Solvalla.

NBA star Nikola Djokic entered the winner’s circle together with Bepi Bi’s entourage after the comfortable elimination win and the double MVP also showed up in a warm up heat at Solvalla, driving one of Gocciadoro’s horses racing on Saturday’s race card.

Bepi Bi came home in a moderate 1:55.1 mile, but the track got sloppy on Saturday afternoon, due to the heavy raining.

Officer Stephen followed as runner up ahead of strong finisher Milliondollarrhyme.

The 3,140-metre, $205,000 Harper Hanover’s race is traditionally one of the last races on Solvalla’s Saturday card on Elitloppet weekend and this year, a French super horse added pizzazz to the event. Prix de Paris winner Diable de Vauvert, driven by Gabriele Gelormini started 40 meters behind the front horses and with a little more than lap to go, Gelormini left his position in ninth over.

Usually, ninth over is an impossible position to have with a kilometer to go, even in a race over 1.9 miles at Solvalla, but when Gelormini gave Diable de Vauvert the order to attack four wide at the back stretch, the duo quickly closed in on the leading horses.

Diable de Vauvert finished as he’s used to, strongly, and Gabriele Gelormini’s leg went up in a celebration of joy as his horse hit the wire as winner in a mile rate of 1:56.3 over 1.9 miles.

Diable de Vauvert was the big attraction on Solvalla’s Saturday race card and horses bred outside of Sweden dominated strongly this rainy day in Stockholm.

Vincennes, Paris, was in focus on Friday (May 27) night when two races with group-status was on the menu. In the $95,000 Prix du Crepuscule, Fabrice Souloy trained Ampia Mede Sm (Ganymede) impressed, winning after a first over trip for driver Franck Nivard.

Ampia Mede Sm and toughest opponent Elie de Beaufour battled for the lead in the first turn and Franck Nivard had to give up the fight when Jean-Michel Bazire pushed Elie de Beaufour hard on the outside. Nivard quickly opted a first over trip with his 6-year-old Italian bred mare and when the field turned for home, Nivard had plenty of power to use in his drive.

In the $75,000 Prix Caecilia for 4-year-olds bred in Europe, upset winner Caio Titus Bond (Varenne) got a calm inside trip, served by Mathieu Mottier and when the door opened for the duo at the top of the stretch, the Italian bred colt could disarm the inside horses just before the wire. Mile rate was 1:58.2 over 1.6 miles and Sébastien Guarato trains the winner.

French media Paris-Turf announced on Friday that Jean-Michel Bazire’s top gelding Cleangame has ended his career due to an injury in a front leg. Cleangame has belonged in the top among French bred trotters for several years, but since he is a gelding, he’s been out of the really big stakes races, such as the Prix d’Amérique, Prix de France and Prix de Paris.