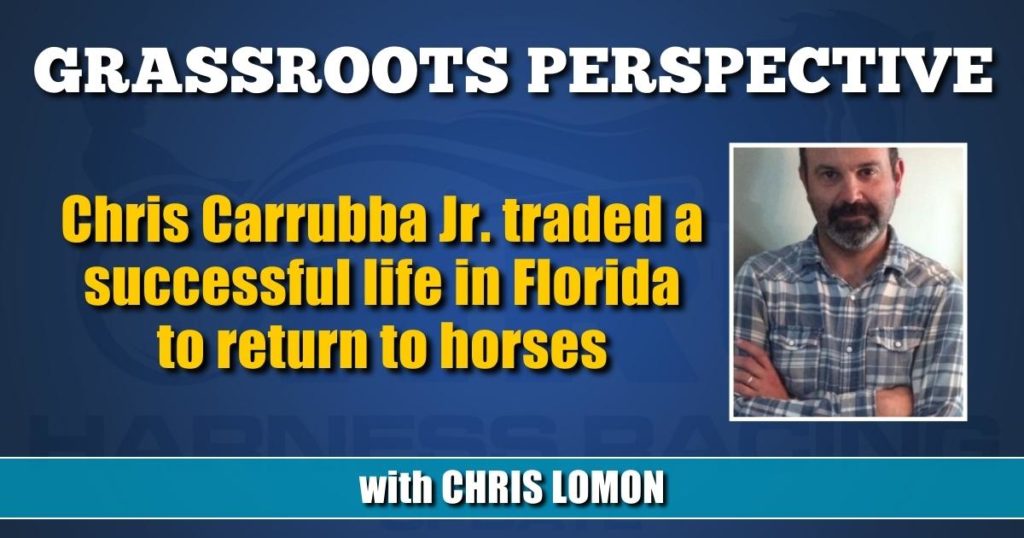 Chris Carrubba Jr. traded a successful life in Florida to return to horses

No matter where he was and whatever he happened to be doing, Chris Carrubba Jr. knew he would one day return to the horse racing world.

As he stood in line at the bank in Florida, looking down at the check in his hands, the horseman-turned-businessman realized what he had always known.

“It was a Friday afternoon and all I remember was saying to myself, ‘I wish I was driving horses tonight.’ It was a good situation, with the jobs I had, the pay was very good, but it wasn’t horses and horse racing. I always knew I’d come back to the horses.”

Born and raised in Batavia, NY, Carrubba, a third-generation horseman, left the standardbred life behind 20 years ago, a decision based solely on money, specifically, the inability to make a decent living in racing.

“I was brought up in the business through my grandfather and father. I started cleaning stalls before I could walk. When I turned 15, I got my fair license and started driving there, and then moved on to the qualifiers from there. Before then, it was a lot of elbow grease, rubbing horses, cleaning stalls – starting from the bottom up. From the first time I jogged a horse, it was game over for me. I knew it was what I wanted to do. When I started qualifying, I got my other license. I knew it was what I wanted to do. My first year, I won some races with my dad’s horses. It was even better because they weren’t expected to win. I caught a little bit of traction catch-driving for some of the guys at Buffalo. But then in 2002, I decided to make the move to Florida.

Having graduated from the University of Miami, where he studied Business Finance, Carrubba soon found a job, a well-paying one, with a different type of horsepower.

“I was watching 20-year-old kids driving around in Ferraris in Florida and I called my dad, who had a barn full of horses, and told him that I wasn’t coming home. I did a ton of real estate, and I was a finance manager at an exotic car dealership. I was there for 15 years.”

His business savvy also enabled him to explore entrepreneurial opportunities, including buying and selling houses.

Whether it was luxury cars or in-demand dwellings, Carrubba reaped the benefits of his hard work.

Yet, in spite of all the advantages he was afforded, there was, at the very core, something missing from his life.

“I came back to racing two years ago. What kept me out was the money. When I got my P license, I started driving, but we didn’t have any casinos. We were driving for $1,200 to 1,800, and when I went to Florida, my first job was as the finance manager at the car dealership. It would have taken me three months or more in racing to make what I was making in one month at the dealership. No matter how much money I made through various avenues – I was able to sell some companies and did well through some other entrepreneurial work – I knew I would come back to the horses. When it’s in your blood, it’s in your blood. When the racinos came in around 2006, I had already been gone for about four years, it was a real eye-opener. I thought, ‘Maybe we can go back and get racehorses again.’ By that time, I was involved in a lot of business and knee-deep in the entrepreneurial world. It wasn’t where I could snap my fingers and go back to racing, but I knew that I wanted to get back to doing what I love.”

The timeline for that return picked up speed after another check was cashed, albeit not by Carrubba on this occasion.

“I can remember that day too. I was flipping properties, renovating them and selling them for a profit, and just before COVID started, I sold all my properties. I had a contractor that was doing some drywall work for me and the job should have been around $1,500. He charged me $3,600. When he handed me that invoice, I said, ‘That’s it. This is my last day of this.’ So, I put all my properties on the market.”

With everything sold, Carrubba then made another purchase.

He was back in the horsepower game.

“I bought a horse, Pet Sur Roc, one week after I sold my last property. I had him at a farm. He had just turned 3. They had just turned him out after his 2-year-old season. I bought him from Brady Galliers, who had trained him down to 2:20 as a 2-year-old. He wasn’t going to make the Ohio Sires Stakes ranks in his first year of racing. I actually paid more than he wanted because he was staked to the Ohio Sires and Buckeye Series. They thought he would be able to come back and have a decent second year, so I offered more than the asking price. With COVID and the impact it had on racing I had more time to train him down. He qualified in July 2020 and I had Sam Schillachi in the bike. He said, ‘He’s green, but how much do you want for him?’ Right then and there I knew I had a horse. Sam told me to take him to the fairs, get him some experience and bring him to the racetrack and I’ll have a nice horse. So, that’s what I did.”

The man with a knack for making smart business decisions had made another one.

Now 5, Pet Sur Roc, a bay son of Pet Rock—Easter Surprize, has carved out a solid career for Carrubba, who handles the reins as trainer and driver.

The two recently teamed up for a neck win on May 11 at Buffalo Raceway, taking home the top prize of $2,750 for the victory.

“It took us a while to get things going. When I took him back to the fairs, he was green and so was I, having been out of the business for an extended period of time. I brought him back and in his first race at Northfield, he got parked the whole mile after getting shut out of the six-hole. At the half, he picked up some cover, tipped himself three-wide at three quarters, and won by 2 ¾-lengths, with Chris Page driving. I knew then that I had a good horse. I was lucky to have him come into my life. We went to a lot of racetracks together. And that’s where that fun with racing returned. Any time you win, it’s always the same feeling.”

Now that he’s back full time in racing, Carrubba has laid out a personal racing roadmap as to where he’d eventually like to find himself.

Spoiler alert: it’s a famous spot in the Garden State.

“Your whole career, growing up in the business, The Meadowlands is the mecca of our industry. Everybody wants to race a horse at The Meadowlands. I was able to take Pet Sur Roc there and he went 1:53.3. I’d really like to end up there one day. I don’t need a 20, 30 or 40-horse barn. If I could have somewhere between eight and 10 at The Meadowlands, that would be my ultimate goal. There’s no feeling you can describe when you walk into the paddock there and see your horse’s name in the program. My five-year goal is to make it there.”

One of Carrubba’s other main priorities is related to family.

“My dad recently had COVID and a few years ago, he had a heart transplant. I haven’t been around as much for holidays and things like that, so now that I am back, I’ve been able to spend time with him. Being back at Buffalo now, it’s been great to have those times with my dad and to be back in a sport I truly enjoy.”