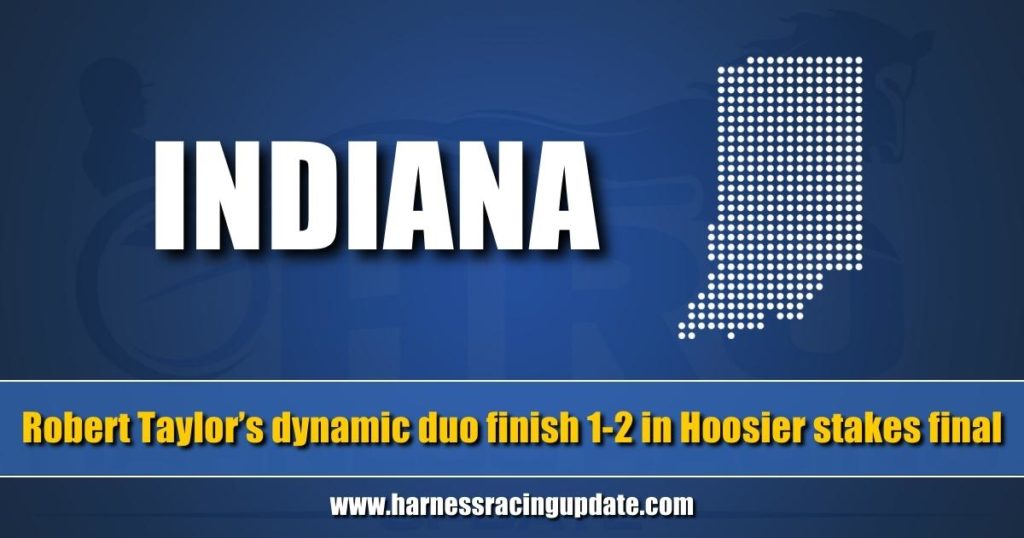 Luv Lorelei and Jusmakinyalook swept the top two spots Friday in the $22,000 Msnaughtybynature series for filly and mare trotters.

The early closing series held each April and May at Harrah’s Hoosier Park Racing & Casino can serve as a good primer for horses set to launch into Indiana Sires Stakes competition. Trainer Robert Taylor has utilized the Msnaughtybynature series to prepare his sophomore filly tandem of Luv Lorelei and Jusmakinyalook, and the pair swept the top two positions Friday night (May 20) in the $22,000 final for filly and mare trotters. Taylor steered Luv Lorelei to a 1:55.2 victory as the favorite, with Jordan Ross following two lengths back with second choice Jusmakinyalook, timed in 1:55.4.

“I think these two fillies could be a good combination in the sires stakes this year,” said the conditioner after their one-two finish.

Indiana Sires Stakes action is familiar territory for both fillies. As freshmen, both trotters qualified for the $270,000 Super Final last October. Luv Lorelei began her 2-year-old campaign racing on the Indiana Sired Fair Circuit under the tutelage of Matt Rheinheimer. The Muscle Massive—Busybeingdreamy lass, a $9,500 Michiana Classic yearling purchase, earned two wins on the fair circuit before capturing the $25,000 Governor’s Cup championship at the Indiana State Fair by three lengths in a time of 2:02.4.

“Matt broke and trained her and raced her through the fair championship last year. One of his owners sold out to the other group and I ended up taking over the training responsibilities after that,” said Taylor.

Bred by Larry Troyer, Luv Lorelei proceeded to finish second in three of four Indiana Sires Stakes legs for the revised ownership group of Burt Paddock and Kyle Hupfer, gaining the points necessary to start in the Super Final. There, she raced fifth. The filly hit the board in 14 of 15 starts in 2021 and ended the year with $94,630 in earnings. Now a winner in three of four sophomore attempts, the trotter is a six-figure earner.

“She went to Kentucky to Anvil And Lace Farm and was turned out down there for about eight weeks. She wintered good,” the conditioner said. “We started back up with her after the first of the year. She came back in good flesh and looked good. She trained well all winter and all spring getting ready for this year. So far so good with her. The plan was to race her in this series because she fit it (non-winners of two pari-mutuel).”

By comparison, Jusmakinyalook raced exclusively at Hoosier Park last season, winning an Indiana Sires Stakes leg and finishing second in two more. Jordan Ross, who serves as second trainer for Taylor, regularly piloted the Pinetucky—Beldame Hanover filly. In last year’s Super Final she made a break while racing second, eventually finishing last in the field of 10. This season, the $10,500 Michiana Classic purchase has picked up two wins in four starts, and she looked poised to add another win before equipment issues intervened.

“The middle hopple hanger for her trotting hopples came unsnapped and one strap on one side came down. Instead of trying to go through the mile and taking a chance on her stepping on that strap, he (Jordan) did the right thing by pulling her up and taking her out of the race,” Taylor said.

Coming off the equipment miscue, Ross and Jusmakinyalook pushed to the lead from post six in Friday night’s series final. The two reached the quarter in :28.3 and dialed back the tempo to set up a :30.1 second panel (:58.4). Taylor, sitting in third with Luv Lorelei, sent the favorite to the front just before the half and never looked back. Kicking home in :27.1, the filly enters the opening round of sires stakes on Memorial Day with a commanding victory to her credit. Jusmakinyalook, owned by Devon Miller, distanced the rest of the field to manage second. Ross, who also works for the Taylor stable, knows the filly well, and is a tremendous asset in the bike for the conditioner.

“He’s one of my second trainers. I give him the opportunity to drive quite a few horses in the stable. Most of the time we split the driving duties half and half. It was decided last year when we had both of these fillies going, I knew there would be a time I couldn’t drive both of them,” Taylor said of the arrangement with Ross. “He gets along with her really well, handles her really well. He’s got a good set of hands and he’s been real patient with that filly from start to finish. It’s a blessing to be able to have him driving horses with me.”

Taylor’s fillies will have to contend with M-M’s Dream, last year’s freshman filly trot divisional champion and Super Final winner, and Fleurie, the Super Final runner-up from the Peter Wrenn stable. Each filly has registered a qualifying effort at Hoosier Park. To prepare for the first start in a grueling eight-leg Indiana Sires Stakes schedule, Taylor hopes to bring a pair of fresh fillies to battle on Memorial Day.

“They’ll get a few days off. We’ll give them the weekend off and start back jogging Monday. Let them freshen up over the weekend,” Taylor said. “We’ll get them ready for the first leg of the sires stakes, keep our fingers crossed, and hopefully we can do some good there.”