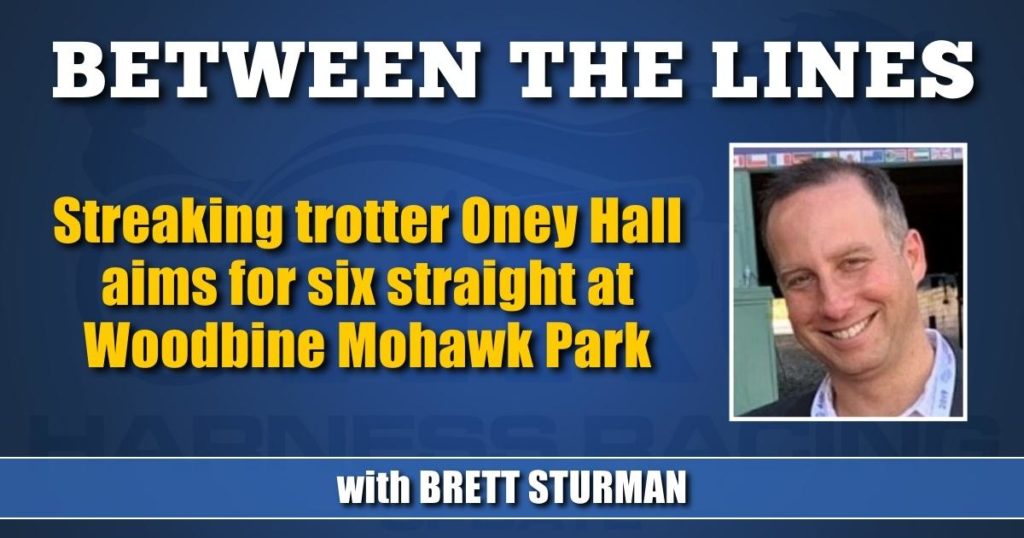 It’s another week, and that must mean that another horse is streaking at Woodbine Mohawk Park. This time it’s the 6-year-old trotting gelding Oney Hall. Owned by Alan Leavitt and bred by his Walnut Hall Limited, Oney Hall is by far the most successful progeny of his dam, On With The Show and the fastest progeny of his sire Deweycheatumnhowe.

Oney Hall, who sports a 1:51 mark, is trained by Bob McIntosh.

Following breaks in stride in consecutive preferreds in February, Oney Hall’s current streak began with a two and a quarter length win on the drop to a NW22000L5C on March 14. From that race, it was back into the preferred ranks where Oney Hall has taken another four of those in a row. The most recent of which came last Monday, and there hasn’t been much of an anxious moment in nearly all races in that span.

Oney Hall came into the barn on McIntosh late in fall of 2020 as a 4-year-old, and at that time had only about $50,000 lifetime on his card. (The trotter now has earnings exceeding $400,000 (by Standardbred Canada accounting), making him among Deweycheatumnhowe’s top earners).

Oney Hall then reeled off a win in his first four starts for McIntosh, the fourth of which was first preferred win (in his first attempt), before making breaks in the late-race stages of two preferreds (both as the favorite) to close out that year.

“When I first got him, he was in good shape and well fed and everything, but he just didn’t have a lot of manners,” McIntosh said. “He was hot, and I managed to get him slowed down and relaxed and I think that made a big difference.”

In 2021, Oney Hall began the year at Woodbine but due to another government imposed COVID-19 shutdown that impacted the province, Oney Hall spent time between April and June at the Meadowlands racing under Brett Pelling. But from July onwards it was back to Woodbine, where Oney Hall became a stalwart in the preferred division.

Much of that success from his 5-year-old season has carried into this year, where Oney Hall has been virtually unstoppable.

“He’s a big horse, he’s 17-hands and he’s got a huge stride to him,” said McIntosh. “He will get out once in a while (referencing breaks made in back-to-back races in February), and that’s when he was sent down to veterinarian Dr. Melissa McKee, and she seems to have the key to him. She tuned him up, and then you’ve got the horse reunited with Trevor Henry who gets along with him great and really does hit it off with that horse. It’s the combination of those people, I just train him,” said McIntosh, graciously.

Indeed, there is something to the Oney Hall and Trevor Henry tandem. Oney Hall’s 1:51 lifetime mark from last year came with Henry in the bike in a race just off a track record for older male trotters, as did his nation’s best 1:52.3 mile this year, taken last week. Career-wise, Oney Hall is 16 for 25 with Henry driving and miraculously has only missed the board once in that entire time, a race in which he broke. Just the fact Henry kept him flat 24 out of 25 is amazing in itself.

During the course of the current win streak, it was announced that Oney Hall’s chief rival, Perfetto, was selected as the invited representative from Canada into the prestigious 2022 Elitlopp in Sweden. Perfetto had gotten the better of Oney Hall throughout the tail end of last year, but this year has been different. Perfetto ran second to Oney Hall in three consecutive preferreds between March 21 and April 25; two of those wins had occurred at the time the Elitlopp announcement was made on April 17 (For more on that story, see pg. 14 of Leavitt’s column The Art of Breeding).

“I would have loved to have sent him over there, but they’ve made their choice,” said McIntosh. “Oney wears trotting hobbles and he’s on Lasix, and they don’t allow either one there. But he could race with no hobbles and no Lasix and that wouldn’t have been a problem. I’m sure he would have been okay.”

While racing primarily in overnights, Oney Hall did have limited tries last year against some of the sport’s best trotters in stakes such as the Caesars, Earl Rowe and Cutler. This year, he’s currently nominated to the Maple Leaf Trot later in the summer at Woodbine, and it’s possible he could surface in stakes elsewhere as the year goes on.

As if he needed it, Oney Hall landed the rail in a field of seven in Monday’s preferred where he’ll face others he’s beaten in form or another routinely over the past couple of months. McIntosh notes that as the season shifts into summer, things will get tougher. For now, though, it remains to be seen how much farther the streak will go.