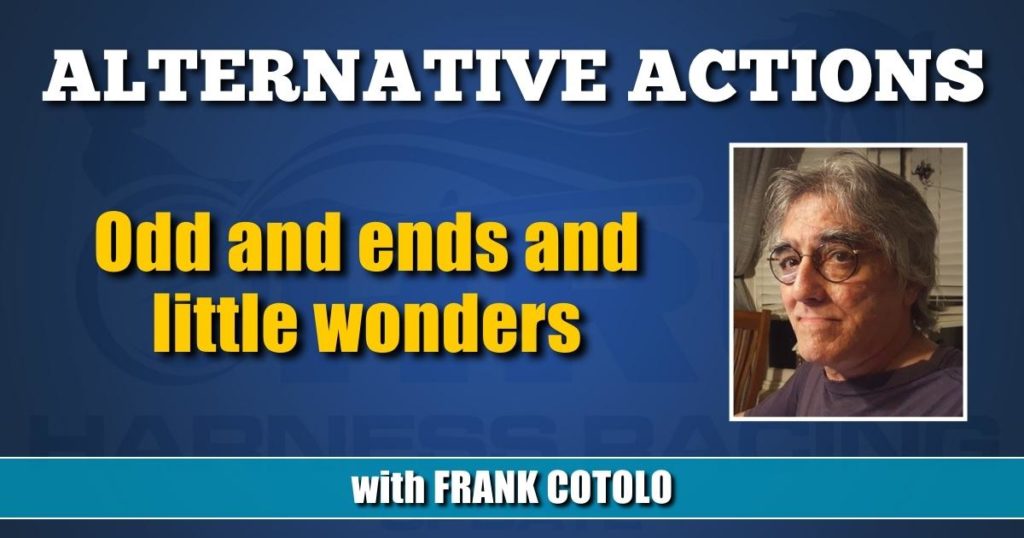 Odds and ends and little wonders

Having a history as a pari-mutuel gambler and a writer, I am a person who uses 99 per cent of the three per cent brain usage available to me and who spends most moments of his life thinking about and concocting alternative actions (AA).

This month’s AA episode is the debut of a format we will deliver now and then. It is a sketchy memoiresque [sic] collection of ideas, opinions, celebrations, etcetera, that float over, under, around and through my busy, alternative consciousness.

Thoroughbred handicappers always argue their opinions about jockeys. Who is good, who is bad, who is a natural, who is asleep at the reins. I find the arguments moot considering something I have witnessed over the decades that provides a once-and-for-all answer for my money. When a horse continues to race after dumping a jockey at the gate, it always runs faster (better) without the rider and even beats the field a lot. I know that is a semi-empirical result. But really.

Speaking of jockeys and handicappers, harness racing drivers are cut down and raised up based on what? Here are some answers.

Speaking of drivers, the most memorable person sitting in a sulky dragged by a 1,000-or-so pound steed in a race surrounded by other multi-thousand-pound steeds, is Gene Vallandingham. One night at Los Alamitos, Gene was in a spill near the finish line of a race and it tossed him from his seat so he hit the track surface hard. Knowing in his heart that a driver is an important character in the drama (not the sport) that is harness racing, immediately following his impact Gene rolled over and used his appendages to kick him into a kneeling position and project him to stand, upon which time he stood before the crowd and raised his hands like a Broadway star after singing the last note of a solo and remained in that position until the applause died down (at which time he presented a polite bow and walked off the track).

It is a shame that Gene’s surname has to be the most mis-pronounced driver surname in the history of the sport. It is a subtle mispronunciation but enormously consistent when it is pronounced “Van-land-ing-ham.” Adding insult to injury, Vanlandingham was not even a human; he was a champion American thoroughbred and I always wondered if the horse was named after Gene (who preceded the act of living long before the horse was foaled) because it was so obviously misspelled.

Speaking of drivers, what happened to the Meadowlands’ Mean Tweets? The feature that showed drivers (see paragraphs above) reading disparaging Twitter comments about them is laugh-out-loud funny. Yes, it is borrowed from another source, but as I was told by a veteran comic when I was writing jokes for stand-ups, “Amateurs imitate; professionals steal.” Using the format for harness drivers, as applied by Andrew Demsky, is a stroke of AA genius and should find a way to continue and be distributed as a promotion for finding new fans.

Audiences of all ages love when celebrities from all theaters of show business address the public with humble attraction. If that was not true, Jimmy Fallon would not host “The Tonight Show” and nor would Charles Barkley be comfortable hosting his void-of-edited basketball opinions. Watching Scott Zeron read “Scott Zeron is trash,” does not give a person enough time to finish laughing before Corey Callahan reads “Corey Callahan is an a**hole, you should get lost at Dover Downs.” Or to experience Leon Bailey’s version of laughter. You can still see some segments on YouTube and make note of comments like “Do more of these” which must speak for tons of folks that still have not seen the variation on the hilarious format.

From some of the contents of this AA contribution, there are bound to come topics I shall discuss at greater length in future episodes. Meanwhile, if you have a response to anything mentioned in this episode (based on your own amount of brain usage and experience in our sport) then please send any and all comments to HRU and we will respond to your responses in another edition of this format or we will merely praise your amount of brain usage. However, if you would like to write something and not be identified, please do not include a byline).