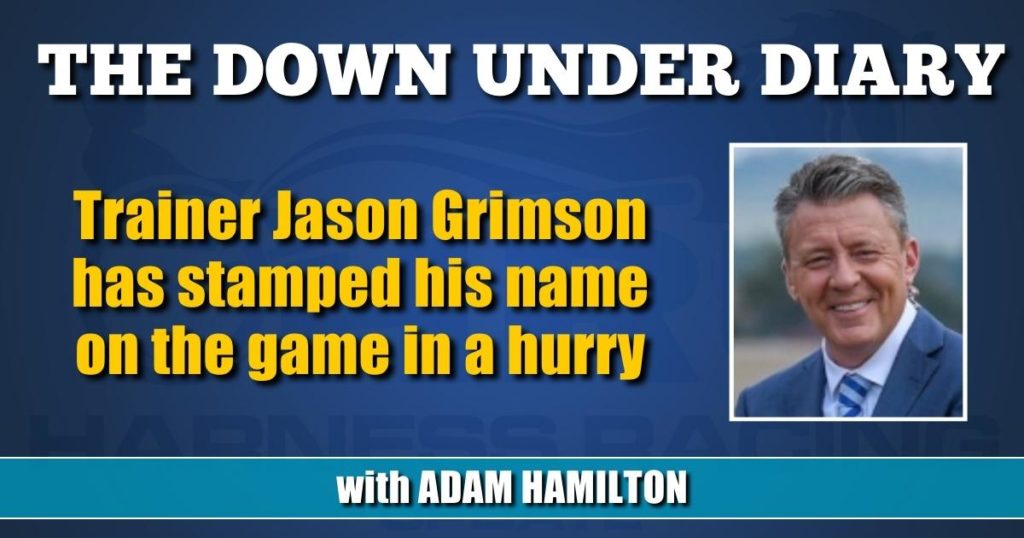 That is what most harness racing followers were asking themselves at the height of the theatre that was last December’s Inter Dominion pacing final at Menangle in Sydney.

And that’s how quickly and stunningly that “guy” – young trainer Jason Grimson – has emerged into the big league.

Grimson had just watched his recycled and much-improved pacer Boncel Benjamin run a close second in the pacing final and felt he’d been robbed.

He charged down to the track after watching the race, spoke with young driver Josh Gallagher, and the pair immediately fired in a protest against Expensive Ego’s driver David Moran for taking their running halfway down the straight.

Once inside the stewards’ room where the protest was covered live on TV, most people had their first glimpse of Grimson.

Although frustrated and impatient at times, Grimson argued his case well, Gallagher did his bit and – in a decision which still divides opinions – the protest was upheld and Boncel Benjamin crowned the Inter Dominion winner.

Whether you agree with the verdict or not, what’s indisputable is the remarkable job Grimson did transforming Boncel Benjamin from a “has-been” claimer into winner of Down Under’s biggest and most-sought after pacing prize.

“Even all these months later, I still marvel at it,” Boncel Benjamin’s part-owner and former trainer Steve Duffy said. “He’d only had a horse a few weeks when he told us he’d win a big race with him… he was right.”

In those euphoric moments after the “win,” I overheard a leading racing journalist ask Grimson: “Needless to say he (Boncel Benjamin) is the best horse you’ve trained?”

The always direct Grimson replied: “Nope, he’s not even the best horse in my stable.”

Grimson had been telling those closest to him for months that another recycled former Victorian pacer Majestic Cruiser was the stable star.

Majestic Cruiser only finished sixth, albeit from a bad draw, in that Inter Dominion final, but Grimson knew it was a learning curve.

“It was the series he needed. He was a sit-sprinter, a bit one dimensional before it, but he had bad draws, had to do some work through the series and it really toughened him up,” Grimson said.

Last Friday Grimson did what very few Aussies have been able to do, go to New Zealand and beat their best on their own patch.

And he did it with Majestic Cruiser.

More on that soon, but let’s get back to that first question … “who is this guy?”

Grimson grew up in the passionately strong harness region that is NSW’s Riverina. Home was Young, about 90 minutes from the mecca of the region, Wagga.

“Dad was a trainer and I did a lot with the horses when I was really young, but then he gave it away,” Grimson said.

“I had a long time away from the horses. I moved to Canberra and was a concreter there for five years, that’s where I thought my life would be.

“It was hard work, really hard work, but you made good money. In the end, I just got sick of it and started to think about the horses again.”

Grimson moved back to the Riverina, worked with a couple of local trainers, and then came an offer from Jarrod Alchin to move to the “big smoke” (Sydney) and work for him.

“He (Grimson) was just a natural horseman. You could see it straight away and people talked about it who’d worked with him (in the Riverina),” Alchin said.

After a year or so with Alchin, Grimson got the first horse of his own, filly Dont Think Twice, who won the Group 1 Bathurst (2YO) Gold Tiara.

“I was so lucky, the first horse I got won a Group 1 race. Then I was up and running,” he said.

Grimson’s stable continued to grow at Menangle, but it has been the past 18 months where he’s stamped himself – first through NSW, then nationally and now internationally.

“To take a horse to NZ and beat their best is very satisfying. It’s up with anything I’ve done so far, for sure,” he said.

“It’s another milestone for me and the people I’ve met and things I’ve learned in the few weeks here have been invaluable. I’m sure I’ll head home a better trainer for it.”

“Majestic Cruiser will have a week off in NZ and then come home to get ready for Queensland. He’ll head a big team of horses I’ll take up there for the major races,” he said.

Majestic Cruiser’s major targets will be the Group 1 double of the Sunshine Sprint (July 16) and Blacks A Fake (July 23).

“He’s a genius. He’s taken two horses for me and had great success with them both, I’ve just sent him a third,” he said.