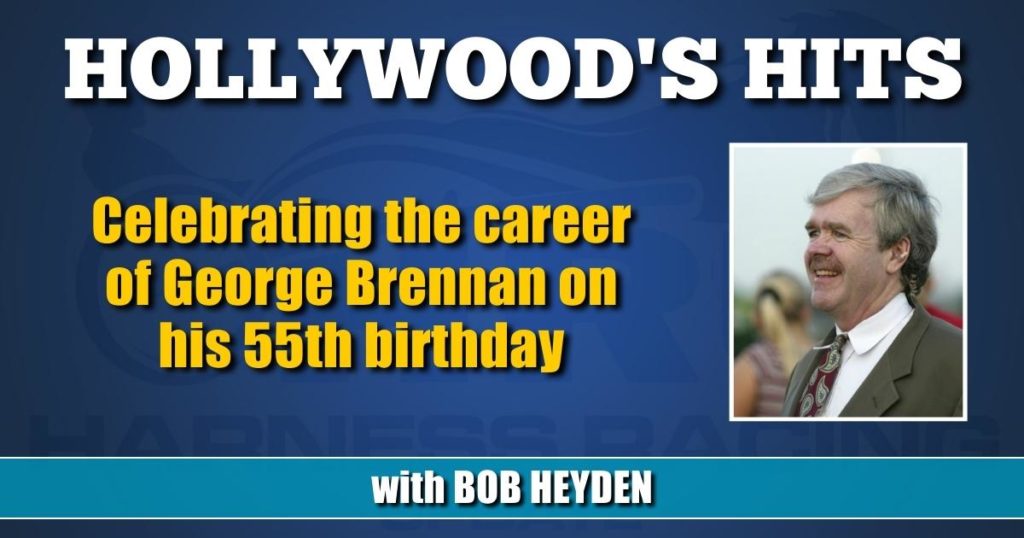 Celebrating the career of George Brennan on his 55th birthday

George Brennan, who turned 55 on Wednesday (April 20), is the next driver on track to reach $200 million lifetime.

Brennan is also the only driver to win the Hambletonian the Oaks without having driven anyone in the elims. He did that in 2011 with Bold And Fresh, who paid $51.40.

Let’s take a look at some of Brennan’s other highlights:

Brennan has been leading driver in New England, at the Meadowlands and at Yonkers.

In 2011, he became just the second driver, joining Brian Sears (2009 and 2013), to win both the Hambletonian and the Hambletonian Oaks in the same year. Broad Bahn won the $1.5 million Hambletonian for trainer Noel Daley and Bold And Fresh the Oaks for Doug Miller. Broad Bahn was the third choice at $14.60 and Bold And Fresh the sixth choice at 24-1. That year the pot was $750,000 for the Oaks, making Brennan’s best ever day a $1.2 million+ afternoon at the Meadowlands.

Maybe the best horse Brennan ever drove was Shark Gesture. He won the Breeders Crown at 3, then resurfaced with the Remmen barn three years later and took the Canadian Pacing Derby, the Haughton, the Dan Patch and the first ever Roll With Joe.

Brennan won history’s richest race ever taken by a maiden — the 2003 Metro with Mark Harder-trained Camelot Hall at a purse of $830,798.

The driver also won in a world record time of 1:46.4 in the U.S. Pacing Championship on Hambletonian Day in 2006 with Holborn Hanover, also trained by Harder.

Brennan won the 2006 Goldsmith Maid with Falls For You, the same year he set the half-mile Yonkers Trot record of 1:55.4 with Glidemaster while subbing for an injured John Campbell. It was the richest ever Yonkers Trot edition ($728,930). It was the career finale for Glidemaster, that year’s Horse of the Year and Triple Crown winner trained by Blair Burgess.

In 1995 ,Brennan drove both 2-year-old pacing division winners Chippies Ruler and A Stud Named Sue — both for trainer Liz Quesnel. The winter prior, Brennan came down from his home base in New England and won his first Meadowlands race with veteran trotter Indianapolis.

Brennan has done great work with trotting talent. He won the 2010 Kentucky Futurity with Wishing Stone, the 2004 Hambletonian Oaks with Silver Springs for a $500,000 pot, swept the Del Miller in 2010 with Glide Power and Springtime and won three straight Dexter Cups at Freehold — in 2005 with Lindys Five Hundred, in 2006 with A Rod and in 2007 with Manfinity.

Fillies and mares have been something of a specialty on the Brennan menu of accomplishments. Glowing Report for trainer Jerry Silverman won over $2 million mostly with Brennan in the sulky. The driver won the Milton back to back with Loyal Opposition in 2004-2005; the 1998 Shady Daisy with Galleria; The Mistletoe Shalee with French Panicure in 1999 and then Hana Hanover in 2007 (He came back to win the Breeders Crown with Hana in 2009). Brennan also took freshman filly Stylish Artist to the winner’s circle in the Breeders Crown.

He also took back-to-back Breeders Crowns for sophomore pacers in 2006-2007 with Shark Gesture and Artists View. The latter was the beneficiary of a speed duel between Tell All and Always A Virgin. Buzzy Sholty trained the $90 winner.

Some of his other free-for-all wins were with Alexie Mattosie in the 2011 William Haughton, Betterthancheddar in the 2012 Franklin for $500G and then the Quillen Memorial for $217G; Copywriter in the Garnsey Memorial, Doctor Butch in the $275,000 Rooney in 2013 and a couple of Tattersalls of note: 2003 with Whatanartist and 2006 with Shark Gesture.

Happy Birthday to the “Minister Of Speed.”