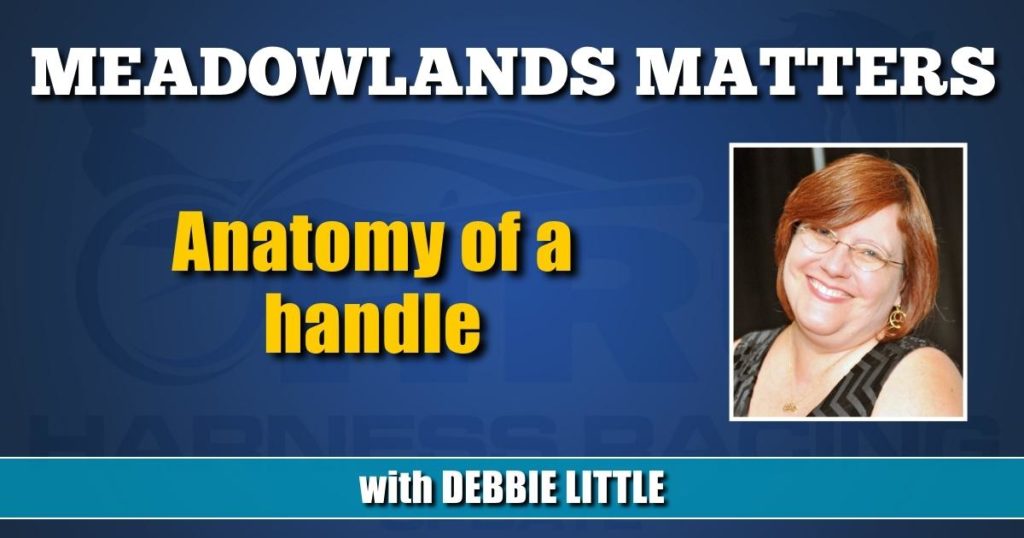 Anatomy of a handle

Trying to take in a good handle is like a game of chess. There are a lot of moving pieces and it’s hard to recover from a bad move.

The Meadowlands started out playing smart on Saturday (April 16), but then they were shown a move they couldn’t see coming.

“We were on the way to handling $3 million going into the sixth race,” said Meadowlands’ post-time coordinator Michael Antoniades. “So, we were averaging close to $240,000, $250,000 a race, but then it started to rain.”

The rain began in race six, but didn’t appear to be the reason for the $201,376 race handle. The $50,000 guaranteed early pick-4 (races 6-9) had a strong showing with $86,049 in the pool, but with two scratches, the carded field of eight was reduced to six creating smaller win, exacta and trifecta pools.

Since Daylight Savings Time started in mid-March, thoroughbred tracks have been racing later, especially on Saturdays, with several having Kentucky Derby prep races, thus increasing the scramble for every dollar.

“I think the story of the night, if there was no rain and we were allowed to continue the way we were going, we would have been headed towards $3.1 [million],” said Antoniades. “And we were fighting a lot of traffic those first six.”

The time between the races is always an important component in a handle discussion. The late Pick-4 (races 10-13) did much better even though it started with a seven-horse field and had a deluge to contend with, because there were 29 minutes between races nine and 10.

“Race 10 we did fine. We ended up about five or six minutes behind Los Alamitos and we ended up on TVG. We were about 10 behind Woodbine [Mohawk Park]. We were about 12 behind Northfield. We were in good spots with all the tracks we were trying to communicate with. But then when we started going quick, if you get the post times for [Mohawk] and Los Alamitos, you’ll see that we crashed into everybody the next race by going short.”

Race 11 at The Meadowlands went off at 10:27 p.m., just four minutes after both Los Alamitos and Mohawk, while Big M race 12 split the other two tracks, a minute after Los Al and a minute before Mohawk.

“You could tell on television that the track was getting wetter, more water was spraying and there were a couple of flashes of lightning, so that was the reason we sped things up some,” said Meadowlands’ race secretary Scott Warren.

As technologically has advanced, some things remain old school, and one of them is that many people don’t like to bet until after they see the post parade.

“It was a trifecta of problems,” said Antoniades. “Short intervals, short post parades and increased competition from tracks we were running into. All that was weather related.”

Antoniades believes if it wasn’t raining, instead of the average handle for the last three races being just under $148,000, it would have been over $200,000 and wouldn’t have resulted in a loss of almost $70,000 per race.

Shortening the post parade from a typical seven minutes down to five may not seem very different, but it was, because the numbers don’t lie.

“The shorter the post parades, the more damaging it is to handle and that’s a simple explanation through 50 years of horse playing,” said Antoniades. “People do not go to the windows until they see the horses on the track.”

It wasn’t the best situation for Warren, who works hard to put together a competitive and bet-enticing card.

“It’s very frustrating,” said Warren. “But, Michael [Antoniades] didn’t all of a sudden sit there and start placing races in wrong spots.”

The bright spots of the night, not counting the lightning, were races three and four, which brought in higher-than-expected handles due to a shoe repair and a recall, respectively.

“I think they should pass a rule with the New Jersey Racing Commission that there should be either a shoe repair or recall every race,” said Warren with a laugh.

At the end of the day, $2,784,627 is still a very good handle for a Saturday night, but it’s hard not to think about what might have been. Without the rain, $3 million was possible, if not expected. The flip side is that without the shoe repair and recall, the rain could have done much more damage.