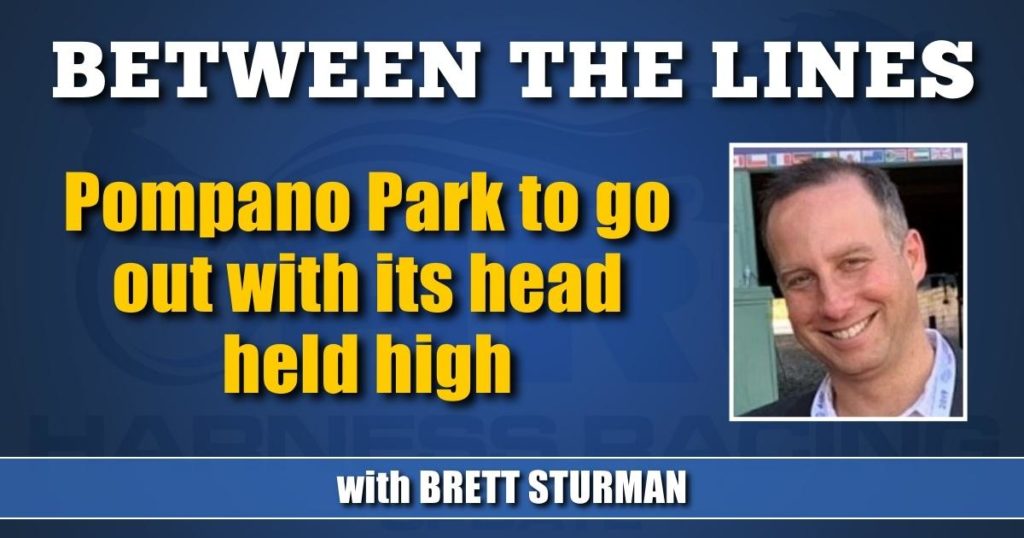 Pompano Park to go out with its head held high

After 58 years, the Florida track will play host to its final race card on Sunday.

As Pompano Park enters its final card Sunday in the track’s 58-year history, the fact that it has made it to this point is a testament to what has transpired at the track in recent years. Pompano has undergone a renaissance over the past decade, with its success accelerating even more so just in the last two years, but, sadly, it has finally run out of time.

Not too long ago, Pompano Park was left in obscurity. It wasn’t uncommon for entire race cards to unfathomably handle less than $100,000. Today, from a handle standpoint, more money is wagered at Pompano than most other harness tracks on the continent.

From the track’s inception in 1964 through 2014, there were just three instances of Pompano having a race card handle over $1 million. The next three instances of going over the $1 million threshold were accomplished by 2018. Then, an explosion was witnessed last year when the track had 21 separate $1 million nights in 2021. That included a record handle taken on closing night last season of over $1.7 million. Pompano has gone over $1 million in handle multiple times in 2022.

Track announcer Gabe Prewitt has been a constant in the track’s handle resurgence.

“The thing I’m most proud of is that for a track with the historical significance of Pompano Park and the people that have made this home for decades, Wally Hennessey, Mickey McNichol and all the other drivers and trainers and horsepeople, is that everyone can step off the field a sense of pride,” said Prewitt. “We’re going to be the first track ever that’s shutting its doors after having its two best wagering seasons of all-time, that’s not something that ever happens. And not that it wouldn’t have been fondly remembered by the people that had been here for decades if we closed when we were betting $80,000 to $100,000 a night because it was such a great place at one time, but we can go out now having gained respect back. I’m proud of what we were able to accomplish and send out the track as well as we could have.”

Rumors of Pompano’s demise date back to before even Prewitt first arrived on the scene at the track nearly a decade ago, and the fact that Pompano has made it even to this point is an accomplishment in itself.

“From being on the inside of some of these meetings, I do think that the success we’ve had did buy us a little more life,” Prewitt said. “It would have been a lot easier to close a place that’s doing no business than a place that has some life in it. The success we had last year played into a lot for us to even get a curtain call for this year because they (Caesars Entertainment) were under no obligation to race.”

Though Pompano has had the unique challenge of operating with the persistent possibility of a looming closure, it hasn’t differed from any other harness track by having to operate today with its heyday long in the past. The challenge in recent times had been trying to chart a course forward despite the prevailing notion that the track had run its course.

“With all respect to the beauty and the history of Pompano Park, we had to create our own path to try to be successful in today’s climate, which is mainly off-track dollars to a large extent,” said Prewitt. “We had to look in the mirror and ask ourselves things like why do we race on Friday and Saturday nights if it’s not like we can offer a nice dinner in the clubhouse, let’s look at our betting menu, at our takeout rates, and think how we can be more customer friendly. So, we had to take that look, recognize that we weren’t going to be what we used to and find out how to carve a path in today’s environment given the hand that we’ve been dealt.”

It may seem today that the handle surge at Pompano happened almost overnight, but it was the result of a longer, more gradual process. As Prewitt explained, “You can’t go from betting $100,000 to $1 million in two weeks, but you can go from $100,000 to $220,000. And then if you can get to $220,000 you can get to $350,000. And from there you just continue to climb. We were all shocked at how high we were able to go. I just want competitive racing. Whether the condition is a TrackMaster rating of 70 or less makes no difference in my mind, but the fact that we did have maybe lesser quality stock and with all of the infrastructure problems we had, it really is amazing, and I just have to thank all the people that stood by us.”

Starting with Prewitt’s self-deprecating nature, another part of Pompano’s formula for success is that it never took itself excessively serious and embraced who they were while operating on borrowed time.

“Quite frankly, the people that were out there betting our product didn’t care that the grandstand was condemned, or the quality of your broadcast, or maybe the lights will turn on or they won’t, or if we’ll be able to get tote prices up after a race,” said Prewitt. “We didn’t give up. We were trying, and that’s probably what bought us some leeway even with all the challenges we had. We had a lot of engagement and listened to the fans, so I think people gave us a longer leash than they would have otherwise because we were trying.”

The role that social media played as the track’s handle ascended in recent years cannot be overstated enough. Individuals who came to know Pompano through online mediums such as Twitter and joined in nightly using the #senditin rallying cry, became affectionately known as the #senditin army, almost like an island of misfit toys.

“The place was sort of dying so to speak, and then came a resurgence that in large part included the #senditin army. These are people who love the place and bet on it every night and helped pick things up and get us carried across the finish,” Prewitt said. “Because we were very close to being off everyone’s radar, and we were able to pick the place up with all those people supporting the product and betting their money. You couldn’t pay for what we’ve had on social media every night.

“How cool is it to have this newer audience, to have gained traction and gained respect between the fans and in the industry. We’ve got people that have only known the place for a couple of years and only through social media interaction, and they’ve been booking trips, flying in here and seeing the place and it shows how easily you can fall in love with the place.”

Ultimately, the team at Pompano reached the end of its final year, but the track got a lot of mileage out of the rumored ‘final year’ going back over a decade.

“It’s not like we died quietly,” said Prewitt. “It makes me smile that we were able to give the place a sendoff it deserves given its history and with all the people that have raced and put in the work to race over the years. It’s been a very fulfilling way to know that we’re sending it out with a sense for all the people here that we’re going out on top.”

In recent years Pompano Park may not have always raced the highest quality horses, but this was not an operation that was outclassed. And certainly not outfought.