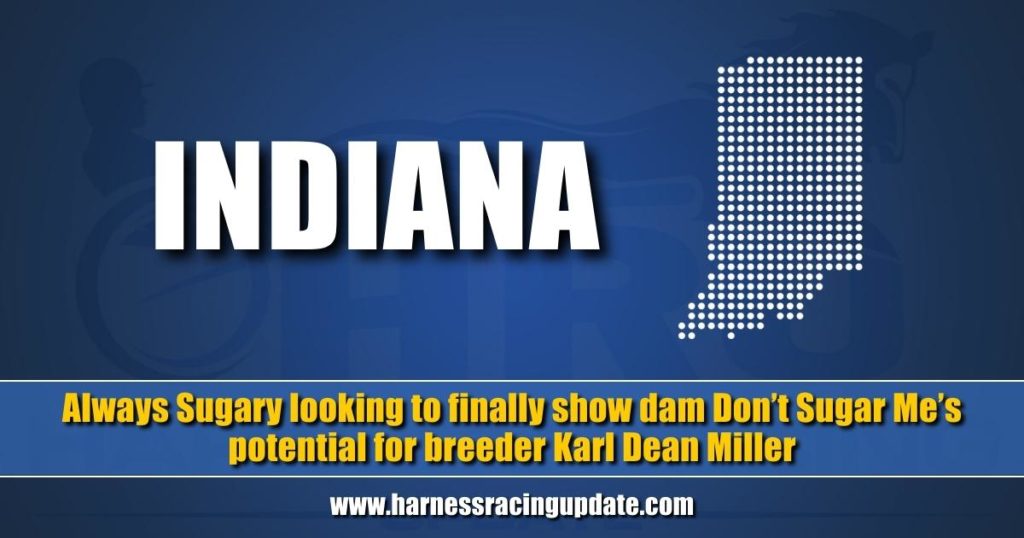 In the speculative business that is breeding, it is hard to know just what characteristics will be passed on to a foal, and whether that mix of genetics will culminate in a winner. Ligonier, IN-based breeder Karl Dean Miller placed his hopes in Dontgetinmyway mare Don’t Sugar Me as his next producer, but has experienced mostly disappointment from unfulfilled potential. Always Sugary, the fourth and final foal from the dam, could break the pattern established by her siblings. The sophomore is two-for-two in the early going at Harrah’s Hoosier Park Racing & Casino, a 1:56.1 winner on March 31.

“I try to look for mares with early speed. I like to see something that did well at 2 and 3. Then you breed them to the latest and the greatest and hope for the best,” explained Miller. “I liked her family. She was just a real good-looking mare. For a Dontgetinmyway, she was 16.2 and perfect conformation.”

Out of the Steady Special mare No Sugar Added, Don’t Sugar Me won 14 times over the course of her career, topping the dam’s 11 foals (10 winners) with earnings of $271,376. The family includes three other six-figure earners – More Sugar Added, Sugar Nips and No Sugar Needed – and Don’t Sugar Me is a half-sister to Challo B B, dam of millionaire and Indiana Hall of Famer Go On BB and Breeders Crown champion Sayitall BB. Several of the mares foaled by No Sugar Added have gone on to produce winning families of their own, yet with Don’t Sugar Me, replicating success has proven difficult.

Miller said that each foal possessed a great gait, but they inherited qualities from the dam that impaired their ability to succeed. The first three foals – Freakie Fritzie, Meant To Be Mine and Velocity Gator – each had issues with kicking, a trait passed down from Don’t Sugar Me.

“She would pin her ears a lot and pretend to kick you, but she never would. The mare would get excited,” Miller said. “The mare always threw good sized foals that were good looking. The foals were just always tough.”

Freakie Fritzie, the first foal, never made it to the races. Bringing $30,000 at the Hoosier Classic sale, the Rockin Image colt proved a challenge from the beginning. An incident when breaking the young pacer led to his tragic demise.

“When he was a baby, he was just really, really tough to handle. I worked with him a lot, all the way up to the yearling sale,” said Miller. “I received a call from the guy that bought him saying they were having a hard time with him and they sent him on to Schwartz Boarding Farm to break. They had him harnessed and he got away from them, went on a kicking spree and went out across a frozen pond. He broke through the ice and went down.”

Owner Merrill Hobbs liked Freakie Fritzie so much that he bought the full-sister, Meant To Be Mine, that fall. She also proved tough to handle and only produced one victory during her time on the track.

“They said they had such a hard time shoeing her, putting hobbles on her, stuff like that. Even as a 3-year-old, it took one cc of Dormosedan and one cc of Torb, which is a Class 3 drug, just to shoe her,” Miller said. “I thought she looked unbelievable. A rear end on her like a diesel truck. Just looked like a legit filly but never came through.”

Although Velocity Gator is the most productive of the foals to date, the Always A Virgin gelding also displayed a tough disposition. The four-time winner paced in 1:50.1 as a freshman at The Red Mile, but has only managed $42,280 in lifetime earnings. Now four, Velocity Gator is still racing, carrying a 1-1-1 record in six starts this season.

“Mark Evers said that when he was trying to put hobbles on, he was such a kicker and would cow kick so badly, he gave him to a guy that would train zebras. The guy said he’s never had a zebra kick this bad,” the breeder said.

For all the challenges that the three previous foals presented, Always Sugary was different. From a marketability standpoint, the damage had been done. Miller opted not to enter the filly in a fall sale due to the reputation and lack of production.

“The others really had not done much. I don’t think any one of them had made $10,000 by that time. If you take a yearling to the sale and the mare has had three misses, you can’t expect to get a whole lot of money for them,” he said.

Miller broke Always Sugary and as he worked with the young pacer, it was evident her temperament did not match her older siblings.

“She was different. She just seemed to have a little more common sense to her. She showed a little bit of toughness along the way, when we trimmed her feet as a yearling, but never like the others,” said Miller. “I always thought that mare would throw a good one.”

Dale Hiteman, who was familiar with Velocity Gator, reached out last January to inquire about the filly. He traveled four hours to sit behind and jog the then 2-year-old before buying her privately to race under the Dtm Stable banner. Soreness last season while training resulted in the pacer being turned out. While her pari-mutuel debut was delayed until this spring, she made good once on the track. Lining up behind the gate in the first race on Hoosier Park’s opening night program, Always Sugary and Hiteman used a pocket trip to perfection, kicking home in :28.2 to score a 1:58.1 triumph.

“He’s trying to teach her to float out there and not get crazy going for the front,” Miller said of Hiteman’s work as conditioner and driver. “I think Dale is a perfect fit for the filly.”

Building on her opening night win, Always Sugary was entered into a $12,500 division of the Rosie Harness Memorial for fillies and mares Thursday night. Drawing post five and sent off as the favorite in the night’s fourth race, Hiteman eased his charge out to second racing into the turn. The duo then sat patiently through fractions of :28, :57.1 and 1:27.4. In the stretch, the veteran reinsman dropped to the inside and surged past leader Start Takin It Off before reaching the wire comfortably in front by one and one-quarter lengths. The filly shaved two full seconds off her winning time from one week earlier, and she shows the potential to develop into the type of racehorse her breeder believed Don’t Sugar Me could produce.

“I’m her biggest fan,” said an enthusiastic Miller. “I thought she went a really nice mile. I look forward to seeing what she does the rest of the year.”