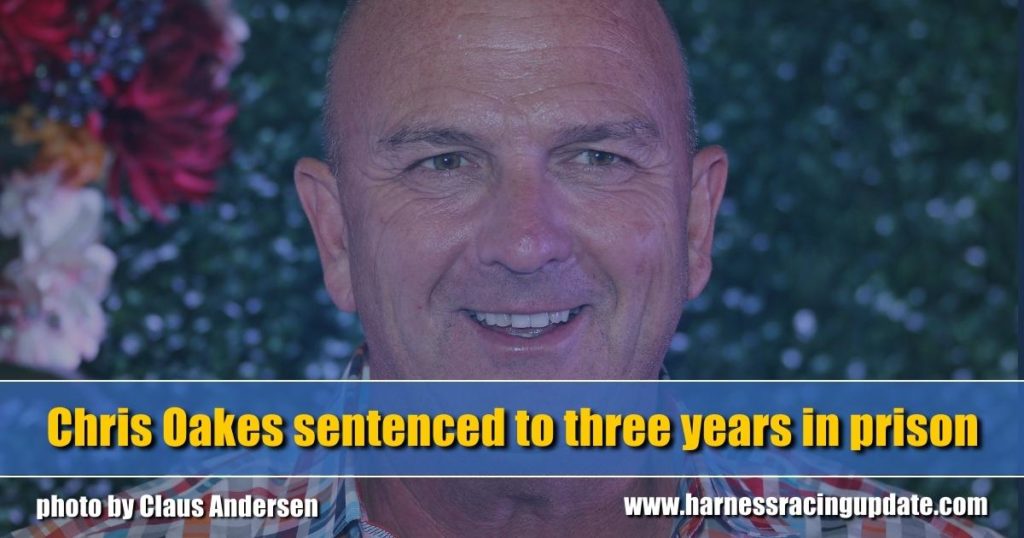 Trainer Chris Oakes, a central figure in the doping scandal that has rocked thoroughbred and standardbred racing, was sentenced Thursday (March 3) to serve three years in prison.

In October, Oakes, 57, pled guilty to one count of misbranding and drug adulteration with intent to defraud or deceive. Oakes has admitted to supplying PEDs to high-profile thoroughbred trainer Jorge as well as using illegal drugs with his own horses.

The decision was handed down by Judge Mary Kay Vyskocil in the United States District Court for the Southern District of New York before a small audience that included Meadowlands owner Jeff Gural. Under the sentencing guidelines, three years was the maximum allowable sentence. Oakes’ sentence will begin June 1.

“I believe this offense is serious,” Vyskocil said. “I have taken that into account as well as the characterizations of Mr. Oakes as a human being and a person. But I do not see any compelling reason to go below the sentencing guideline.”

While the case against Oakes involved his pattern of doping his own horses, it also focused on his relationship with Navarro and the doping of Navarro’s XY Jet (Kantharos). Oakes supplied Navarro with PEDs that were given to X Y Jet, including a “blocker” PED. On Feb. 13, 2019, the same day X Y Jet won an allowance race at Gulfstream, Navarro instructed Oakes to enter the Gulfstream backstretch to administer PEDs to the sprinter.

While still in training, XY Jet died in early 2020. Navarro said at the time that the cause of death was a heart attack.

Addressing the court, government lawyer Sarah Mortazavi lashed into Oakes, saying that he had failed to realize the severity of his actions.

“The defendant has not grappled with the seriousness of his crimes,” she said, “Instead of remorse, we have gotten from him self-serving excuses meant to minimize his conduct. He has said that the government can’t prove that I killed any horses or did something to improve their performances, so what I did was not detrimental to these horses. But he injected these horses with drugs up to and including the day of their race, putting their health at risk.”

Oakes’ attorney Page Pate did not deny that his client used PEDs and broke laws, but asked the court to consider that trainer had many good qualities. That, he argued, was justification for leniency.

“The offenses committed, while clearly wrong, are inconsistent with who he was as a person and as a trainer who cared for his horses,” Pate said. “It’s true that he tried to win purses by using PEDs he got from Dr. (Seth) Fishman and PEDs he created on his own and that that gave him an unfair competitive advantage in his races. But the narrative became Mr. Oakes abused his horses. Looking back over his 40-year career that is not consistent with what so many people who knew him and worked with him have told the court. The things he has done for his community, his random acts of kindness, they show that he is not a criminal.”

When addressing the court, Oakes, who began to choke up, brought up what he said was a long-running battle with alcoholism.

Vyskocil said Oakes would have to enter a drug and alcohol treatment program once in prison.

Oakes said he was remorseful and blamed his decisions on stress and the pressure he felt to succeed.

“I was constantly unhappy, irritated and depressed,” he said. “I wanted everything to be perfect and I demanded that of my wife, my kids and my employees. I regret the path that I followed. I allowed stress and the pressure I was under to dictate my decisions. I have no one to blame but myself. I am aware of the crimes that I have committed and I have learned from them. I humbly ask for leniency.”

Gural, who had banned Oakes at his tracks well before he was indicted, sat quietly and listened to the testimony. Gural was instrumental in putting together the investigation that led to Oakes and more than two dozen others being indicted on charges related to doping.

“I am glad I came, if for no other reason than to see how justice works,” he said. “I thought everybody did a good job and the judge understood the severity of the situation. It is a tragedy. These horses can’t talk for themselves. When I started this, I had friends who told me it was a waste of time, that it was impossible to catch these guys. Getting 5 Stones involved and the fact that so many horses died in California, that got the attention of the U.S. Attorney and they were willing to prosecute. I spent a great deal of time talking to the U.S. Attorney and convincing them that there were people out there using drugs.”