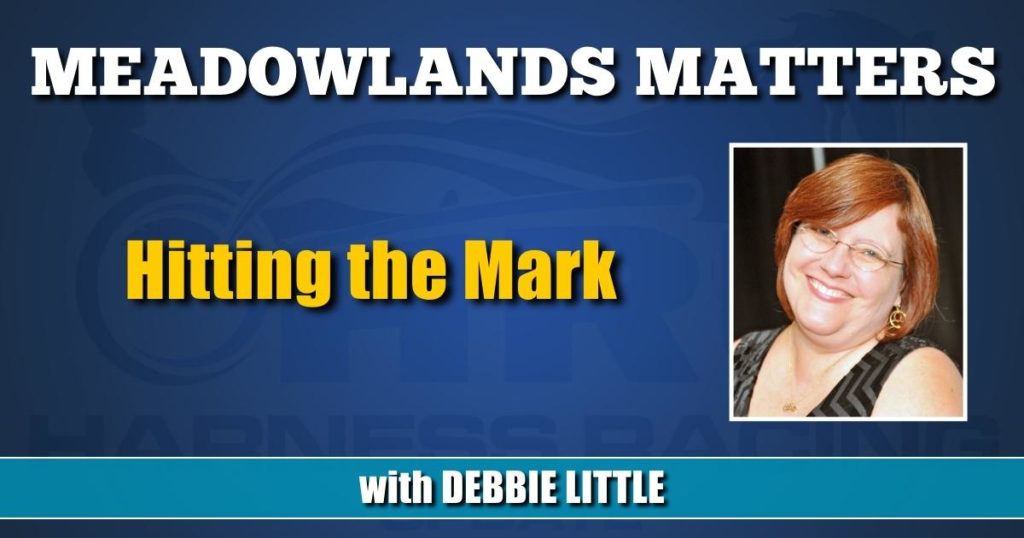 What happens when two great minds get together?

The series “Mark On Mic,” which provides strategy, laughter and, unfortunately for now, losing.

It all started last year when Meadowlands’ racing and simulcast manager, Shades Demsky, got a random call from driver Mark MacDonald.

“I was getting home from the gym. It was late and [Mark] called me and I sat in my car for almost two hours parked outside my place talking to him about what we can do,” said Demsky.

MacDonald wanted to do something to make horses more exciting. He had many ideas, including trying to mic up the drivers the way they do in NASCAR.

“I said, Well, there’s a race call, and NASCAR has a production staff of probably 40 people monitoring everybody’s audio, so, no, we can’t do that,” said Demsky. “And he doesn’t like to hear the word no. So, I said, let’s get a mic on you and another driver and see what that is. So, we did that and I said why don’t we do this every week?”

Demsky had been working on a similar mic’ing idea and already built graphics that became the opening animation for Mark On Mic.

MacDonald likes it when players in other sports, such as football, are mic’d on the sidelines and thought something like that would be good for harness racing.

He had also been asked to wear a mic in a race in Canada over the summer and even though the mic went dead halfway around the last turn, he had fun doing it.

“Around the same time down here we were talking about needing transparency,” said MacDonald. “To me it was like if you want transparency, there’s your transparency.”

For those who have not watched Mark On Mic on The Meadowlands’ YouTube channel under “fun and games”, here is the link: https://bit.ly/34X8wLV

MacDonald and a guest driver talk about their horses, the competition and race strategy.

For Demsky, the approximately five-minute feature can take as much as eight hours to put together before they drop on social media every Wednesday at noon.

“Shades has done a great job,” said MacDonald. “Fifteen minutes of audio, piecing it together with video and putting in the live race on top of it. I think he does a great job editing. I’ve seen my brother Curtis do it and I know it’s not an easy job.”

MacDonald’s brother, Curtis, is the owner/operator of CUJO Entertainment and specializes in productions like this.

“I remember Curtis doing the editing and he’d be over there for hours and he’d show me what he did and it would be like a two-minute clip and I’d be like are you kidding me?” said MacDonald.

For Demsky, it’s important for the clips to have a storyline and one of them is MacDonald consistently poking fun at driver Todd McCarthy.

“Me and Toddy are good friends and he can take a good ribbing,” said MacDonald. “He just kind of rolls with it. I make fun of him and he makes fun of me right back, but I’ve got the camera, so the joke’s on him.”

McCarthy was only a guest on the series once and it looked like he was going to win but his horse broke at the top of the stretch.

“It is a great thing I think, it’s just been really unlucky the way it’s turned out like that for Mark,” said McCarthy. “But I think it certainly is great for the industry. And Mark’s great at it. He could talk underwater. So, if you need a guy to be on in a race, he’s the perfect man for that job, I think.”

In the first two episodes, the guest drivers – Dexter Dunn and Andy McCarthy, respectively – won as the favorite. Unfortunately, that trend didn’t continue.

In the 11 episodes to date, MacDonald has never won and the guests have won a total of three times.

One driver was overheard in the paddock saying that the best way to get a 2-5 shot beat was to put a mic on him.

MacDonald takes it all in stride and remembers the sage words given to him from legendary PEI horseman Mike MacDonald.

“[Mike said] ‘My definition of luck is when preparation meets opportunity,’” said MacDonald. “If there’s a camera on your bike or there is not a camera on your bike it doesn’t make one little bit of difference. I’ve got 10 or 11 wins at The Meadowlands this year and it’s a hard place to win.”

What people probably don’t know is since Demsky has other responsibilities at The Big M, his opportunities to mic up MacDonald are in many cases limited to a Friday night rather than a Saturday when MacDonald would have a much better chance to win.

The series will continue through the end of March when Demsky has to go back to work at Tioga Downs.

The hope is for MacDonald to get a win before then, but either way he’s good with what they’ve accomplished.

“It’s kind of a running joke, but just the fact that we’re having this conversation about it, I’ve already won,” said MacDonald. “If it’s gonna make people talk, hey, I wonder if this one’s mic’d up, if they’re paying attention, that’s good for us. That’s good for our game.”