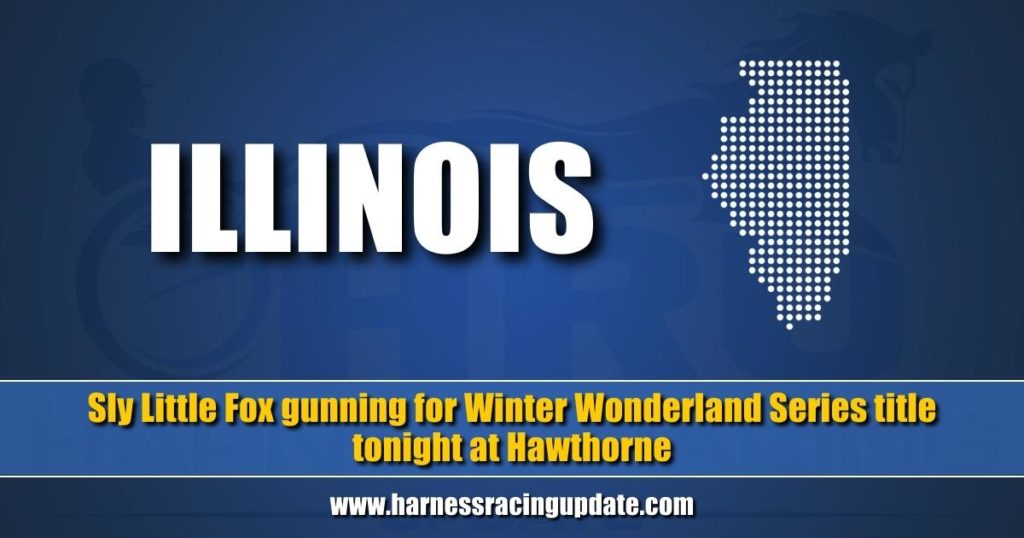 After debuting as a freshman in July 2020, more than 16 months passed before Sly Little Fox returned to racing action. Bambi Fox, her owner and breeder, was unsure the trotter would make it back to the track. Now 4, the mare has bounced back impressively, winning six of eight starts since mid-November, and she will attempt to add a seventh win tonight in the $22,000 Winter Wonderland Series final at Hawthorne.

Fox has always had a passion for horses. In the past she has ridden jumpers and event horses quite often. Today, the veterinarian and owner of Fox Equine Services, has traveled from farm to farm throughout the Paducah, KY area for nearly four decades. It was Fox’s late husband, Jim, that had a passion for racing. When he died in October 2015, she picked up the mantle and continued with the small racing and breeding operation.

“It was my husband’s passion first. When he died and I had these horses, I thought, ‘Well, okay, let’s see what we can do with them.’ I’ve really enjoyed doing that,” Fox said.

The couple purchased On Center Stage at Lexington in 2010 with hopes of having a nice racehorse and broodmare. Her older full-brother, Guiltywithanexcuse, has a mark of 1:52.4 and just shy of $500,000 in earnings. The Classic Photo-Gold Medalist filly, however, never raced. A snake bite derailed her career before it ever had a chance to take off.

“She got a snake bite right above her left knee, and we almost lost her. It gave her arthritis in that joint, so she was never trainable,” said Fox. “I sold her not too long after Sly Little Fox was born. I needed to downsize a little bit. This was the one chance I got to breed to Swan For All. I think it worked out pretty good.”

Sly Little Fox is the fourth foal out of On Center Stage. The breeder had a name picked out based on the filly’s early tendencies, but instead had to settle on the name she races with today.

“It was not my first choice. When the filly was born, she was one of these that as soon as she hit the ground she had something to say. A real talker,” Fox said. “So her barn name is Chatterbox. I tried to name her Chatterbox or some kind of permutation, but could never get what I wanted. I got frustrated and I thought, I’ll just put Sly Little Fox on there, and lo and behold, I got it.”

The Indiana-sired trotter won her freshman qualifier at Harrah’s Hoosier Park by a nose in 2:01.2. She trotted third in her pari-mutuel debut at the Anderson oval on July 7, 2020. As quickly as she started, her campaign abruptly came to a close.

“She qualified and made one start and then had some issues with her front tendons. I didn’t know for sure if she would ever make it back to the track or not,” said Fox. “I brought her home and we rehabbed her. I worked her quite a bit, just getting miles in her and getting those tendons tight.”

Fox had never worked with trainer Mike Hollenback, but upon the recommendation of a mutual friend, she reached out once she felt Sly Little Fox was ready to try racing again. Since then, ‘Chatterbox’ has had plenty to say on the racetrack. Hollenback placed her in a qualifier at Hoosier Park on Nov. 13, where she finished second for Robert Taylor. Five days later, Taylor steered her to her first career win, and did so again the following week, this time in the $18,150 final of the Howard “Bunny” Colvin series, romping by five lengths.

“She’s been really good up front. She was pretty easy to get back going. I didn’t feel like I had any issues with the front legs. She was just green,” said Hollenback.

Moving to Hollywood Gaming Dayton Raceway in December, Sly Little Fox experienced her first miscue, making a break behind the gate and finishing sixth. It would take three weeks to get back in at Dayton, but she returned to the winner’s circle with a 1:58.4 score, her best performance of the abbreviated 2021 season. Sly Little Fox started the 2022 campaign at Miami Valley with a victory, but had a hard time getting back in, so Hollenback sent her to James Eaton to race at Hawthorne

“I knew she could race every week at Hawthorne. I had never raced her back-to-back races after those starts at Hoosier Park. It was usually always two or three weeks before she raced. I called her my thoroughbred because she didn’t race very often,” Hollenback said.

In her Hawthorne debut, Joey Putnam steered Sly Little Fox to a runner-up performance, falling a head short to Spice-It-Up in 1:57.3. In the $11,000 opening leg of the Winter Wonderland Series, held Feb. 6, Mike Oosting guided the favorite to a three and one-quarter length score. Last week she wired the field for Oosting in the second leg to win by more than four lengths, stopping the clock in 1:57.3. Tonight, she starts from the inside post in the $22,000 series final, carded as race five.

After the Winter Wonderland final, Sly Little Fox will receive a slight break before returning to a series at Miami Valley that begins March 2. After the series, the trotter will race at Hoosier Park, which is set to open in late March. To date, she has earned $18,925 in 2022, and $37,425 since her first sophomore start in November. Fox looks forward to watching her homebred compete this year, but should suspensory issues emerge again, she will bring Sly Little Fox home to begin the next phase of the mare’s career.

“The plan is to race her as long as she stays healthy and sound. At the point that she is no longer able to race well, she’ll come back home and be a broodmare,” said Fox. “She’s done well for herself.”