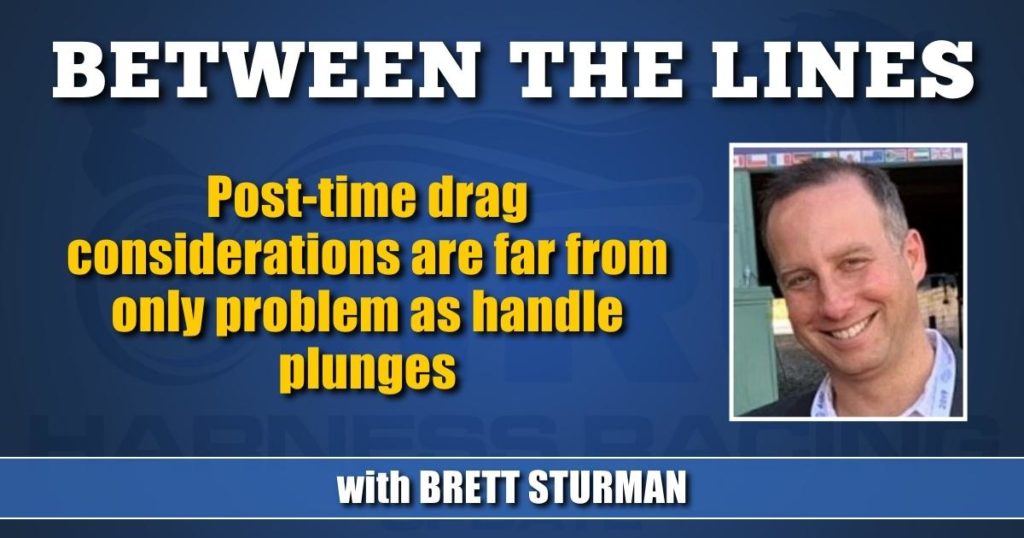 This past week, the Meadowlands announced the end to a short-lived experiment in which its post-time drag had been reduced. Admirably intentioned, the change led to more efficient, time-managed cards over the six-week trial period and was well received by both horseplayers and horsepeople alike. Over that span however, the Meadowlands cited that handle had dropped 22 per cent compared to the same time year over year.

But, in this case, does correlation necessarily imply causation? I don’t think it does.

For starters, as acknowledged by the Meadowlands, last year’s handle figures from January-to-mid-February were materially skewed as racing had been suspended at Woodbine Mohawk. And like many U.S. tracks, the Meadowlands was a beneficiary of re-directed handle that in part would have gone to Canada in a normal time. Using last week’s Valentine’s weekend as an example, in 2021, handle was over $7 million across the Friday and Saturday cards. That’s a number rarely seen over the course of an entire year, and it happened three times last year before the middle of February. With that said, the 2022 Valentine’s weekend handle underperformed even when compared to more traditional benchmarks. The Meadowlands also points out that most of its top drivers have been away this winter, though I think that impact to handle is negligible, if any.

Looking at potential other factors at play, coincidentally, something else happened the same Jan. 7 weekend the Meadowlands began its post-time drag reduction experiment. On Jan. 8, mobile sports wagering was launched across New York state.

The impact of the emergence of sports wagering continues to be debated as to how it may impact racing wagering, but in looking at the dynamics, how could there not be an impact.

Since the launch of sports wagering in New York, handle in that state alone reached a staggering $1.98 billion in its first month. With that type of volume, all it takes are the smallest fractions of a per cent to shift handle figures. For example, just one-hundredth of just one per cent of the amount wagered in New York in one month would equate to nearly $200,000. Is it unthinkable that logic could explain part of the drop in handle seen at the Meadowlands?

And it’s not as if the Meadowlands operates in a silo. Despite no changes to other tracks’ post-time drag changes, the industry overall shows a current 17 per cent drop in total amount wagered year over year. Per race average and per betting interest are also down double digits. It’s still early in the year, but these early season drops are too great to be ignored. Totally separate, while handle is down, race purses are up 28 per cent. How much longer can that be sustained?

Scoffing at the idea that sports betting can present a challenge to racing, I’ve heard industry executives repeatedly make the argument that racing will always have its own appeal because, essentially, who would want to make an even-money bet on a game that lasts over three hours when you can bet on a race and win a ton of money in two minutes?

Long gone is the day of laying $110 to win $100 on a sports event as the only way to make a wager. Every single day on social media I see notifications of sports bettors winning $3,000 on a $5 bet, winning $15,000 on a $10 bet, winning $100,000 on a $15 bet, and so forth. And this happens every single day. How is that possible, you ask? It happens through creative wagering options, such as parlaying in a football game, which player will score the first touchdown, combined with player “x” having over or under “y” number of receiving yards, and team “z” will win the game. In a basketball game, who will be the first player to score a basket, will this player have a triple-double, and will that team win? The creativity of these wagers — and they are available across all types of sports — is something that racing has failed to do, comparatively. Adapt or die, as they say.

Competition from sports wagering is only going to intensify and become fiercer, and now a very real case can be made that the sports wagering platforms offer a better (albeit a still longshot) chance at making big scores. And as a new generation of bettors emerges, ones that are savvier to data, things like stubbornly high takeout rates in racing will eventually become more noticeable and continue to discourage entry into racing.

Anecdotally speaking, I see countless instances on social media of those posting sports wagering tickets who used to solely post racing tickets. It’s not to say that 100 per cent of action from someone that plays the Meadowlands over a weekend has now moved entirely to sports, but even if just 10 per cent of wagers have shifted in states where sports wagering is live — such as harness racing hotbeds of New Jersey and Pennsylvania in addition to New York — that’s a number that’s going to be reflected in the drop in handle this year to date.

Perhaps I’m underestimating the impact of having a track show 0 minutes-to-post and thus having that track appear at the top of the online platforms wagering menus impacts handle. But it still doesn’t seem like the “right” way to go about staging a product.

At the same time, I guess there’s been some proven validity to it, so like tracks that have tried the same experiment prior, I don’t blame the Meadowlands for going back and increasing the time between races in however way they see fit if it can help to stop the bleeding. But, it has to be known that there are and will continue to be larger issues at play.