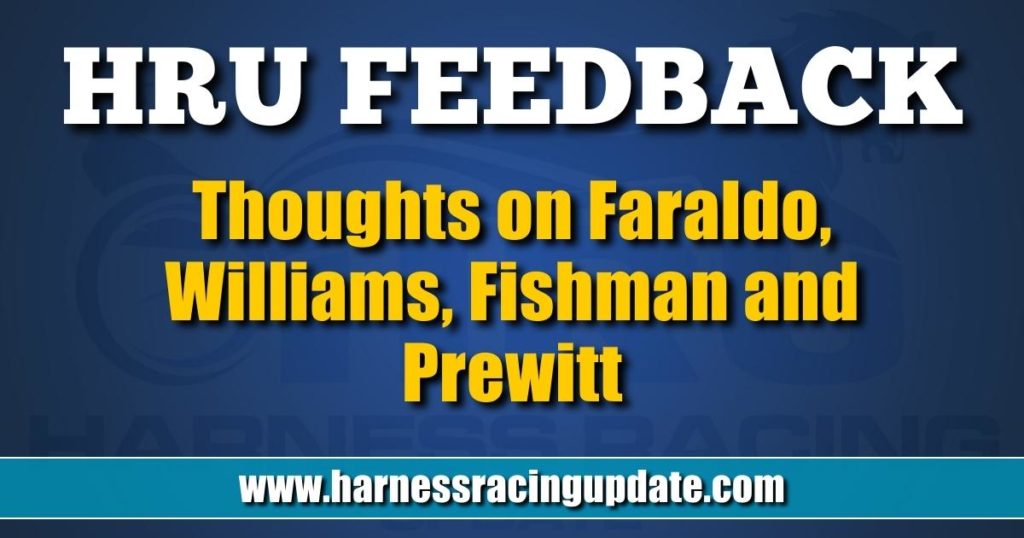 In response to the issues that Faraldo raised last week (full story here), my intention would be that once I have the information on who is using Lasix I would ban those owners and trainers from racing at my tracks as obviously that would be a serious violation of the rules that we are operating under. As far as the drivers, I think my approach would be to ban those drivers who have young children since they cannot devote as much time to racing at the Meadowlands as those drivers without children. I also plan to look for a new track man so that when it rains hard I will be able to cancel and save money. Lastly, I think I will close Trotters because giving the owners a private club to come and watch their horses race is probably a bad idea. In any case, I want to thank Joe for his suggestions as I know how important integrity is at the tracks he oversees.

I have a big question for Russell Williams (full story here). I saw the list of clients who used Fishman. Is USTA going to yank their licenses? There are big names on that list; and if you believe they only bought “legal” drugs from him, I’ll sell you a bridge. Seriously, these trainers have their own vets. Why go to Fishman? Oh wait, they heard he had better stuff. Quit burying your head in the sand. Meet with them to find out what they bought, when they bought it. Investigate. If you don’t you are the problem. You allow cheaters to flourish. And you punish someone who tried to help clean it up. Your motto of See Something Say Something will become a joke if you don’t find out What they bought. You need to do better!

When considering intellectual discourse, we need to play close attention to arguments, reasons and evidence. Therefore, I very carefully read the three columns in the Super Bowl edition of HRU that dealt with the Dr. Seth Fishman debacle. And I thank Jeff Gural, Russell Williams and Joe Faraldo for their thoughts and observations.

Also, I commend Jeff for the ongoing funding of his integrity program; but wonder what happened to the $250,000 Russell invested to help flush out the racehorse-doping criminals.

Unfortunately, what was not included in the written discourse was why any standardbred trainer on Dr. Fishman’s very long client list would even think about buying medications from the long-disgraced South Florida veterinarian. Way back in 2010, Dr. Fishman was involved with the infamous David Brooks case. Dr. Fishman certainly didn’t perform examinations of the racehorses or establish valid veterinarian relations with his clients. How did we let this happen?

Joe Montana of Super Bowl fame used to say, “if you ain’t cheatin’, you ain’t tryin’.’” I sure hope this hasn’t become the unofficial motto for some of our harness racing connections.

We regularly ask: Why can’t we attract new owners, new horseplayers and new fans”? Perhaps we simply need to take a very close look in the mirror.

North American harness racing differs from European in two main respects, one which is the predictable pedigrees of the entries in the big-time stakes. Surprises are few and far between. It’s like the owners and trainers never dream of racing their ponies on the national campaigns if they are not blue-blooded. No, they are content with racing in the neighboring states of PA, NJ, NY and ON.

So why is the industry shrinking geographic wise?

Defeatism. Useless complaining. Get a life! Up the ante, by “French” stake fees included in the sale and registration. Not all-inclusive, though. Four stakes (2 & 3 YOs) would open for free elims until the finals. This race at Vincennes, Paris on Sunday illustrates the point of diversity: 14 entries, 13 sires.

I’m a long-time harness racing fan from way back in the early 1980s — The Meadows and announcer Roger Huston being my inspiration. Who could forget the greatest race of all time — Dragons Lair’s upset of Nihilator in the 1984 Breeder’s Crown?

For the past few years I have immensely enjoyed the Harness Racing Update newsletters. Well written and very informative, I have learned a lot about the industry, the horses and harness racing history. Thank you. I would gladly pay for this newsletter if ever you decided to charge for it. It is that special.

Also, I wanted to say how much I’ve become a fan of announcer Gabe Prewitt and racing from Pompano Park. Every Sunday through Wednesday I enjoy the racing from Florida as Gabe makes every race an exciting battle. He is engaging and interesting and has done so much for the successful increased handle at Pompano.

Thanks to HRU and Mr. Prewitt.