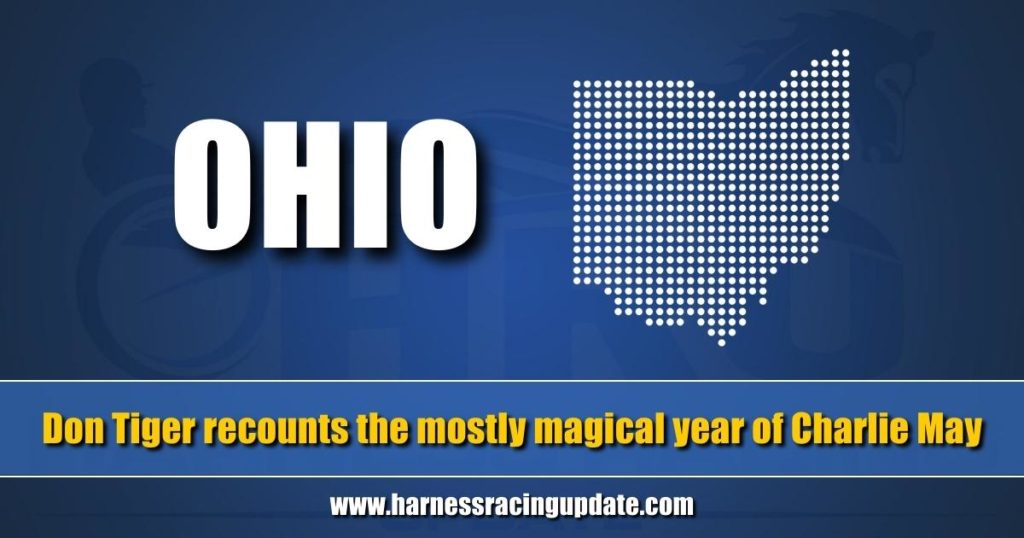 Don Tiger recounts the mostly magical year of Charlie May

The likeable, 51-year-old owner of the Ohio Horse of the Year, Charlie May, enjoyed a dream year despite the ups and downs ranging from breathtaking performances and a world record to illnesses and a questionable DQ.

Charlie May won 2020 divisional honors in Ohio and Tiger had high hopes and big dreams for his homebred in 2021. Tiger’s ultimate goal for Charlie was to compete in the Little Brown Jug, but due to a missed nominating payment that did not happen. They would have to win one of the four sophomore classics – North America Cup, Messenger Stake, Meadowlands Pace or the Cane Pace – to be eligible to supplement into the 76th Jug for a $45,000 fee.

After a workmanlike win in the previous week’s elimination, ‘Team Charlie’ – driver Brett Miller, trainer Steve Carter, assistant trainer Dustin Bothman and caretaker Ben Lindsey – was back at Miami Valley Raceway on April 17 for the $40,000 James Hackett Memorial and the first of many meetings against rival Heart Of Chewbacca. Miller blasted out of post 8 and grabbed the early lead, setting a moderate pace. Dan Noble brought Heart Of Chewbacca out of the three-hole and the pair paced in tandem with a :25.2 third quarter. Charlie May ‘outpaced’ himself broke going into the final turn crossing the wire in last.

“Up until that point, that was the worst racing day of my life,” said Tiger. “When he crossed the wire, I thought we may have a big problem.”

During his four-hour drive back to Pennsylvania, Tiger received several phone calls, including an unexpected one from Missouri State University Veterinary Clinic. His mare, Stipple Hanover, the dam of Charlie May, was sick and near death.

“That was a devastating day,” said Tiger. “Things ended up okay. They were able to curtail her infection and my fears about Charlie were alleviated when Brett called. He said ‘listen before we get into anything, do not worry about Charlie May. He showed me something today. Trust me, when it is all said and done, we’ll be okay.’”

Fifteen days later they were back at Lebanon, OH for the first leg of the Ohio Sire Stakes. Charlie turned in a sub-par fourth-place performance.

“That is the one race that is on me. He scoped sick seven or eight days before that race. Maybe my britches were a little too big. I thought 50 per cent Charlie May was going to be good enough.”

When COVID moved the North America Cup to September, one opportunity to get into the Jug was lost, but Team Tiger used that time and a qualifier and overnight event to get their star back into shape.

The second leg of the OHSS was next on June 19. Charlie May showed he was back in form with a gritty half-length win over Heart Of Chewbacca in 1:49.3, last quarter in :25.4.

“That race was a validation… He raced super that night and sort of got the monkey off our back. We got through the bobble, the sickness and got him back on his game.”

Charlie May had his mojo back and was shipped to the east coast for the Messenger and Meadowlands Pace. He was a solid second in his Messenger Stakes elim and by just a half-length in the $500,000 final to American Courage, who also needed a Messenger win to be LBJ eligible.

Tiger put up $17,000 worth of supplemental and entry fees to be eligible for the Meadowlands Pace.

In the first elimination, Charlie May was upset by the 81-1 longshot Hellabalou by a half-length in 1:49.2 over the ‘good’ surface.

The $700,000 Meadowlands Pace final would be one of the most debated outcomes in recent memory.

Charlie May’s night got off to a rocky start when he was forced seven-wide in the first turn and he never saw the pylons. As the field went into the final turn, it appeared that Southwind Gentry (#4) started a chain reaction event that caused Charlie May, Rockyroad Hanover and Abuckabett Hanover to break stride.

Miller quickly got the gelding back on stride and the pair rallied, crossing the finish line a neck ahead of Lawless Shadow and eventual divisional champ Perfect Sting in 1:48.3. Don Tiger had won the Meadowlands Pace for about 10 minutes as the judges reviewed the video. In the end Charlie May was disqualified and placed 9th.

Tiger handled the DQ like a gentleman and appealed the decision, an appeal that is still pending.

“I like our case,” said Tiger. “We are confident that they will give us the result as the video evidence clearly shows Southwind Gentry caused the entire interference and the judges made an arbitrary and capricious decision without ever talking to any of the drivers. The appeal was not about the money but about giving the correct result for the history books for Brett Miller, Steve Carter and Charlie May.”

Charlie May returned to the Buckeye state and won the third leg of the OHSS at MGM Northfield Park and a $60,700 division of the Ohio State Fair stakes at Eldorado Scioto Downs. His performance ensured an invite into the $300,000 Carl Milstein Memorial at Northfield.

Saddled with post #7, Miller sat patiently in the early stages and used a timely miscue by Heart Of Chewbacca in the third turn to get into contention. As Northfield’s track announcer Ayers Ratliff noted, “Charlie May was in a different gear than the others” and cruised to a 4 3/4 length win in a world record breaking 1:48.4.

“Charlie warmed up terrible that day and he never warms up bad. After the race, we pulled his blood and it was off. He wasn’t 100 per cent that night and still set a world record. That was a magical night.”

Tiger came into the $300,000 OHSS Final at Northfield Park on Sept. 5 full of excitement and confidence. During that mile Charlie May took everyone’s best shot and found himself a neck short in second, upset by Borntobeshameless and Dan Noble.

“That was the worst loss of my career. He had a good post and he deserved to win that race. Everyone came after him, a tag-team effort… I make no excuses. He got beat.”

Little Brown Jug week had arrived and unable to obtain an emergency order to allow his Jug entry, Tiger was relegated to enter the $54,350 division of the Ohio Breeders Championship.

Dexter Dunn, who substituted for an ill Brett Miller, guided the son of McArdle to an easy OBC Score in 1:55.2.

Charlie May was done with his Ohio opponents and would then take on the Grand Circuit’s best.

A pair of Lexington starts resulted in a win over Perfect Sting in the Bluegrass Stake and a fourth place finish in the $500,000 Tattersalls Pace (beaten by 1 length) despite leaving from post #12.

Charlie May won his Breeders Crown elimination, but came up a length short to Perfect Sting in the $500,000 final.

Charlie concluded his season with three starts in Delaware – a win in the $164,750 Matron, a fourth in the elim and a third in the $310,000 Progress Pace final.

“He developed a quarter crack and raced all three races in Delaware with that. It was a day-by-day thing. We could have scratched him at any time.”

“The Matron was awesome. It was an opportunity to validate himself against some of the top colts in the country.”

Charlie May completed his season with a 10-6-1 mark in 22 starts, earning $879,400. He easily won divisional honors and was named the “Ohio Horse of the Year” at the annual Ohio Harness Horseman’s Association banquet.

Tiger is now looking forward to another successful year in 2022.

“I just made out his stakes schedule. I am going to a little light on him. The Graduate Series, the Confederation Cup and couple of those Ohio races — the Ewart (Memorial) and Charna (Pace). If we would get an invite to the Battle of Lake Erie I would seriously consider that. We are not going to pound on him. I will be a little conservative with him, 14 -18 starts.”