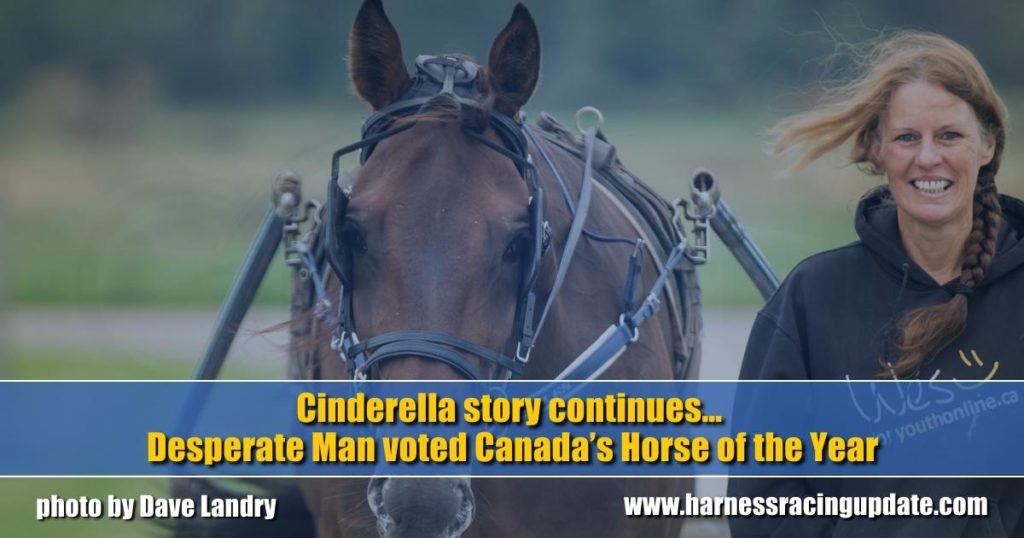 The gelding’s storybook sophomore season was a family affair. Owned by trainer Kathy Cecchin, her husband John, daughter Nicole and their son-in-law Paul Davies, the son of Shadow Play—Dreamlands Latte recorded eight top three finishes and earned in excess of $767,000. In six Ontario Sires Stakes races, he had two victories including the season finale OSS Super Final. But the highlight of his year was his popular victory in the $1 million Pepsi North America Cup, winning in a lifetime best 1:49.3 with regular driver Trevor Henry in the bike.

This year marked the 33rd edition of the O’Brien Awards, named in honour of the late Joe O’Brien, an outstanding horseman and member of the Canadian Horse Racing Hall of Fame. The awards gala was held virtually due to the COVID restrictions and lockdown in Ontario.

The 2021 season was a tremendously productive and profitable one for Millar Farms of Stouffville, ON, and they were rewarded with three O’Brien trophies. Millar’s homebreds Prohibition Legal and Betterhavemymoney were divisional winners, and to top it off, Millar Farms was the winner of the Armstrong Breeder of the Year Award. Their 26 starters posted 67 victories and eclipsed $2 million in earnings, led by their O’Brien winners along with O’Brien finalist Silver Label, and top performers Powertrain and Aviator.

Moreau of Puslinch, ON topped the charts for all trainers in Canada with 236 wins and more than $3.7 million in earnings. Moreau was the leading money-winning trainer at Woodbine Mohawk Park, Georgian Downs, and Flamboro Downs last year, and conditioned three O’Brien Award winners — Fashion Frenzie, Wheels On Fire and Grandma Heidi.

Grant has owned horses for decades and adds to his O’Brien collection with bronzes for Wheels On Fire and Grandma Heidi. Winning the Older Pacing Horse title, Wheels On Fire scored 22 top-three finishes from 26 races and earned more than $282,000 last season. Seven of his 12 victories came in preferred events at Woodbine Mohawk Park and two were posted at The Meadowlands.

Grandma Heidi was the voters’ choice for Older Trotting Mare. She was a model of consistency during her five-year-old campaign, recording 19 top-three finishes in 32 starts and amassing $126,625 in earnings. The daughter of Muscle Mass raced primarily in the upper conditioned and preferred ranks at Woodbine Mohawk Park but did venture stateside for five races at The Meadowlands in the springtime

Blais has conditioned multiple O’Brien Award winners over the years and added the O’Brien Award of Horsemanship to his resume for 2021 while he managed successful stables on both sides of the border. The Quebec native, who is the private trainer for Determination, sent 44 winners postward and eclipsed $2 million in earnings for the sixth consecutive year. $1.35 millions of that total was earned in Canada where he races primarily at Woodbine Mohawk Park. In 2021, Forbidden Trade was a multiple stakes winner, posting victories in the Crawford Trot at The Meadowlands, The Earl Rowe at Georgian Downs, The Caesars Trot at Hoosier Park and The TVG Open at The Meadowlands. O’Brien finalist Donna Soprano was a winner in The Elegantimage and Simcoe Stakes at Woodbine Mohawk Park and The Del Miller at The Meadowlands. Enavant was the 2021 Potomac Pace winner at Rosecroft Raceway under Blais’ conditioning.

MacDonald of Guelph, ON took home his first O’Brien trophy as the Keith Waples Driver of the Year winner. MacDonald smashed his previous earnings record in 2021, driving horses to more than $7.5 million in earnings. The PEI native topped the Canadian driving charts for wins and earnings during his dream season and was also the winner of the Lampman Cup as the Ontario Sires Stakes’ leading driver. His stakes triumphs included the Maple Leaf Trot with Lindy The Great, the Battle of Waterloo with Betterhavemymoney, a Matron Stakes win with Threepointbluechip, and Champlain Stakes with Silver Label and Adare Castle. MacDonald won three Ontario Sires Stakes Super Finals, 18 Ontario Sires Stakes Gold divisions and was the regular driver for two O’Brien Award Champions – Prohibition Legal and Betterhavemymoney.

Prohibition Legal was voted Two-Year-Old Pacing Filly of the year following her near perfect rookie season, winning eight of nine races and earning more than $564,000. The Big Jim filly had a perfect six for six record in the Ontario Sires Stakes and scored her richest victory in the season finale Ontario Sires Stakes Super Final.

In the Two-Year-Old Pacing Colt division, Betterhavemymoney took the O’Brien. The Betterthancheddar gelding hit the board in seven of 10 races with four wins and more than $335,000 in earnings. The highlight of his season was a sweep of the elimination and final of Grand River Raceway’s signature event, The Battle of Waterloo.

Scarlett Hanover picked up her second consecutive O’Brien trophy, this time in the Three-Year-Old Pacing Filly division. The Bettors Delight filly hit the board in 11 of 16 races, earning more than $586,000 for her sophomore season, which included a sweep of the Jugette and a dominant victory in the Ontario Sires Stakes Super Final.

Lyons Sentinel won the Older Pacing Mare division following a stellar season that included 16 top three finishes in 19 starts for over $827,000 in earnings. The daughter of Captaintreacherous put together an impressive seven-race win streak that kicked off in July with the Clara Barton, and included the Lady Liberty, Roses Are Red Stakes, a sweep of the Milton Stakes and ended with the Dayton Distaff in October.

Venerable was voted Canada’s Two-Year-Old Trotting Filly of the year following a phenomenal freshman season. The daughter of Walner won nine of 11 races, surpassed $1.1 million in earnings, and racked up many stakes victories, including a sweep of the Peaceful Way Stakes and an impressive win in the Mohawk Million on Canadian soil.

In the Two-Year-Old Trotting Colt division, Duly Resolved earned the O’Brien following a rookie season that boasted an impressive 10 top-two finishes in 12 races with $631,000 in earnings. The son of Resolve had three Ontario Sires Stakes wins, a win in an elimination of the William Wellwood Memorial and runner-up finish in the final, along with victories in a division of the Champlain, the OSS Super Final and the Mohawk Million.

Up And Ready took divisional honours for Three-Year-Old Trotting Fillies. Her season included 12 top-three finishes in 15 starts and more than $361,000 in earnings with wins in two Ontario Sires Stakes events, including the season ending Super Final, and the SBOA Stakes.

The O’Brien for Canada’s Three-Year-Old Trotting Colt of the Year went to Fashion Frenzie. The son of Archangel won 50 per cent of his 12 races and almost $525,000. Three of those victories were in Ontario Sires Stakes events, including the Super Final. He also swept the Goodtimes Stakes.

Perfetto took home his second consecutive O’Brien trophy in the Older Trotting Horse category, enjoying another stellar year. He posted 18 top three finishes in 24 races, which included six wins in the preferred ranks at Woodbine Mohawk Park while bankrolling more than $253,000 in earnings.

Future Star winner Kyle Bossence has become a household name at Ontario’s B tracks and enjoyed a career year in 2021, training 69 winners from 316 starters, with earnings exceeding $444,000. The Arthur, ON resident was the leading dash-winning trainer at Grand River Raceway and posted triples at the Elora oval on September 20 and 27. One of his top performers last year was Partyintheshadows, who put together a four-race win streak at Grand River in the summer. Bossence also led all trainers at The Raceway at Western Fair in wins and earnings.

Here is the complete list of 2021 O’Brien Award winners

Owned by: Millar Farms, Stouffville, ON

Owned by: Millar Farms, Stouffville, ON

Owned by: Threelyonsracing, Brantford, ON

Owned by: Brad Grant, Milton, ON

UP AND READY (Kadabra—Glide By)

Owned by: Brad Grant, Milton, ON

Somebeachsomewhere Horse of the Year

Armstrong Breeder of the Year

Keith Waples Driver of the Year

Trainer of the Year