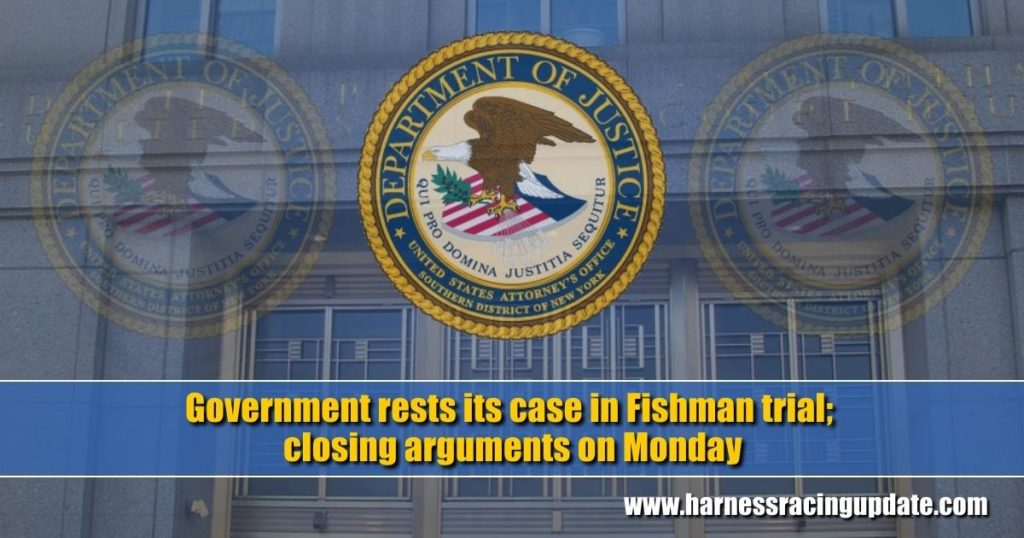 New York federal prosecutors in the horse-doping trial of Dr. Seth Fishman neared the finish line Friday (Jan. 28), bringing their case to a close after calling 11 witnesses and presenting evidence from FBI wiretaps.

A short time later, the defense rested their case without calling any witnesses or putting the accused veterinarian on the stand to testify.

Without the jury present in the Manhattan courtroom, Vyskocil told Fishman he had a right to testify but was under no obligation.

“So, it’s your decision not to testify Dr. Fishman?” the judge asked.

“That is correct,” Fishman said.

“And it’s your decision alone not to testify?”

“That is correct,” Fishman said.

The conclusion of testimony sets the stage for the next phase of the trial: closing arguments followed by jury deliberations after the judge issues instructions on the law. Eight women and four men comprise the jury.

Vyskocil told both sides that summations would commence Jan. 31.

Fishman, 50, was one of 27 horse racing insiders arrested in March 2020 in the biggest horse doping bust in U.S. history. Those charged included two prominent trainers, Jason Servis, who is awaiting trial, and Jorge Navarro, who pleaded guilty and was sentenced to five years in prison. Fishman is the first to go to trial in the case.

Prosecutors have accused Fishman of manufacturing illegal performance-enhancing drugs that harness and Thoroughbred trainers, including Navarro, administered to their horses to win lucrative purses and enhance their reputation. Prosecutors say those charged acted without regard to horse welfare, risking breakdowns and death.

Prosecutors allege that Fishman was especially sought after because he claimed that his products wouldn’t appear in customary post-race testing.

Fishman is charged with two counts of conspiring to violate adulteration and misbranding laws. If convicted, he faces a maximum of 15 years in prison.

He went on trial Jan. 19 with Lisa Giannelli, who worked with him for 18 years. Vyskocil granted her a mistrial after her lawyer tested positive for COVID-19 Jan. 24.

Fishman contends that he carried out the accused activities in the good faith belief that he was practicing veterinary medicine.

On Friday, prosecutors set up a table in front of the jury box with dozens of boxes and bins containing vials of substances worth tens of thousands of dollars, seized at the time of Fishman’s initial arrest in 2019. Prosecutors say the vials contained PEDs.

Additionally, Federal Bureau of Investigation agent Jarrett Concannon testified that during a search of Fishman’s business in South Florida last month, he took photos of the same products stored on shelves.

Prosecutors say the search showed Fishman was in possession of PEDs in violation of his bail conditions.

The government’s witnesses were a varied assortment. They included a woman who worked for Fishman and his Equestology business in South Florida for five years and testified after agreeing to a non-prosecution agreement with prosecutors.

They further included Ross Cohen, a defendant in March 2020 indictments. He agreed to flip as part of a cooperation deal with the feds.

Also testifying were two current trainers, Adrienne Hall who has small stable of harness horses in Florida, and Jamen Davidovich, who ran principally in Ohio in 2021 and has a start this year in New York.

Each testified Fishman supplied them with PEDs for their horses after reaching out to the veterinarian a few years ago.

As part of their case, prosecutors played excerpts from more than two dozen wiretaps that captured Fishman discussing horse doping and bragging that his products weren’t “testable.”

“Don’t kid yourself,” Fishman is heard saying to an unidentified male individual on the other end of the line in a wiretap from April 15, 2019. “If you’re giving something to a horse to make it better, and you’re not supposed to do that, that’s doping. You know, whether or not it’s testable that’s another story.”