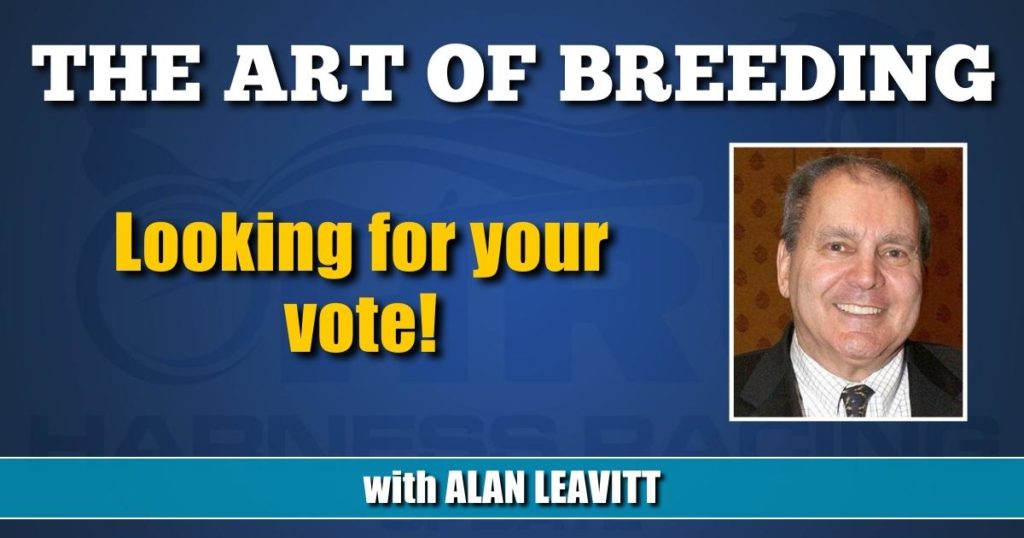 Looking for your vote!

I admit to being miffed when none of my pieces made HRU’s list of the 10 most read stories of 2021. I was told that a story’s value is not judged by how many people read them and that explaining the difference between the phenotype and the genotype is a narrow topic that didn’t capture as much imagination as stories about fixed races and incompetent racing commissions.

Well, sir, as Frank Ervin used to say, I could tell a great story about a certain racing commission if I wasn’t leery of the response it might get. When you’re up against people who have no respect for the truth, it’s best to tread lightly, or, to continue with the clichés and remember that you can’t fight city hall.

So, in an attempt to become a contender to the Top Ten, let me bring you up to date on the Horseracing Integrity and Safety Act (HISA).

First, the Lord High Muckety Mucks from the thoroughbred industry will no longer have the support and cooperation of the United States Anti-Doping Agency (USADA). That means that their stated goal of great, uniform drug testing across the entire spectrum of horse racing in America likely will not happen.

Then, as questions continue to be asked and not answered as to the cost of HISA, even Ed Martin, the voice and leader of the Association of Racing Commissioners International (ARCI), has expressed concern about what the costs could amount to.

Here a personal note: While the Hambletonian Society has announced its support for HISA, it was not put to a vote of the full board. Had that happened, as the longest serving Society member, I would have voted against supporting HISA. Not that it will stop the earth from revolving around the sun, or the moon from controlling the tides of the Seven Seas, I have always opposed HISA, and always will.

One should understand that HISA was passed by the U.S. Senate as a tack-on to an entirely unrelated bill. This scheme was conceived and carried out by Mitch McConnell, the senior senator from Kentucky. McConnell is heavily supported by the thoroughbred industry in Kentucky.

I think there’s a word for people who will sell themselves when there’s enough money being offered, but at the moment it escapes me.

For the record, Russell Williams, the president of the USTA, has always seen the dangers inherent in HISA. He is personally financing the lawsuit brought by the USTA v. HISA. Since his litigation was just announced, it’s been joined by several racing states and racing organizations. While I have faith that Russell will prevail in court, I think there’s also a real possibility that the Hisers will come to their senses, fold their tents, and quietly slink away.

There’s also a new complication in the already complicated Kentucky Derby caper involving Bob Baffert and Medina Spirit. For reasons known only to themselves, the stewards involved in the poor horse’s positive test have yet to hold the hearing that would move the case along.

Here, a personal observation about Baffert and his flimsy excuses that have been accepted by various racing commissions RE: his numerous positive tests. To criticize Baffert for the slaps-on-the-wrist he’s been dealt is to miss the point here. If anyone is at fault here, it’s the racing commissions which failed to take Baffert’s offenses seriously.

The most egregious example involved the positive test of Justify in a stakes race in California that preceded the Triple Crown. In that case, the California Commission went to great lengths to hide their machinations that resulted in a no-fault decision. That despite the fact the level of whatever the test revealed was, by a big multiple, higher than a level caused by contamination.

My heart quailed when I read the news that Medina Spirit had dropped dead after a work-out. For me, that was a tragedy, although at least the horse didn’t suffer. Someone in harness racing immediately posited that heart failure in horses could be caused by micro-doping of EPO. Somehow I can’t imagine Baffert as a micro-doper.

It seems that now everyone and their great grandfather has jumped on Baffert with everything plus the kitchen sink. The worst of the jumpers is Churchill Downs. They showed the world who they were when they refused to accept an expanded gaming license for Arlington Park in order to protect their nearby casino.

If they give medals of honor for hypocrisy, Churchill should be first on the pedestal.

Somehow all this talk about money reminds me of my favorite, legendary girl in the bar. I’m sure you know the one I’m talking about, the girl who said, “I’m not free, but I am reasonable.”