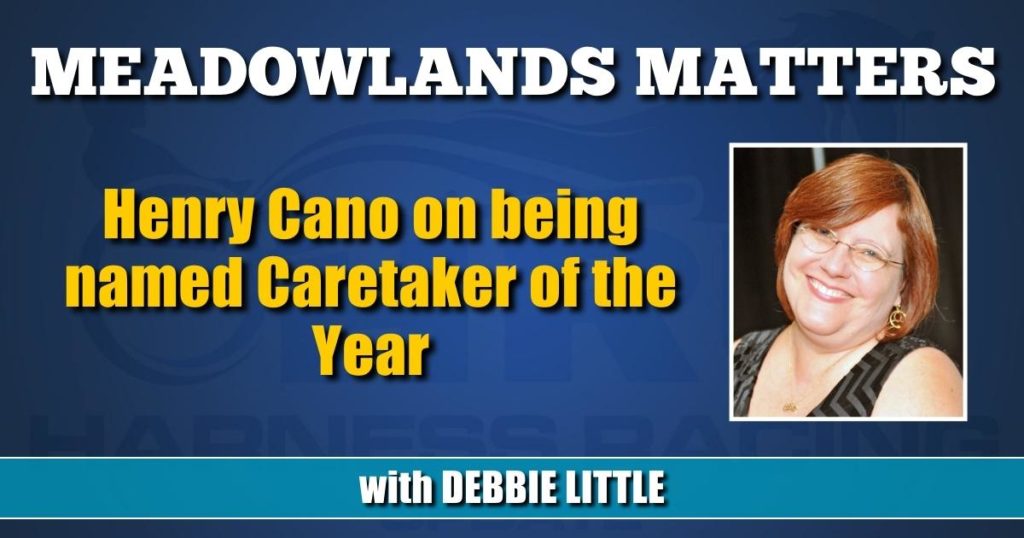 Henry Cano thought he was being punked when he was told he had been named the 2021 Fair Island Farm Caretaker of the Year.

When Sarah Svanstedt told Henry Cano he was named 2021 Fair Island Farm Caretaker of the Year, he thought it was a joke.

“I said, ‘What are you talking about?’” said Cano. “She said, ‘You were nominated to be the Groom of the Year. I think you won.’ I said, ‘Are you serious, or are you just playing with me?’ She said ‘It’s for real. You don’t believe me?’”

It took a couple of days and a call from Ken Weingartner for reality to sink in for Cano.

Cano has worked for Åke and Sarah Svanstedt for three years and took care of six horses last year, including Captain Corey, Ambassador Hanover and Delayed Hanover, who finished first, third and fourth, respectively, in the 2021 Hambletonian. All three of those colts were in Cano’s care from the day they arrived at the Svanstedt stable as yearlings.

Cano was nominated for the Caretaker award by the Svanstedts as well as 10 of his fellow caretakers.

“Never have I heard other workers saying a bad word about him, but that’s because he has his two feet on the ground and he’s just easy going,” said Sarah. “And even with the success it hasn’t changed him one bit.

“Thanks to everyone who voted for him, because without them, it wouldn’t have been possible.”

The winner is chosen by a seven-person committee comprised of members of the U.S. Harness Writers Association (USHWA), all former caretakers themselves.

“I believe it was the outpouring of support through nominations from Henry’s peers highlighting his work ethic and dedication to his horses that saw him garner the most votes from the committee,” said committee chairman Tim Bojarski. “When you have the respect of your peers in any business or occupation or career, that speaks volumes, because those are the people that know the best.

“Everyone on the committee did agree that this is the most difficult award to select one individual for as every caretaker nominated is a credit to the industry and worthy of recognition.”

A total of 18 caretakers were nominated for the award sponsored by Art Zubrod and Leah Cheverie’s Fair Island Farm in conjunction with USHWA. All nominated caretakers will receive a certificate recognizing their accomplishments.

“We should all, as an organization, be thankful to have them as a sponsor,” said Bojarski.

In addition to the recognition garnered by winning this award, Cano will receive a cash prize of $1,000, transportation costs to the USHWA Dan Patch Awards banquet in Orlando, FL, a two-night stay at the host hotel (Rosen Shingle Creek), two tickets to the banquet and a trophy.

It’s interesting to think that this magical season almost didn’t happen for Cano, who was planning to move back home to his native Guatemala when fate intervened via a phone call from his friend Luis, who worked for the Svanstedts. Luis told Cano that they needed help and had a lot of stakes horses.

“What me and Åke see most in [Henry] is that he really cares for the horses,” said Sarah. “Many people go to work for the work, but he goes for his horses every day. He’s a really great caretaker. You can see that it’s more than work for him that he cares daily what’s going on with his horses. We have been blessed to have a good crew behind us and many have worked many years for us so that’s a big help.”

Sarah has never seen Cano stressed and thinks his horses can feel that. Even with three horses in the Hambletonian, he was calm.

“I said to Åke, ‘He’s not a single bit nervous,’” said Sarah. “He was the same as if it was a qualifying day. He’s like, it’s just another race. He’s the same seven days a week and it’s just amazing to see that he can handle that. Having three for the Hambo I would be white in my face.”

Cano likes all of his horses and would prefer not to choose a favorite, but if he had to, it would be Captain Corey.

“I liked his gait,” said Cano. “He learned fast. He was just special from the first day we had him in the stable. It was pretty easy to work around him. He showed that he was a very talented horse and he liked to trot.”

Cano has not been back to Guatemala to visit for a while, but stays in close contact with his family, who are proud of his accomplishments even if he’s too humble to call and tell them about his most recent achievement.

“They don’t know yet, but I think they’re going to find out soon,” said Cano. “In the Hambo, I didn’t tell them anything but they found out. They said, ‘I saw you in a picture.’ And I said that wasn’t me and they said ‘Yes, it was you.’