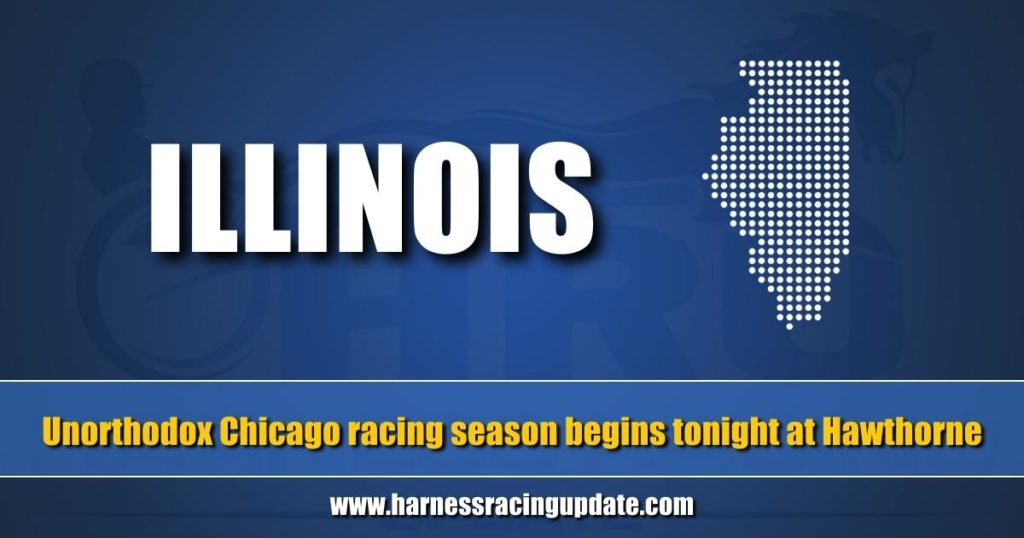 The most unusual year in Illinois harness racing since pari-mutuel betting on the sport was inaugurated at Maywood Park in 1946 will begin tonight (Jan. 7) at Hawthorne Race Course.

For the first time since thoroughbred racing was restored at Hawthorne in the 1922 after being banned in 1905, Chicago is a one-track town.

The decision of corporate overlord Churchill Downs, Inc. (CDI) to discontinue racing at Arlington International Racecourse following the 2021 meeting and sell the property to the Chicago Bears for redevelopment left Hawthorne as the only track in the metropolitan area.

As a consequence, the harness horses and thoroughbreds will be time-sharing.

After the winter harness meeting ends on March 20 the thoroughbreds will take over the track for an April 2-June 25 meeting.

Then, the standardbreds will reclaim it and race from July 2-Sept. 11.

On Sept. 23 the thoroughbreds will return for a meeting that runs through Dec. 31.

The only other track in Illinois with an extended meeting is Fairmount Park in downstate Collinsville, which will hold thoroughbred racing from April 19-Sept. 24.

The status quo is a far cry from the 1970s when there were sometimes seven racetracks in the Chicago metropolitan area — Maywood, Hawthorne, Arlington, Washington Park, Sportsman’s Park, Balmoral Park and Aurora Downs — plus three others elsewhere in Illinois: Fairmount, Cahokia Downs and East Moline Downs (later known as Quad City Downs).

Except for Maywood all of them at one time or another conducted both standardbred and thoroughbred racing.

Over the years, fires, bankruptcies, attrition and corporate obsession with maximizing revenue took their toll.

Dick Duchossois rebuilt Arlington following the 1985 fire into what Architectural Digest has hailed as “the world’s most beautiful racetrack.” What he wanted to do when he merged it with the parent company of America’s iconic racetrack in 2000 was perpetuate his legacy. The merger gave him 25 per cent interest in the parent company, making him by far the biggest shareholder, and three seats on the board of directors. Within a few years his holdings had increased to about 28 per cent.

But, rather than preserving Duchossois’ beloved track, unwittingly his merger of Arlington with CDI ultimately inflicted incalculable damage on both thoroughbred and harness racing in Illinois.

Duchossois was 78 at the time of the merger and during the ensuing years, much to the quiet chagrin of the CDI hierarchy, he continued to operate Arlington as he always had, emphasizing high quality first and foremost rather than putting paramount importance on the bottom line as the other CDI tracks were doing.

But as Duchossois grew older (he turned 100 on Oct. 7) he and his family began selling their stock and in 2017 he left the CDI board of directors. Today, the family has only a 6.8 share and no seats on the board.

CDI chief executive officer Bill Carstanjen is calling the shots at Arlington and his corporation has evolved into an entity whose main focus is on casino gambling.

In 2019, CDI bought a 62 per cent interest in Rivers Casino, the biggest money-maker of the 10 casinos operating in Illinois.

A massive 2019 Illinois gambling expansion bill gave Arlington and Hawthorne what they and horsemen had lobbied long and hard for — the right to conduct casino gambling at the track with a portion of the proceeds flowing into purse accounts.

But, in an abrupt and unexpected about face, CDI declined the opportunity to make Arlington a racino. Given its longstanding push for a racino, Illinois racing insiders were at first stunned but then, after CDI announced that it was taking bids for the sale and redevelopment of Arlington, the real motive became clear.

Rivers Casino is a 20-minute drive from Arlington and eliminating the racetrack not only would prevent it from having a competing casino it also would wipe out nearby thoroughbred racing competition for gambling dollars.

Illinois Racing Board member Alan Henry asserted that “the shuttering of Arlington Park will be nothing less than a brutal clear-cut through the entire sport… the fault for this deformed calendar  —most of it — belongs to Churchill Downs, Inc.”

So now Hawthorne during its harness meeting will embark on the first attempt to try to repair some of the devastation that CDI has wrought.

Although Hawthorne has received permission from the Illinois Gaming Board to become a racino and has begun construction work the project is proceeding slowly. It’s uncertain when the casino will open and start contributing to the harness and thoroughbred purse accounts.

The 2019 legislation also calls for a harness racino to be built in one of six townships in south suburban Chicago, but plans to have one in Tinley Park conducting casino gambling and a race meeting in December 2020 fell through. In the interim there have been no further attempts to pursue a south suburban racino.

The Hawthorne meetings offer a combined total of 76 race programs. They stand in stark contrast to the situation that existed in 1995 when the track had day/night doubleheaders galore during the winter and its cards combined with those at Maywood, Balmoral and Sportsman’s to give the Chicago sulky circuit 516 programs.

There will be racing on Friday, Saturday and Sunday nights through Jan. 30. Thursday night will be added starting Feb. 3 and continuing for the duration of the meeting. Post times will be 3:10 p.m. The weekly calendar will be similar during the summer meeting, except for 7:10 p.m. post times.

The 2021 thoroughbred meeting didn’t end until Dec. 26, requiring a relatively quick changeover for the racing surface, but on Jan. 3 Hawthorne was able to hold 11 qualifying races involving 73 horses. Among them was Rndmnunpredictable, 8-length winner of the $97,500 Erwin F. Dygert Memorial for 3-year-old male trotters, which was part of the Night of Champions extravaganza for Illinois-breds held on Sept. 25, second last night of the 2021 meeting that began on May 7.

Rndmunpredictable’s driver, Casey Leonard, is back in quest of his seventh consecutive driver title and his father, Terry Leonard, will be in pursuit of his second straight trainer title and fourth in five years.

On opening night racing secretary Robin Schadt has put together eight races, and in the $13,700 fourth race for aged pacers Terry and Casey and owner Jim Ballinger will be represented by Fox Valley Gemini, the most accomplished horse in Illinois by virtue of his victories on the Night of Champions five years in a row.

Also competing in the seven-horse race will be Fox Valley Ren and He’zzz A Wise Guy, who finished second and third behind Fox Valley Gemini in the $64,000 Robert S. Molaro Memorial on the Night of Champions.

After the summer Hawthorne meeting ended, the Leonards raced at Harrah’s Hoosier Park and Casino until late in that meeting that ended Dec. 4. They then returned to their training base, the family farm outside Harvard in north central Illinois.

Following a couple weeks of vacation the horses resumed training on the farm in preparation for the Hawthorne winter meeting.

The Wilfong family also figures to be making an impact at Hawthorne. The stable is based in Indiana near Hoosier and is headed by Brett Wilfong, a prominent trainer, breeder and owner. Working closely with him are his son, Kyle, who was second in the 2021 Hawthorne driver standings, and Kyle’s partner, Nicole Agosti, who as a trainer had 19 triumphs, 13 seconds and 13 thirds in 89 starts at the summer meeting.

“I’ll stay here in Anderson and Kyle and Nicole will be staying at Hawthorne,” Brett said. “Nicole will be the trainer (of record). We’ve got 15 we’re prepping to race and seven or eight 2-year-olds. Probably about 10 will stay at Hawthorne. If we’re not happy with the track condition we’ll train them in Indiana and ship them up on the weekends.”

The year’s first measurable snowfall came on Sunday but on Monday the sky was clear and the qualifiers went smoothly.

“The track was pretty good for this time of year,” veteran trainer Jim Eaton said. “I was pleasantly surprised.”

Eaton plans to race between eight and 10 horses at the meeting. His training base is Sawgrass Farm, which is located not far from the former site of Balmoral.

“Since Hawthorne closed (in September) I’ve raced my better ones in Indiana and Ohio,” he said. “We’ll do that again after this meeting ends and then come back in the summer.”

With no important races involving North America’s top horses on the calendar since Balmoral and Maywood closed in 2015, the marquee event of the year in Illinois harness racing again will be the Night of Champions for Illinois-breds, tentatively scheduled for the final Saturday of the summer meeting.

Highlighting the winter season will be six Winter Series races for pacers and six for trotters. Trainers will have both state-bred and open company options.

Even though racing at Hawthorne will be disjointed the 76 programs scheduled are 13 more than the number raced at last summer’s meeting.

This year horsemen also will have at least 10 additional opportunities at the Springfield State Fairgrounds after the winter and summer meetings.

“Nothing is set in stone but we’re planning on four race days from mid-to-late June and six more the last two weeks of September and the first two weeks of October to give 2-year-olds more opportunities later in the year,” explained Tim Norman, bureau chief of County Fairs and Horse Racing in Illinois. “The races will be funded by the Hawthorne purse account but there won’t be any pari-mutuel betting.