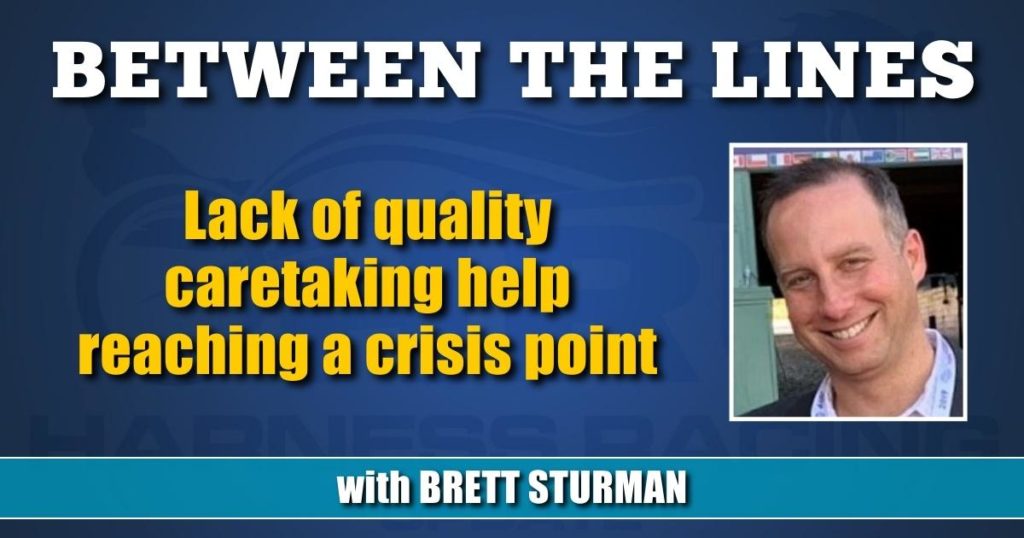 Trainers Nancy Takter and Tom Fanning on the challenges in attracting and keeping good help.

From last week’s Dazzling Dozen HRU Awards (full story here), one of the questions posed was what concerns you most about the future of sport. Some consistent responses included those around reduced attendance and participation, expanding competition and overall business model, though leading trainer Nancy Takter had a different response.

On her personal Facebook page this week, Takter posted the following: “It continues to amaze me that the biggest problem in harness racing is the one that no one mentions time and time again!!! THERE ARE NO WORKERS!! There are no new grooms, trainers, drivers, judges, racetrack staff, etc.! I have turned down so many horses in the last year because I can’t staff the barn to train them! The sport will die because there are no people to work in it. Just scroll Facebook I’m sure you’ll find a post of someone looking for a groom!”

To date, the post has elicited over 100 responses from those across the industry, debating reasons for the predicament.

It was a point worthy of a deeper discussion because unlike more common ways to measure industry health such as sizes of foal crops, sale prices, handle and so forth, having sufficient personnel in place across the industry isn’t something that can be easily measured by hard and fast numbers. It’s something that only those mired in the sports day-to-day can observe.

For Takter, the issue is multi-faceted. Beginning with grooms directly, it’s a matter of both quantity and quality.

“Back in the day, the grooms that worked in the barns cared about their horse and did everything for their horse,” Takter said. “There are still those people left in the business, but they are few and far between. Before, your A-star grooms, if we needed to go back and water horses at 10 p.m. at night because it was 102 degrees all day and horses might not have enough water to get them through the night until we were there the next morning, it was never an issue, people went back and did that. Not many people are willing to do that nowadays. Had it not been for our Hispanic population that takes care of our horses right now we’d be in complete disarray. I think what it comes down to is that a lot of people that we have working in the industry with horses today are people that do this as a job because it’s a job they can get, rather than doing it as their passion, which kind of used to be more of the case.”

From the standpoint of quantity of workers, Takter said, “I feel like that if I go to Tony Alagna’s barn or Linda’s (Toscano) barn or they come to my barn, every person that works for me has worked for them at some point, so we’re just rotating the same workers. It’s the same group of people that end up circling the barns, and there’s really no one else coming in. Tony, Linda, Ronnie (Burke) and I, we’ve had numerous discussions this summer because there’s such a shortage of help right now and we don’t want to steal from each other. Yes, we’re competitors but we’re also colleagues and most of us are friends. Ultimately, we need to figure out how to get more people involved.”

Some comments in the string of replies to Takter’s Facebook post painted the job as a groom as a dead-end position. But Takter sees it quite differently with the groom situation having far larger implications for the industry than just being able to fill the barn.

“I worked as a groom for 10 years and then became a trainer,” she said. “There’s a lot of people like Yannick Gingras, as an example. He groomed for his father and he first came to the U.S. as a trainer, not as a catch driver. Take John Campbell as another example. He started as a groom, became a trainer and then one of the greatest catch drivers ever, and now he’s president of the Hambletonian Society. Additionally, we have numerous judges that used to be drivers or trainers or who worked their way up. If we don’t have grooms, we’re not going to have any drivers, trainers, future charters at tracks, identifiers, people to take samples and drug tests, we’re not going to have paddock judges because nobody is going to wake up tomorrow and say that I want to be a paddock judge; nobody even knows that job exists. But our sport doesn’t work without that position being filled.”

Another argument made by more than a handful of responses to the social media post was that the worker shortage is caused by employment competition from corporations such as Amazon and other chains such as Walmart. It’s a point that Takter strongly disagrees with.

“This is a problem in Europe, too, and all over the world, and it’s that not many people want to do a manual labor job. Take this Wednesday, the weather was s – – – all day, miserable and cold and windy and everyone’s covered in mud. People today would rather sit inside and be warm. Obviously, times change and society changes, but I don’t think you’re solving the issue with money, because I throw money at people to work. I have grooms that make $850 a week to take four or five horses, that’s a good paycheck. And they’re making paddocks and bonuses on top of that. At some points during the summer, they’re clearing over $1,000 a week. One of my best friends is a high school teacher. She makes $42,000 a year and has a PhD in education, and I have grooms that are making $65,000.”

Tom Fanning is a veteran trainer that, like Takter, is stabled in New Jersey. His comments echo those of Takter’s on acknowledgement of help in the barns being harder to come by over the years. He also takes issue on the topic of the groom’s pay.

Providing a comparable example to Takter, he goes on to say, “I have an owner who has a big landscaping company and for his crews to make that money a week, they’re working over 50 back-breaking hours. Years ago, at Gaitway, there were a lot of grooms that were local people from the Freehold borough, they worked at the track and at that time the money wasn’t that good for grooms, but I think that’s changed now.”

It may not yet be something that all barns do, but Takter is one example of providing grooms with more complete compensation packages than what’s traditionally been offered in the position.

“Everybody that works for me is on the books,” said Takter. “I don’t have anybody that I pay cash. Everything gets paid on the books, and everything is done the way it’s supposed to be done. And I don’t think that everyone realizes what the value of that is, because God forbid somebody does get hurt in the barn, I’m not going to say, ‘You’re on your own, good luck.’ I have workers comp that covers that, and you’re paying into your social security. If you’re a full-time groom and you’re on somebody’s payroll in New Jersey you can get healthcare with dental, and we have really good healthcare here. But a lot of them just don’t take advantage of it. I pay all my grooms that want to be on the SBOA insurance every month, but then I have people that don’t even want insurance. I don’t know what the answer is, but I really don’t think the argument that if we paid people more or if we offered 401k’s or offered health insurance all of the sudden, we’d have this influx of workers in our business.”

Taking it a step further, Takter also supports the idea of what would amount essentially to an industry human resource department. A group or department could consist of trainers, caretaker representatives, and would provide standard protocol that all trainers are able to follow. For instance, as barns today are dealing with employees out with COVID, each trainer is determining on their own if they’re paying those staff for sick days or not.

Another thing that both Takter and Fanning agree on is changing times are a focal reason for staff being harder to come by.

“Our industry is more of an agricultural one, but society overall has become less of that and there’s less people growing up around horses and coming off farms,” said Fanning. “You were either born into it or you knew someone who was in it, or you liked horses and that’s how you got involved.”

Similarly, Takter said, “I think it’s unfortunate, but I also think that we as an industry haven’t fostered people’s interest and their love for the horse, which is something we’ve lost.”

The disconnect in not being able to bring new workers into the industry closely parallels other more well-known issues of similar participation decline. How to improve it is obviously the question, but there should be little doubt that as the industry goes, so goes being able to find resources to work in it.